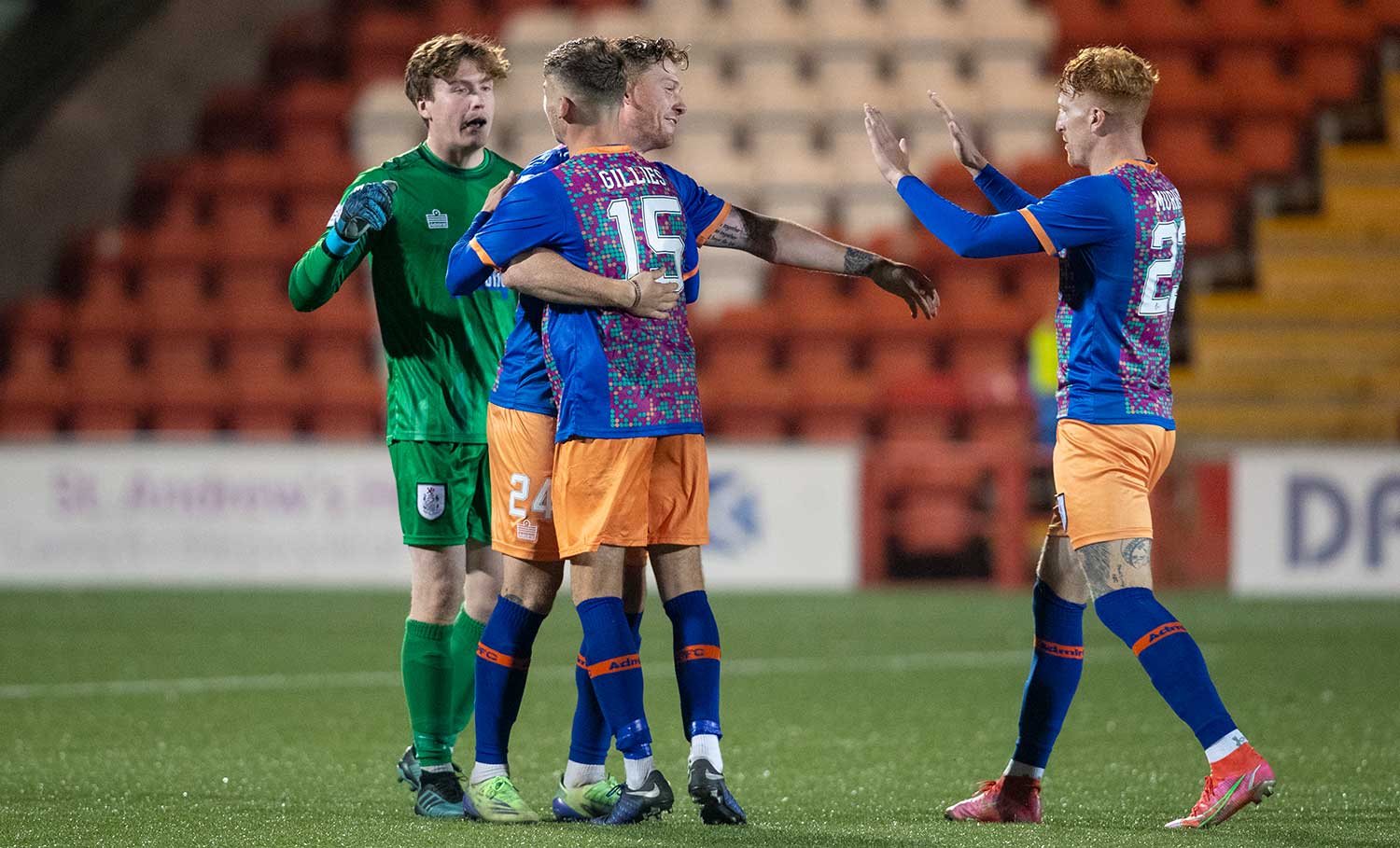 And, football lovers, the good news is that The Laurie Ellis Experience continues ever onwards! Queen’s travelled midweek to Airdrie in the SPFL Trust Cup with the smell of the weekend victory over Falkirk still in the air.

It was no surprise to see a wee shuffle of the pack in terms of the opening line up, but the travelling Queen’s fans were given an early opportunity to see the new loan signing from Liverpool, Luis Longstaff. He started, with Calum Ferrie replacing Wullie Muir in goal, and Max Gillies, Calum Yeats, Calum Biggar, Darren Lyon and Bob McHugh coming in. Six players from Saturday’s starting team dropped to the bench, and Stuart Morrison, taken off injured early at Falkirk, not in the squad.

Airdrie have had a challenging couple of weeks after COVID issues seriously depleted their squad but it was they who really had the best of the first half, giving Queen’s a hard time of it.

That said, we defended well with young Calum Yeats having a particularly good game and Calum Ferrie taking his chance to impress in goal.

Airdrie had a couple of very good chances to score in the first 45 and, indeed, had the ball in the net as early as the second minute when a long throw was headed in by Watson but, thankfully for Queen’s, the referee spotted a push on Kilday and chalked it off.

Rico Quitongo, brother of our own Jai, was causing all sorts of problems on the left and had a great shot from just outside the box deflected wide when Michael Doyle threw his body in the way.

30 minutes in and McGill was sent away, chasing an excellent ball from Quitongo but he slipped in the box as he was challenged by Doyle and even the Airdrie faithful weren’t claiming too loudly for the penalty, even if McGill was.

At the other end, Longstaff drew oohs and aahs as he gave us some trickery down the right, and Biggar continued where he left off with some confident play down the left, but despite some decent crosses into the box, we didn’t threaten too much as Airdrie mopped up well. Luis Longstaff came closest with a header from a cross by Max Gillies, but it was easily picked up by keeper Cantley, who was making his competitive debut.

That first half Airdrie superiority only took 4 minutes after the break to tell. A great move involving four Airdrie players ended with Allan pushing the ball out to Smith and his shot across goal just evaded the clutches of Calum Ferrie to hit the post and go in.

Queen’s certainly picked up as the half wore on though and should have equalised a few minutes later when McHugh met an excellent free kick floated in by Liam Brown but a combination of desperate defending and a bold block by Cantley kept the ball out.

Ferrie saved well from Quitongo during one of Airdrie’s breaks, but Queen’s had gained the upper hand and pushed hard. On came the Queen’s subs to try to snatch the equaliser and it eventually came with six minutes to go. McHugh was instrumental, feeding Kilday, who had come up to support his forwards. Whilst his ball into the box looked an easy one for Walker to control and clear, he made a real hash of it, letting Louis Longridge in. A rush of blood to the head from Walker, and he simply hacked Longridge down; an easy one for the referee to give.

Grant Gillespie scored and whilst Airdrie could have scored at the death when the tricky Easton shot after a good run down the left, Calum Ferrie blocked it and it was into the excitement of the penalty shoot-out.

Liam Brown and Louis Longridge scored theirs, matched by Airdrie, but Tommy Robson had his saved to give Airdrie the advantage.

Grant Gillespie scored his, and then young Ferrie saved the day, and the ball, at Airdrie’s fifth.

Up stepped Simon Murray to equal it at 4 – 4 and, in the sudden death finish, it was that man Calum Ferrie who was the hero again as he saved Frizzell’s penalty, leaving Michael Doyle to finish it all off by banging his spot kick in.

An excellent cup tie and Queen’s progress to the next round in early October.

It’s easy to dismiss competitions like this …. but that’s usually done by fans of teams who have lost! It gives us a chance to utilise the squad, rest some, and it was a cracking cup tie that both teams were obviously keen to win.\

Whilst we took a while to settle I the first half, this was only to be expected with so many changes.

Luis Longstaff looked like he’s going to be entertaining and, pleasingly, the younger lads who came in made a telling contribution.

Young Calum Ferrie can be particularly pleased with his evening’s work.