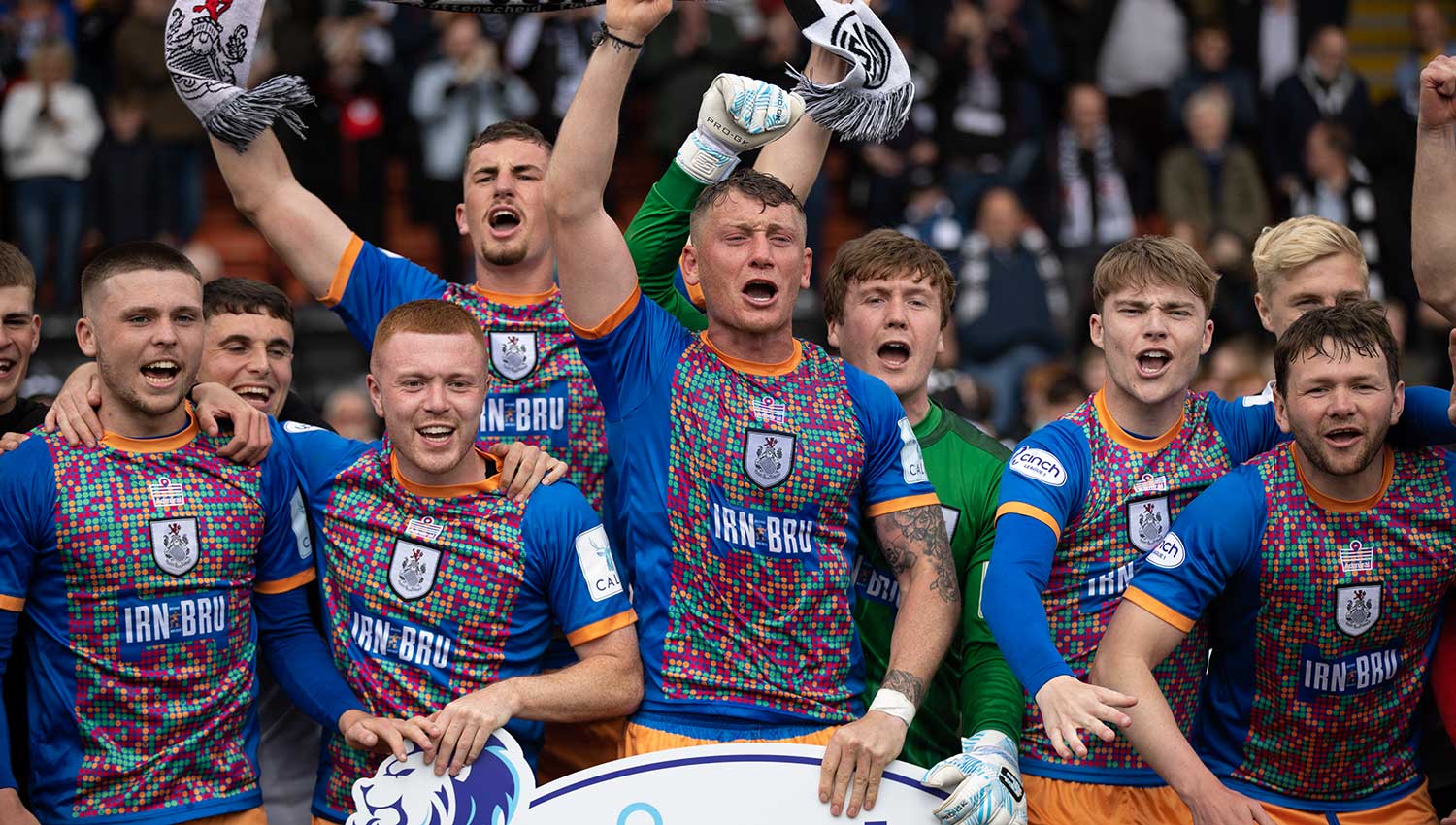 Man of the moment Simon Murray netted an extra time penalty as the Spiders sealed promotion to the cinch Championship.

Queen’s Park made two changes from the first leg draw as Jai Quitongo and Jake Davidson dropped out for Liam Brown and Louis Longridge.

Only 2 minutes in and it was a lively start for the home side as Callum Gallagher forced a terrific save from Callum Ferrie. It all came from a cross ball in from the ride hand side courtesy of full back Craig Watson whose bouncing ball into the box was awkwardly dealt with by Queen’s Park’s player of the year Charlie Fox. It dropped to Gallagher who arrowed his half volley towards the top left-hand corner, but Ferrie was equal to it and punched it clear.

Breakthrough for Airdrie as goal scorer from the first leg Rhys McCabe popped up yet again with a vital goal on the 13th minute. Jonathan Afolabi won a contentious free kick in a dangerous area about 20 yards from goal just left of the “D”. McCabe stepped up and dispatched it magnificently and curled it up and over the wall leaving Ferrie with no chance. 1-0 to the home side.

An almost instant reply from the Spiders courtesy of Connor Smith came on the 17th minute. It was initially a dangerous ball in by Louis Longridge which broke the way of Luca Connell who had the awareness to pick out his teammate Smith at the second attempt and he duly obliged with the finish. It wasn’t the cleanest strike in the world but his deflected curling effort managed to squirm underneath Max Currie’s body and into the back of the net. 1-1. Game on. Terrific response and character from Queen’s to bounce back immediately.

10 minutes later and Luca Connell nearly had the visitors in the lead with a lovely curling effort from his wand of a left foot if it wasn’t for the equal brilliance of Currie to fingertip the ball around the post. A brilliant save from Currie to keep the scores level.

Queen’s Park threatened yet again on the 35th minute. This time it was Louis Longridge who received the square ball from Darren Lyon just outside right-hand side of the box, beat his man with ease before cutting inside on his unfavoured left foot. He tried to bend it into the far corner and it was another terrific stop from Currie.

All square at the break – all to play for.

Just before the hour mark, the lively Luca Connell nearly picked out the bottom left-hand corner and put the Spiders in front but unfortunately his curling effort was millimetres wide of the left-hand post. It was a quick counter attack from the visitors as Liam Brown picked out Connell who was free down the right flank, he drove towards goal and jinked inside onto his favoured left foot and tried to pick out the bottom left corner but it just flashed wide.

A goal saving tackle from captain Michael Doyle kept Queen’s in the game. With 25 minutes left to play, Queen’s defence parted like the red sea and Doyle had to cover and block what was a goal bound effort from Callum Gallagher.

With just 7 minutes left to play, a dangerous long throw from Rhys McCabe bounces all the way to the back post where the unmarked Scott Agnew has his effort smothered by Calum Ferrie. Terrific save to keep the scores level.

In added time, Airdrie nearly nick it at the death as Adam Frizzell sent a rasping volley just inches wide of the right-hand post.

It took just 3 minutes of extra time for the Spiders first opportunity as Simon Murray was released brilliantly by Bob McHugh and the one two was completed by a lovely, floated cross into McHugh who was stretching as his header failed to find the target.

A mere 2 minutes later and Simon Murray does brilliantly to spin McCabe and drive into the box and tried to pick out Smith but Currie makes another terrific save.

Half time in extra time and Queen’s Park have been on top, with Airdrie still in the game.

With 8 minutes to go Queen’s take the lead courtesy of Simon Murray who now has 3 goals in his last 3 matches. It was terrific battling in the middle of the park from substitute Jack Thomson who dispossessed Frizzell, drove forward with the ball 40 yards before playing in Murray down the left who chopped inside and was hauled down. Murray stepped up and sent the keeper the wrong way and slotted the ball into the bottom left-hand corner. 2-1 for the Spiders.

With just 4 minutes to go in extra time, the Spiders threaten again, and it is that man Simon Murray. Initially it was a terrific run and skill by Connor Smith who picked out Murray on the penalty spot and somehow Currie flew across his goal and palmed the ball around the post.

The full-time whistle blows, and it is the perfect end to the season as Queen’s Park have clinched promotion to the cinch Championship via the play-off route defeating Airdrie 3-2 on aggregate.

QPTV - Highlights & Story of the Day