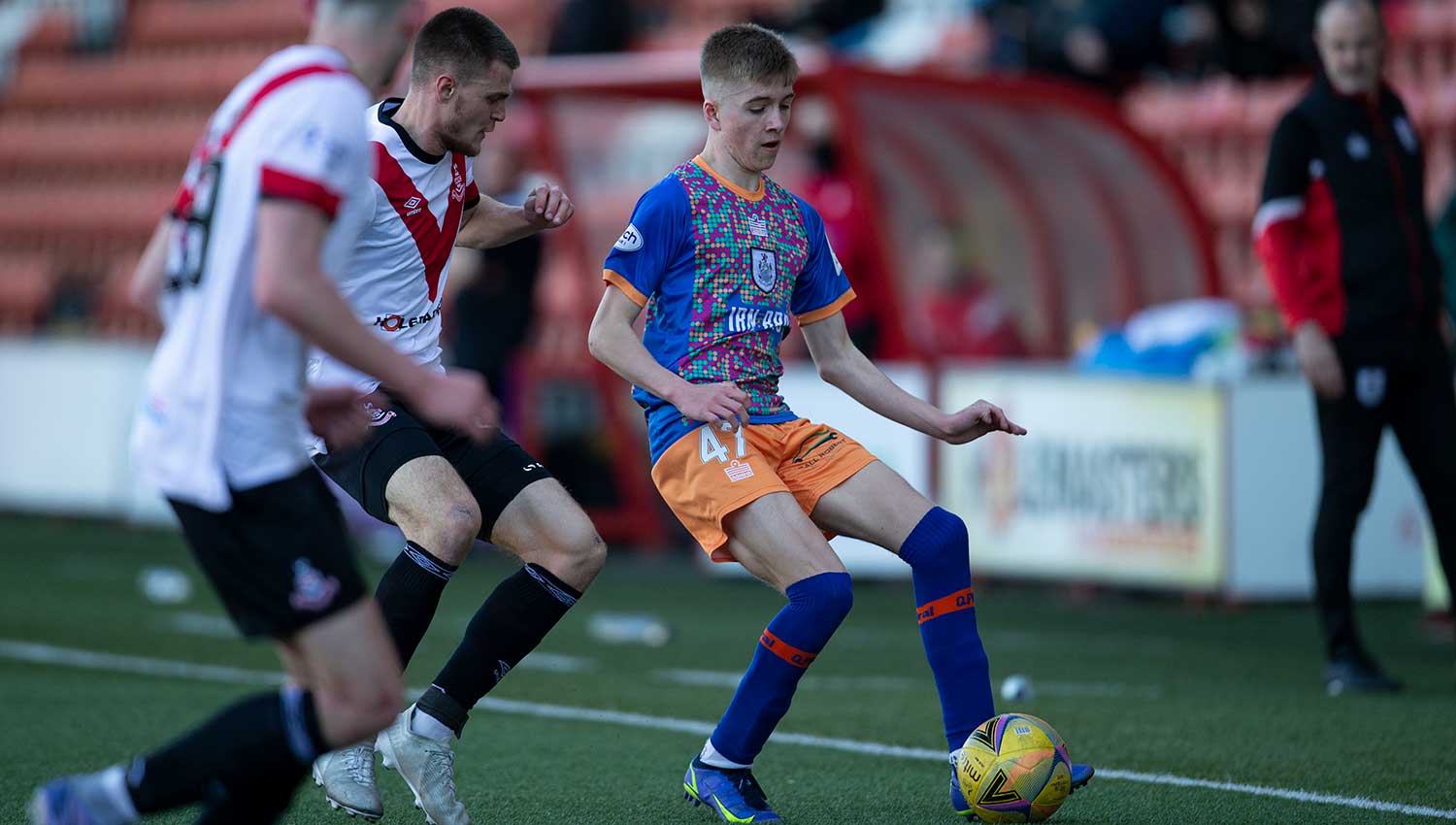 Queen’s Park missed the chance to further strengthen their push for a play-off place after falling to a 2-0 defeat at the hands of Airdrieonians.

The Spiders made two changes to the side that drew with Alloa last Saturday with Tommy Robson and Jack Thomson coming out of the team, replaced by Cameron Bruce and Ronan Darcy. There was a starting league debut today for academy graduate Bruce, with other academy players also on the bench – Alex Fairlie, Liam McLeish, and Zach Mauchin.

Airdrieonians manager Ian Murray made one change to his side that claimed an emphatic 4-1 victory away to Falkirk last Saturday with Craig Watson coming out of the team and he was replaced by Scott Walker. Queen’s would have to keep a close eye on Callum Smith, brother of Queen’s Connor Smith, who bagged a double last Saturday.

After an even start to the match, the first chance fell to Airdrieonians in the 8th minute after a free kick which was swung in from the right was cleared by the Spiders, but the ball fell to Callum Smith whose powerful first-time volley was well saved by Calum Ferrie in the Queen’s goal.

The home side took confidence from this and two minutes later had another chance as Queen’s were camped in their own half and after clearing a cross from the right, the ball fell to Scott Agnew outside the box, but his low shot was dragged wide of the post.

In the 18th minute, there was another chance for Airdrieonians after Calum Gallagher picked up the ball 30 yards from the Spiders goal after good possession from the home side and his low powerful shot was parried by Ferrie and Queen’s managed to clear the ball for a corner.

Throughout the first half, the Spiders were struggling to keep a hold of the ball and move themselves up the pitch which resulted in them not creating many chances. Their only half chances fell to Longridge, but both times they were blocked and cleared by the Airdrieonians defence.

In the 37th minute, the home side broke the deadlock after Smith picked up the ball from the left-hand side and after shrugging off an attempted challenge, he cut in onto his right foot and from the edge of the box curled the ball into the bottom corner.

Queen’s had to try and react from going a goal down and in the 43rd minute had their best chance of the half after good work down the left Connell picked the ball up from just inside the box, but his shot went way over the bar.

In the last minute of the half, Airdrieonians doubled their lead after a corner from the home side was cleared by the Spiders. Airdrieonians managed to recycle the ball and it was again crossed into the box by Adam Frizzell where it found Easton on the left-hand side and his spectacular half volley arrowed into the top corner.

The second half got underway, and Queen’s made no fewer than four changes at half time in the hope that they could improve considerably after their disappointing 1st half performance.

The players that came off at half time were Peter Grant, Louis Longridge, Ronan Darcy, and Bob McHugh and they were replaced by Jake Davidson, Luis Longstaff, Darren Lyon, and Connor McBride.

It was a bold move by Queen’s but after not threatening enough in the first half, it would have been hard not to argue with these changes.

The Spiders did start the second half better but still struggled to create any clear-cut chances.

In the 60th minute, Airdrieonians had the best chance of the second half after Easton picked up the ball from the right and he cut in onto his left foot, but his curling shot just went wide of the post.

The Spiders were battling to try and find themselves a way back into the game and in the 66th minute had their first chance of the second half. After winning the ball in the opposition’s box, Smith drove on with the ball and attempted a shot but it was comfortably saved by keeper Max Currie.

In the 73rd minute, Bruce made way for Quitongo in the hope that his pace and power could cause the home side some problems.

The Spiders nearly pulled one back in the 80th minute after McBride’s shot at goal was parried by Currie and the ball fell into Longstaff’s path but he could not control the ball and it was eventually cleared.

Queen’s were playing much better in the second half and had another chance in the 85th minute after a nice one two in the box led to Connell having a shot but it went over the bar.

Airdrieonians’ second half consisted of them holding onto their two-goal lead and not trying to push for more goals but in the 87th minute nearly had a third after Jon Afolabi faced up to the Spiders defence and attempted a powerful shot, but it went over the bar.

It was a much more spirited second half by Queen’s, but they did not manage to find a way back into the game and left Airdrie pointless.

The Spiders next match will be at home to Clyde next Saturday at Firhill.