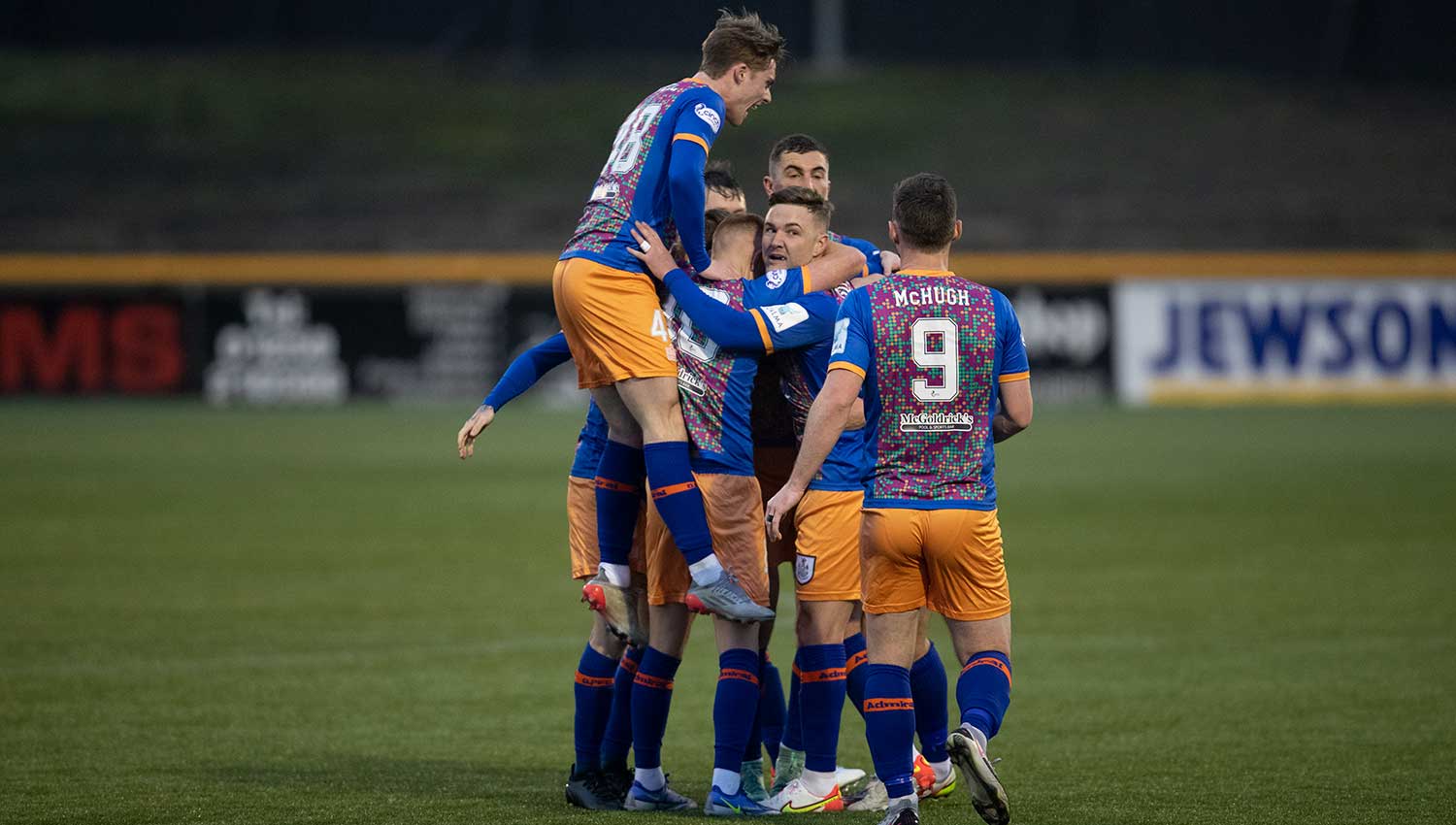 Queen’s Park and Alloa shared the spoils after a 1-1 draw at the Indodrill Stadium.

The Spiders new Director of Football, Marijn Beuker took caretaker charge and made a few changes from Queen’s last outing, a 1-0 defeat away at Airdrie. Out went Davidson, Heraghty and the suspended Thomson, who has now signed permanently until the summer of 2023. The formation changed from 3-5-2 to a 4-3-3 set up in hope of bouncing back from their mini covid break with a win.

Queen’s Park started the brightest, without creating too many clear-cut chances in the opening 5 minutes, being more patient and controlled in possession.

In the 8th minute Steven Boyd picks up the game’s opening booking for dissent after appearing to be fouled by Lee Kilday but referee Alan Muir waved play on.

Just after the 10th minute of the game, Luca Connell whipped in an inviting, dangerous ball into the box that Durnan managed to get his head to and divert away from danger.

With just over 20 minutes gone, Connell gave away a free kick in a dangerous area about 25 yards from goal on the right-hand side. Boyd delivered an inch perfect ball to the back post but Durnan wildly slashed at it and the chance was gone.

The half hour mark sees Henderson lose possession as he appeared to slip, Lee Kilday then robs him of the ball before slotting in Liam Brown who patiently waits for the overlap of Luis Longstaff. He checked back on to his favoured left side before teasing a lovely, lofted ball to the back post. Connor Smith came flying in and powered a header straight at Hutton who tipped it over. The resulting corner from Connell sees a floated ball to the back post where Kilday plants a powerful header towards goal but is cleared off the line by an Alloa defender.

In the 38th minute, the deadlock is finally broken as Bob McHugh holds off the attention of Durnan before teeing up Connor Smith who gets the ball out of his feet before unleashing an unstoppable curling strike into the top right-hand corner. The ball couldn’t have been struck any sweeter and certainly a contender for goal of the season. 1-0 to the Spiders.

Five minutes before half time sees the home side nearly respond instantly with Niang. Grant Gillespie slips in the middle of the park and Henderson robs him before driving at the heart of the Spiders defence. The overlap on the outside from Niang presents an opportunity but he shows no composure in his finish after making a bursting run into the box, as he lashes his shot high and wide of the right-hand post.

Half time at the Indodrill Stadium in Alloa, sees the Spiders have a deserved 1-0 lead.

The first chance after the restart only takes a matter of minutes, and it falls to Queen’s courtesy from a corner kick on the left. Connell expertly delivers the corner, but Kilday can’t convert his header. He made a terrific run across the near post but can’t make a proper connection and sees his header fly wide of the far post. Big chance missed but a positive start to the second half.

Alloa boss Barry Ferguson has certainly had a stern word with his players at half time as after the initial bright start to the second half, Queen’s struggled to get out of their own half.

The first in a series of chances fell to Durnan on the 52nd minute as he rose highest from a Boyd corner before seeing his headed effort soar well over the bar.

Just under-five minutes later sees a quick throw in from the right-hand side gets King in and his fierce effort at the near post is saved tremendously by Ferrie. The resulting corner however sees the home side equalise courtesy of Kevin Cawley. The ball is delivered in by Boyd and is met highest by Niang. Ferrie somehow manages to claw the ball away low down to his left hand side, but is helpless as Cawley taps in the rebound. 1-1 and game on.

In the 67th minute, a terrific run and cutback from left back Robson after a clever one two with Connell sees him drive into the box and pick out Queen’s goal scorer Smith. Queen’s fans were hoping to see the net bulge, however his shot from close range went wide.

The home side were the first team to freshen things up and try and go for all 3 points as Mouhamed Niang made way for Stefan Scougall in the 69th minute.

Beuker made his first tactical change as Queen’s caretaker manager, which saw goal scorer Smith switch to the right-hand side as the returning Jai Quitongo came onto the left-hand side for Luis Longstaff with 20 minutes to go to try and add some fresh impetuous into the attack and push for the winner.

With just under five minutes of normal time remaining both sides go the bench again and freshen things up further. Steven Boyd makes way for the home side and is replaced by target man Conor Sammon. The Spiders bring on Calum Biggar to replace Liam Brown who looked to have picked up a knock.

Calum Ferrie heroically kept the score level as he made a tremendous double save from Conor Sammon from point blank range before captain Michael Doyle slide in and blocked Adam King’s effort on goal.

Right on the stroke of full time Grant Gillespie picked up a yellow card for a foul on Cawley.

The final whistle blew, and it’s a share of the spoils at the Indrodrill Stadium. It was a hard-fought contest with both sides pushing for a winner. On the balance of play a draw is probably a fair result for both sides. Queen’s will be kicking themselves after being in total control of the first half but allowed Alloa back into it and it was a far more even contest in the second half. This result leaves both sides exactly where they were before kick off in 4th and 8th place, respectively.

Next up for Queen’s Park is an away trip to Clyde next Saturday to try and get back to winning ways.