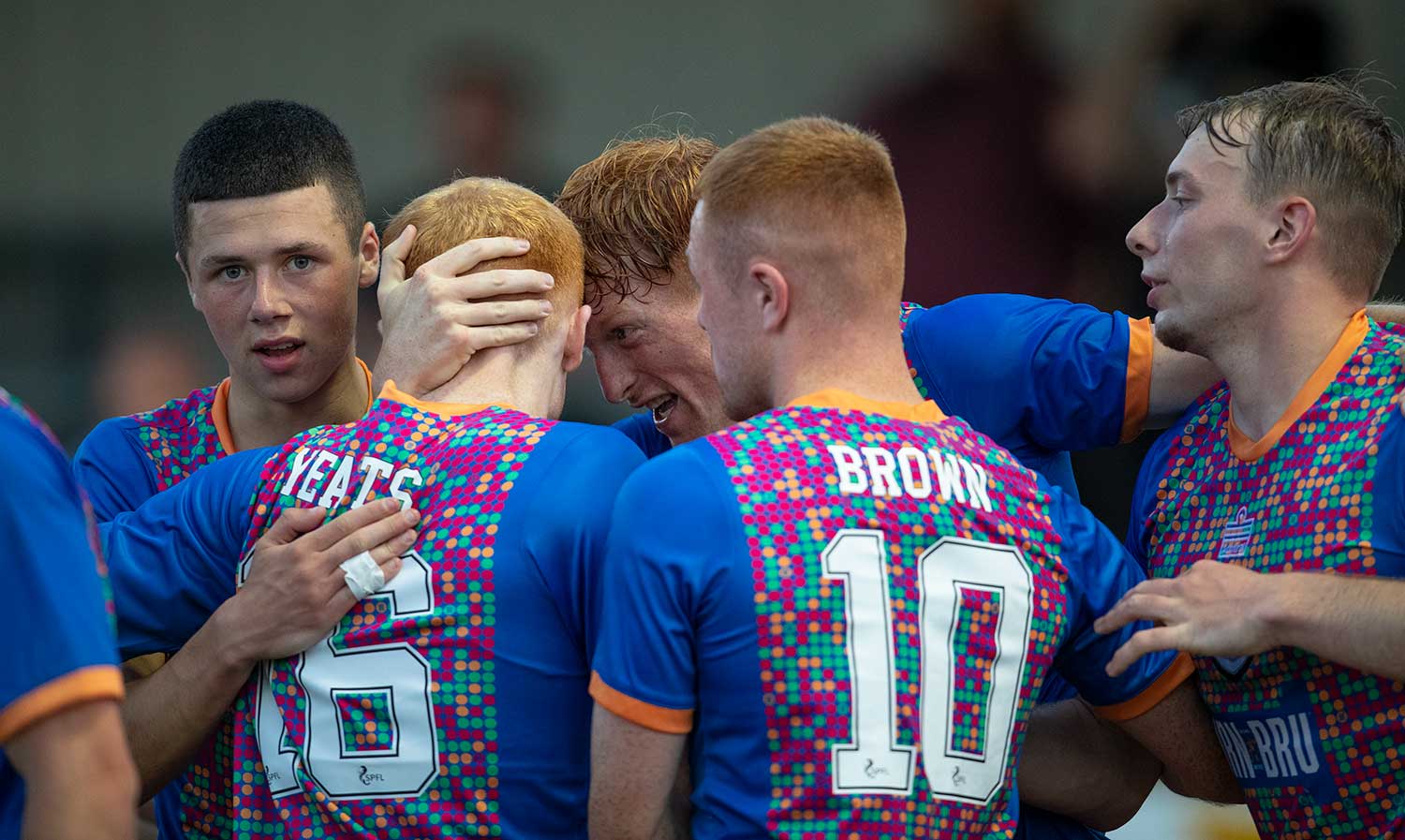 After encouraging displays in the first three matches of their League Cup section, Queen’s travelled to Annan for the final game in their group, and it was great to see that a number of Queen’s fans had made the trip following the late decision to allow away fans access to games. There were two changes, with Calum Ferrie making his debut in goals and Bob McHugh starting. New signing Charlie Fox was rested after his debut on the Saturday, meaning that Jake Davidson moved back to the centre of defence.

Annan have started the season well and have the gargantuan figure of Tommy Goss up front, so it was always going to be a challenging game at set pieces, with the big man a constant threat. This aerial threat was compounded by the long throws of Steele and it only took two minutes for the first chance to present itself. Steele’s shy was knocked on by Douglas, but Swinglehurst at the back post headed wide when he could have done better. That was a quick display of what Queen’s would have to put up with. They also had to contend with the auld fashioned wing style of Chris Johnston, a former youth internationalist, who was outstanding all night.

But it was Queen’s who dominated possession from the off, with the midfield playing a close possession football that had Annan chasing them. Gillespie played deep, just in front of the defence, leaving Moore, the impressive Brown and young Calum Biggar to dictate what was happening as Queen’s pushed forward. Despite being whacked about a bit early on, Biggar grew in confidence during the game, finding space and combining well with Murray in particular. You can see this lad growing in stature the more game time he gets.

Murray started off as he does for the full game, chasing and harrying, with McHugh providing the link with the midfield in this close possession game that Queen’s are playing.

It only took Queen’s 13 minutes to open the scoring. In a well-worked move a few minutes earlier, Gillespie, Biggar, and Moore combined well, with the latter shooting just over. In a repeat of the slick passing play, Moore found Murray out on the left; his pass found Biggar, but his shot was blocked for a corner. Over it came and Annan captain Swinglehurst was pressured by Morrison and headed past his own keeper. Sadly, video evidence stopped your reporter giving that one to the Queen’s man.

Brown continued to buzz about the midfield, continually breaking up Annan moves and in 20 minutes, he crossed for McHugh to head just over. Murray then swooped on a poor defensive header from Swinglehurst to blast the ball over the bar. If there could be criticism at Queen’s in the Airdrie game for not shooting on site, it certainly couldn’t be levelled at them in this game, as the shots came in fast and furious. But it was the threat of Goss that put Annan level. Ferrie had to be smartish off his line to clear from Johnston but, from the resulting corner, Goss towered above Morrison and whilst the ball hit off the side of his head, the trajectory took it on target and past Ferrie. It was against the run of play, but a big guy like Goss at 6 foot 5 is always going to be a threat.

The game continued in much the same vein; Queen’s close passing game entertaining to watch, whilst Annan’s Johnston persevered with the more traditional running game, both styles causing problems. Johnston brought a superb save out of Ferrie in the 31st minute with a 30 yard shot, then Gillespie was dispossessed by Goss who put Anderson in the clear, but Morrison saved the day with a perfect interception.

It was starting to get a bit harder for Queen’s as the half drew to a close; Wallace jumped on a mistake at the back and looked a cert to score, but Ferrie was again off his mark quickly and blocked the shot superbly.

Queen’s had a flurry just before the break; Murray capitalised on a mistake by Swinglehurst but his shot was blocked by Annan keeper Fleming, then he ghosted past two defenders, but was thwarted by keeper Fleming. Gillespie sent a beautiful high ball to Moore; he controlled it with the outside of his foot and, in one movement, teed up his shot, but it was blocked. McHugh shot from the resulting set play, but Fleming was down well to push it past the post.

Annan came out the traps fast in the second half, but that didn’t last long and Queen’s re-established their possession football, with Biggar and Brown in particular dominant in midfield, and Michael Doyle making more of his space on the right flank. For Annan, Johnston continued to be a real thorn in Robson’s flesh, keeping the Queen’s man from supporting his forwards. Murray had another couple of blasts at goal and you could sense his frustration as he tried to start off his scoring for the year.

Biggar was pulled back by Hunter resulting in a booking in the 55th minute as the referee finally lost patience after a series of fouls. A couple of minutes later, a quite superb move involving Doyle and Murray led to Biggar jouking past Lowden and firing in a shot off the side of his boot but just a foot wide. He had another crack at goal a minute later after Brown had dispossessed Johnston and found the youngster in the clear.

Annan were defending very deep and seemed happy to let Queen’s knock the ball about until they ran out of options on the tight pitch. 66 minutes in and Murray was pushed over in the box as he made to go for the ball; that’s a clear a penalty as you’ll see all season but it wasn’t given. However, the referee made up for it five minutes later as Douglas clipped Bob McHugh as he ran into the box. Wallace was booked for protesting but, tellingly, Douglas didn’t question the decision.

Unfortunately, McHugh slipped on the surface as he took his last step before hitting the ball. He ended up on his back end and the ball ended up miles over the bar for the biggest cheer of the night.

Annan had a couple of decent chances before Murray restored Queen’s Park’s lead in the 80th minute. Callum Yeats, on for McHugh, crossed from the left and whilst Murray’s header came back off Swinglehurst, it fell nicely to the Queen’s man who whacked it home.

Lewis Moore, who put in a hard shift, then picked up a ball from Doyle and found time to steady himself, but his shot came off the post.

Coach Laurie Ellis brought on youngster Gregor Nicol for Moore giving Queen’s no fewer that four ginger headed players on the park; surely some sort of Scottish, nay UEFA or even FIFA, record. Queen’s await ratification of this.

A great wee move involving Murray and Biggar set up Nicol but his shot was stopped by Fleming. Annan came back as the game moved into 6 minutes of added time but Doyle then Yeats were quick to block decent chances. Morrison and Anderson then collided with both requiring treatment, Morrison for a cut; foul given to Annan. Gillespie was booked for a comment about the incident, but Queen’s cleared the resultant lob into the box and held on for a deserved, if hard-fought, win.

Queen’s moved to the top of the mini table briefly and have a decent chance of finishing second, but are unlikely to have enough points to qualify for the next round as one of the three best-placed runners up.

On a difficult surface, Brown and Biggar impressed and I just wish I had a tenth of the energy and drive that Murray has. The defence had a hard night with Goss a threat in the middle and Johnston outstanding on the wing in an Annan team that looks well-prepared for a decent stab at competing at the top of League Two.

The four games in the section have been entertaining, with two wins and a draw and an excellent display in the one-goal defeat to Premiership Motherwell, where we could have easily drawn if not won. It’s been a test for the squad and, in my opinion, we’ve passed with flying colours. Goals have been a problem but that’s Simon Murray off and running and if we can have the others pitch in, it bodes well for the season. We look a bit light in numbers but hopefully there will be a return of some of the absentees to bolster the squad for the East Fife game a week on Saturday, our next match, as the League campaign begins.

That said, the youngsters have performed really well when they’ve been asked to step up. Biggar grows with every game and Yeats and Nicol have shown real promise in their cameo appearances. A strong performance from Calum Ferrie in goals; he had a couple of telling saves to make and controlled his box well.

Best man for Queen’s? A bit of a toss-up between Murray and Brown, but the goal-getter gets it for the sheer energy of his performance. Brown continues to excel and Biggar is looking a real prospect.