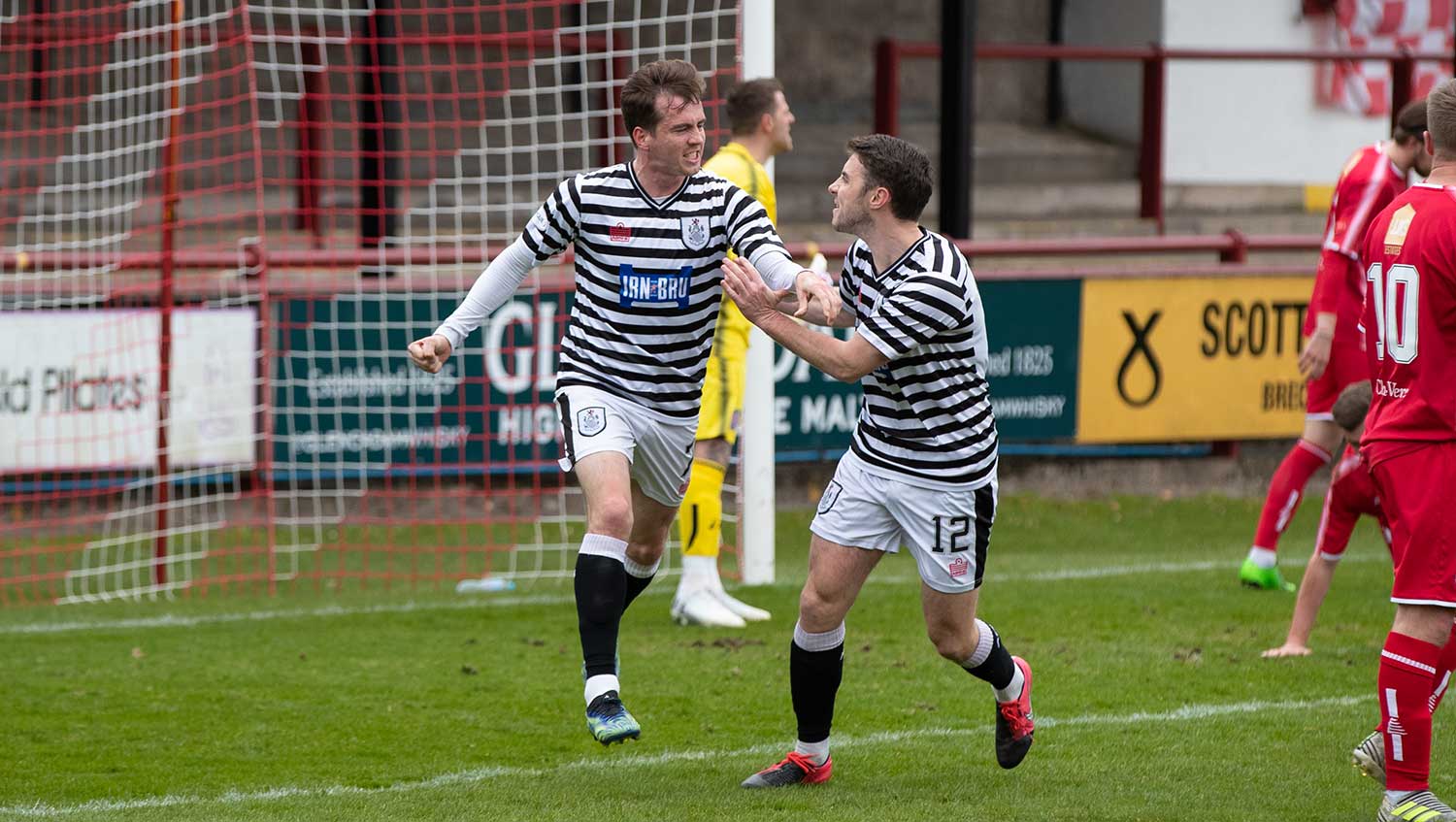 Isn’t it the way of it?  After a terrific debut for Celtic loanee Luca Connell in last week’s convincing 3-0 Hampden win over Stranraer, he’s on international duty this weekend with the Republic of Ireland under 19 squad, who won 2-1 in Wales on Friday.  With a fairly hectic run of matches coming up, coach Ray McKinnon had to shuffle the pack a bit, giving some more of the pool a start.  Also back from injury was Will Baynham.

Regular readers will remember Jai Quitongo giving his opposite number a torrid time in the first game at Hampden in October which Queen’s won 3-0.  Whilst he has dyed his hair since, that was the only change, as he proceeded to give his marker a bit of a roasting in the first half.

After a physical opening couple of minutes in which McIntyre was lucky not to be booked for clipping Grant Gillespie, it only took Queen’s four minutes to score.  Bob McHugh has a snap shot pushed out by keeper Hutton.  The ball came out to Quitongo, who nipped past his man and whipped the ball in low to the front post where McHugh and a defender went for it, with the ball ending up in the net. The live stream hints that it might have been an own goal, but McHugh’s not a man to let a thing like that preventing him from claiming it!

McHugh, playing off frontman Salim Kouider-Aissa was causing all sorts of problems and looked very comfortable there.

Another ten minutes on and the game was effectively over.  Michael Doyle crossed from the right, there was a wee knock on in the middle of the box, and there was Louis Longridge at the back post to fire in.

You could see the Brechin heads drop; it has been a challenging season for them, one win and a draw in 16 games, and there was a bit of towsiness and indiscipline for a wee spell before they, to their credit, got themselves back into the game.  Wullie Muir made his first save in over 100 minutes of football from Bobby Barr as Kilday and Grant were called upon to keep them out before Queen’s once again stepped it up.

Gillespie was running the game from the centre circle, with Queen’s banging diagonal balls to Quitongo and Longridge on an almost continual basis.  In the 25th minute, Quitongo again beat his man, headed to the line, and set Gillespie up with an ace of a chance, but the big man blasted the ball over.  That really should have been the third.

He could have scored again a couple of minutes later when Salim knocked the ball down to him, but keeper Hutton was fast off his line to stop.

It was fairly relentless pressure from Queen’s.  35 minutes and Quitongo slipped past McIntosh for the umpteenth time, feeding Salim but a clutch of defenders crowded him out.

38 minutes in and Brechin’s best chance came when there seemed to be some confusion between Lee Kilday and Wullie Muir, the former leaving it to the latter, and the latter seemingly wrong-footed by it.  Thankfully for Queen’s, Muir reacted faster than the Brechin forwards could.

Bobby Barr was everywhere for Brechin as they tried to re-establish themselves again in between constant Queen’s attacks, but Queen’s let another good chance go unconverted when Darren Lyon fed McHugh, who scampered down the left and fired the ball across goal to the onrushing Quitongo who was at too much of an angle to get it on target.

Seconds later, Hutton beat away a shot from Salim and Bob McHugh managed to shoot wide.  As I’ve said, the Queen’s pressure was relentless and yet it was only 2-0 at half time.

Not surprisingly, City subbed the poor guy being tormented by Quitongo at half time and reshaped themselves by packing the midfield.  That had the effect of giving the excellent Gillespie less time on the ball, but it didn’t stop the chances.  No fewer that three in the first ten minutes of the half.  Quitongo rounded his new marker, Reekie, but his cross was blocked for a corner.  Lyon took it and as McHugh and Quitongo dived for the ball, a Brechin boot came from nowhere and cleared it.  Then it was Kouider-Aissa’s turn to come close with a shot after a clever knock-on from McHugh.

If you’re waiting for the inevitable third goal, I’m afraid it didn’t come.  Queen’s kept up the pressure, Brechin fought hard to keep a lid on it, and the inevitable raft of substitutions probably took a wee bit of edge out of the game.

Quitongo and Kilday both took knocks, Kilday’s looking a bit worse, as Ross MacLean came on to torture Reekie, and Stuart Morrison came on at the back.

In the 70th minute, the chance of the game fell to Salim.  He’s not a big guy, but Barron must surely have seen him as he tried to find his keeper with a passback that fell at the QP player’s feet.  Salim lingered on it a bit too long and Barron raced in to bundle the ball past for a corner.  Over the ball came again and Salim’s header was well touched over the bar by Hutton.

Drama in the 75th minute when Barr, Brechin’s best player by a country mile, clashed with Lyon going for a high ball.  To be honest, I didn’t see a lot in it, although Darren Lyon did receive an elbow to the head, and the referee showed a red.

Longridge and MacLean fed each other with good chances, but both were cleared; Baynham had the assorted scribes and backroom staff on their feet with an acrobatic effort and Brody Paterson nutmegged an opponent as he pushed forward to take advantage of the extra man, but that was it.

It really should have been quite a few more than two, but it was three points and another clean sheet from what could have been a banana skin of a game.  Results elsewhere largely went in Queen’s Park’s favour, so the gap to second is now seven points.

Best for Queen’s?  Gillespie and Quitongo were outstanding in the first half; McHugh put in a power of work and Longridge provided some excellent entertainment.  All in all though, a good shift from everyone, with the defence looking solid, which is pretty much what we can report every week.  Is that eight shut outs for Wullie Muir so far?