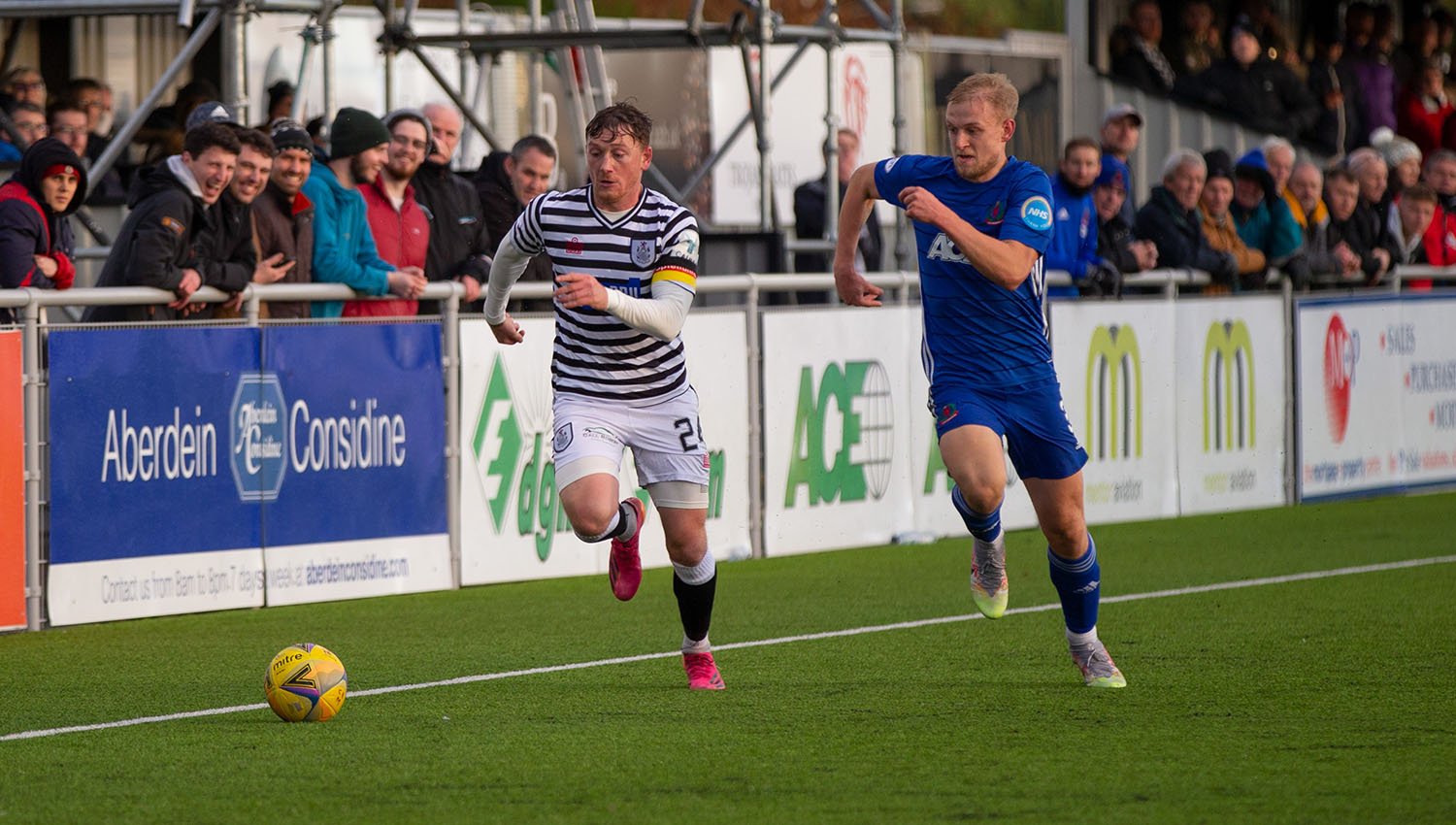 Caretaker manager Marijn Beuker named an unchanged side that won last time out to Dumbarton, as Queen’s geared up for a tough match at The Balmoral Stadium.

The first half chance of the game came the way of the Spiders in the 8th minute. Great initial play by Robson as he drove down the left flank beating three Cove players, before being upended. The resulting free kick however got caught in the blustery conditions and it came to nothing.

With 10 minutes gone it was now Cove’s chance to threaten. Ian Vigurs retrieved the ball down the right-hand side before chopping back on to his favoured left peg and delivered a cross right on the money for Leighton McIntosh who nipped in front of the Queens defence, but it went agonisingly past Calum Ferrie’s right hand post.

Just a minute later saw great play by Connor Smith down the left-hand side as he chased down a long ball, before checking back onto his stronger side before firing in a teasing delivery. In the end it’s defended well by Harry Milne. The resulting two corners were defended well, and the chance was gone.

First booking of the game went to Jack Thomson on the 18th minute who was fractionally late in a tackle on Mitch Megginson 20 yards from the Queen’s goal. It was a dangerous place to give away a free kick, however Vigurs sees his effort fly past Ferrie’s right hand post.

Just 5 minutes later sees the closest to an opening goal courtesy of Milne as Luis Longstaff’s lay off is slack and Milne nipped in ahead of him and unleashed a venomous effort which just flashed over the bar.

Queen’s pick up their second booking of the game on the 24th minute and this time it’s match winner last time out Luis Longstaff. He drags Milne back and sees the yellow card.

Longstaff goes from hero to zero as he receives his marching orders and is sent off on the 34th minute. It’s a second bookable offence after another foul on Milne.

Half time and it’s a stalemate. Queen’s Park will be the happier of the two sides but will need a similar performance the last time they came to the Balmoral Stadium, when they fought out a 3-3 draw with 10 men, to take anything from this game.

Double change for the Spiders at half time saw Jack Thomson and Louis Longridge make way for Jake Davidson and Connor McBride.

The shape changed as boss Marijn Beuker freshened things up and went with two up top to offer that extra threat on the counter attack. He also brought on an extra defender to shore up the back to try and give his side the best chance of a result.

First chance of the second half came on the 51st minute courtesy of Morgyn Neill who headed high over the bar from close range after a delicious ball in from Vigurs.

With just under half an hour to play the home side dip to their bench as Rory McAllister came on to replace Leighton McIntosh to add that extra fire power needed to try and claim all 3 points.

With just over 25 minutes to play Fraser Fyvie picked up a booking. He caught substitute McBride after misjudging a bouncing ball and stopping a dangerous counter attack.

Queen’s best chance of the game fell to sub Connor McBride after 78 minutes.  Liam Brown picked out substitute Jai Quitongo down the right who fired the ball across to McBride, but he saw his effort superbly blocked.

The home side came close to breaking the deadlock when Lewis Milne drove forward and delivered an inviting ball into goal scorer supreme Rory McAllister, but his flicked effort went over the bar – a big let off for Queen’s as it remained 0-0.

Queen’s Park played with 10 men for over 60 minutes and held out for a draw. It showed fantastic character and team spirit, with the goal keeping of Calum Ferrie assured throughout.

That’s now 6 games unbeaten for Queen’s and they will be hoping to go back to winning ways next match day, when they have an away trip next Saturday to East Fife.