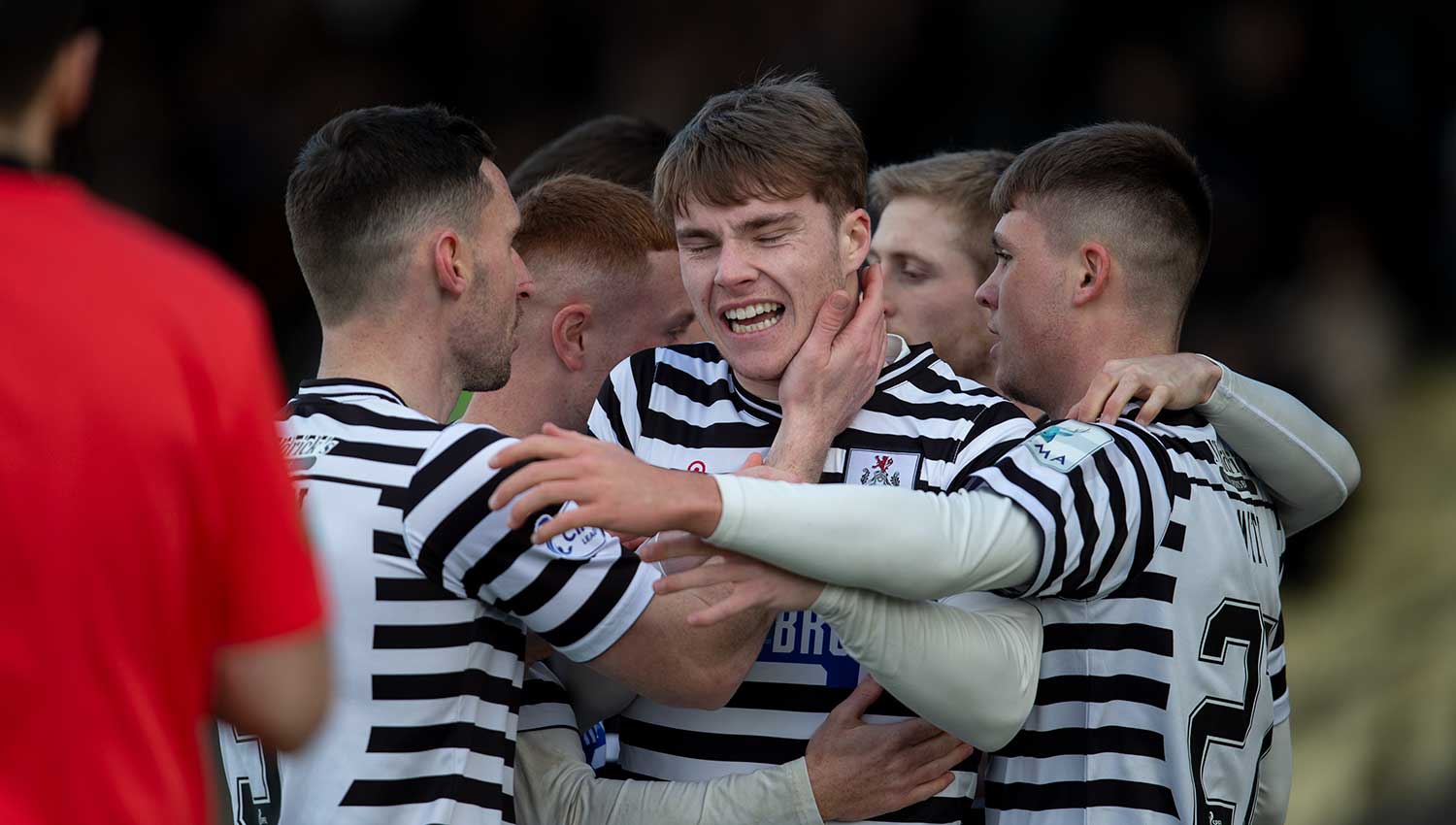 Queen’s Park made it back-to-back wins under interim Head Coach Marijn Beuker and strengthened hopes for a play-off place with a convincing 3-0 win at the moreroom.com stadium.

Interim Head Coach Beuker made one change from a side that won last time out to Peterhead, in came Jake Davidson to replace the injured Charlie Fox. Fox picked up a head knock in the win against Peterhead last time out and missed out as the club followed UEFA head injury protocols. Two academy players, Liam McLeish and Archie Graham made the bench in what is another plus for the club as they look to promote from within and keep the conveyor belt going for academy players.

A mere 2 minutes into the game and the Spiders nearly took an early lead courtesy of Bob McHugh. It’s a searching ball from Peter Grant who floated a ball over the top of the Sons defence and McHugh tussled with Bronsky in the air before swivelling and producing a half volley chip, but Wright closed down the angle and smothered the ball.

The breakthrough came only a matter of 2 minutes later as Luca Connell gave Queen’s Park a deserved lead. Connor Smith collected the ball outside the centre of the “D” before he delayed and played an inch perfect pass into the path of the onrushing Connell who fired a low effort underneath Wright’s legs. Terrific start for the Spiders.

On the 13th minute, Dumbarton had their first half chance of the game courtesy of Joe McKee who had a deflected effort on goal which Calum Ferrie cleanly gathered. It was a tremendous last-ditch challenge from Peter Grant to deflect the shot and deny a clear goalscoring opportunity.

Queen’s nearly doubled their lead on the 24th minute, McHugh used his body well and drew a foul from Buchanan about 25 yards from goal on the right-hand side. Perfect spot for a left footer and goal scorer Connell was in a confident mood. He unleashed a low rasping effort underneath the wall, however Wright was equal to it with a terrific save.

A quick turnover for the home side on the 31st minute saw the ball break for Pignatiello who fizzed a dangerous ball across the face of goal and it needed a last-ditch clearance from Jake Davidson to prevent a goal. The resulting long throw saw a bouncing ball in the box drop for McKee about six yards out, but he showed a lack of composure in his finish, as he spun and volleyed well over bar.

Only 60 seconds later saw Davidson rise highest at the other end from a Luca Connell corner but his glancing effort flashed just over.

The Spiders doubled their lead on the 35th minute in what was a dominant first half performance and it’s that man again Luca Connell. Connell played a one two with McHugh and tried to guide his effort into the bottom left-hand corner from the right-hand side of the box but saw his effort parried out. Fortunately, it came straight back to him and Luca made no mistake this time as he rocketed it into the top corner. 2-0 to the visitors with a smart finish from Connell.

Half time and it’s 2-0 to the Spiders. An emphatic first half performance sees the visitors look to win their 4th consecutive game against the Sons. A similar performance is required in the second half, but you’d imagine a reaction from the home side as they created next to nothing in terms of clear-cut chances.

Nearly an awful start to the second half as there are two free Dumbarton players at the back post from a Pignatiello cross, but McKee fails to capitalise. All Queen’s hard work was nearly undone in a matter of seconds as the floated ball dropped to McKee who takes a touch but it’s slightly heavy and his effort is stretched with no power behind it and in the end a comfortable save for Ferrie. A big let off for the Spiders.

Just shy of the hour mark saw Dumbarton dip to their bench in the hope to add that spark needed to get back into the game. Adam Hutchinson made way for the oncoming substitute Callum Wilson.

With 25 minutes left to play man of the hour Connell, who turned his marker in the middle of the park with ease and played a delicate reverse ball into the path of McHugh and Smith but eventually Smith’s effort is tremendously blocked by Stephen Bronsky.

Callum Ferrie is the first in the book today on the 69th minute as he’s cautioned for time wasting at a goal kick.

Luca Connell will not complete his hattrick today as he’s replaced on the 74th minute by Luis Longstaff.

With 15 minutes to go a searching ball down the right-hand side finds Smith who shows a terrific turn of pace but also a lot of quality as he picks out the unmarked Louis Longridge who volleys home. 3-0 and cruising for the Spiders. Another assist today for Connor Smith who has been a threat all game.

Double substitution for the Spiders on the 78th minute saw Connor Smith and Bob McHugh make way for Jai Quitongo and Ronan Darcy.

Another double substitution from Queen’s Park about five minutes later, as they make full use of their substitutes bench and give key players a rest in the process. Off came Liam Brown and captain Michael Doyle and they were replaced by Darren Lyon and Max Gillies.

That’s now back-to-back wins in the league for the first time this season and a convincing one at that. They’ll be hoping for more of the same next time out as we welcome Alloa Athletic to Firhill next Saturday.