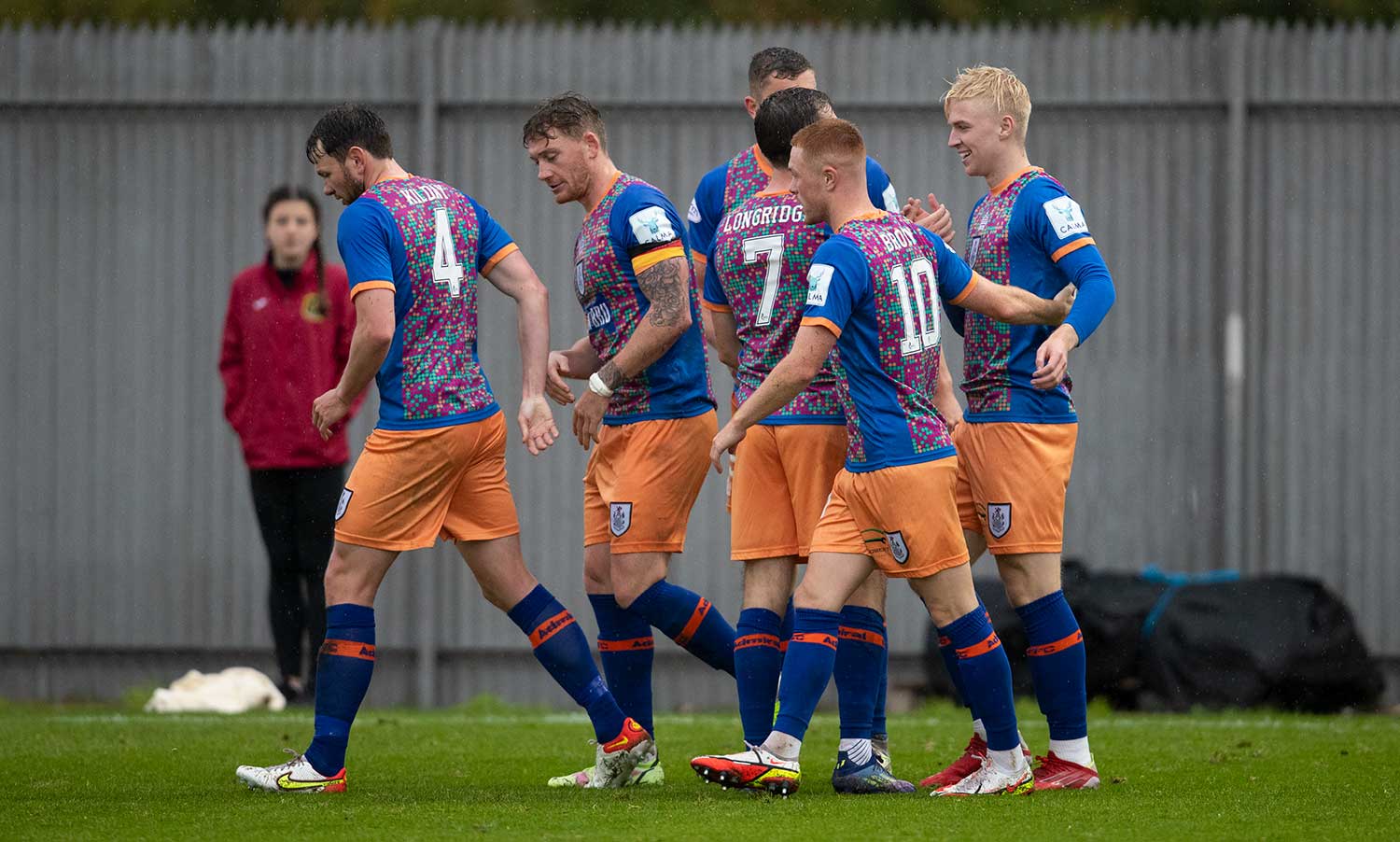 Dumbarton were still a bit shell-shocked after their 5-0 scudding at Peterhead in their last League match and Queen’s, still top of the division after their 1-1 draw at Firhill with Montrose, were confident about this clash at the Moreroom.com Stadium. Certainly, the game earlier in the season at Firhill, a 3-0 win for Queen’s, was the most comfortable of the season, but the Sons went on a great run after that, and despite that trouncing in the Blue Toon typhoon two weeks ago, they were bound to be a challenge.

As in that game at Firhill, the Sons looked impressive in the early stages but, fear not, once Queen’s got motoring, this was always going to be a win for your favourites.

Sandwiched as I was in the press box by two lads whose idea of reporting didn’t mean scribbling a mix of legible and illegible ramblings as I do, not for the first time I wondered at modern technology whilst not understanding it. One repeatedly tapped the face of his ‘phone in what looked a random manner, but obviously wasn’t, whilst the other dictated a monotone, referring to each team as “yellow” or “blue”, the players by their numbers and talked about “zone 34”, “zone 55” etc etc.

Back in the Old World, the printed team sheets showed a few changes for Queen’s from the last game at Kilmarnock; Wullie Muir came back between the sticks; in came Liam Brown and Connor Smith, whilst Calum Ferrie, Lewis Moore and Luis Longstaff dropped to the bench. It was pleasing to see Jake Davidson join them after his recent injury layoff. Luca Connell, with a bit of a niggle, was rested as a precautionary measure.

The Sons looked good from the off, playing a pressing game and it took Queen’s a few minutes to establish themselves. Charlie Fox had to be sharp to block McKee and then took a sore one from Ross MacLean in a clash but still managed to emerge with the ball.

Once Queen’s got over that initial tough spell, the midfield reverted to type, keeping possession, and playing some wonderful football. Doyle and Robson were causing problems down the wing and McHugh was revelling in the good service. Despite the possession, the Sons were proving to be difficult to break down. McHugh came close with a header, keeper Ramsbottom was out to block two promising chances falling to Conner Smith, and Queen’s produced some sublime close interplay moves, but Dumbarton held out until the break with only a close thing from McGeever’s head (“yellow 2, zone 14, headed over” per the man to my left) to show for their efforts.

But once the second half got going, Queen’s weren’t slow to move up a gear. Two minutes in, Carswell pulled back Louis Longridge as he burst into the box, and it was a penalty for Queen’s. Grant Gillespie’s spot kick was well-saved by Ramsbottom but the big guy had followed up and headed in the rebound.

The game swung very visibly Queen’s Park’s way and you just knew that this was going to be our day. Longridge, here there and everywhere, was causing masses of problems and watching Liam Brown was, once again, a pleasure. He came close with three efforts in the second half alone, but it’s his lead-up play, passing and close skills that mark him out as one of the best footballers in the division.

Dumbarton had a great chance to bring the game back when Carswell was in a great position, but Grant Gillespie was there to block and Queen’s scurried up the park on the break. Lewis Moore, on for Jack Thomson, was in the clear but Ramsbottom did really well to race out and block.

Queen’s dominated but couldn’t add to their score until the 73rd minute. A free kick was knocked back to Tommy Robson near the halfway line and his pin-point, accurate diagonal cross was headed across goal by Charlie Fox and the onrushing Bob McHugh was there at the back post to whack the ball in.

You could see Dumbarton sag and it only took four minutes for Queen’s to finish them off. Out on the left, Lewis Moore touched the ball to Louis Longridge at the edge of the box. His beautifully judged flick with the outside of the foot fell perfectly into the path of Longstaff, and before the man next to me could get out “Blue 28, zone 64, shot and goal!” his deft touch sent the ball spinning under the keeper’s body and rolling into the net.

That was the scoring, but not the great football over. The midfield upped their tempo, added a wee bit of showboating, giving us a comfortable and entertaining ending to this most successful of days.

Another week in and another week at the top of the league. Not only that, three of the next four sides in the table lost, making it a particularly good day for your heroes.

It was another day when a strong performance right throughout the team did the business. Another clean sheet and another impressive display by the backline, who kept the Sons at bay. The midfield are simply a joy to watch, as enjoyable as anything I’ve seen for years, and it was encouraging that we made so many chances against a team that is proving difficult to beat this year. The goal difference improved, assisted by clubs that we might see as challengers losing by two goals or more, and there was a real confidence flowing through the team.

Good to see Bob McHugh on the scorers’ sheet and excellent that young Luis Longstaff got off the mark; we do need some support on the scoring front and three at Dumbarton is a pretty goal haul.

That win, and the other results, moved Queen’s three points clear at the top. Ten games unbeaten and no fewer than six points above fifth place; times are good.

Next up are Alloa at Fortress Firhill this coming Sunday. Not one to miss.