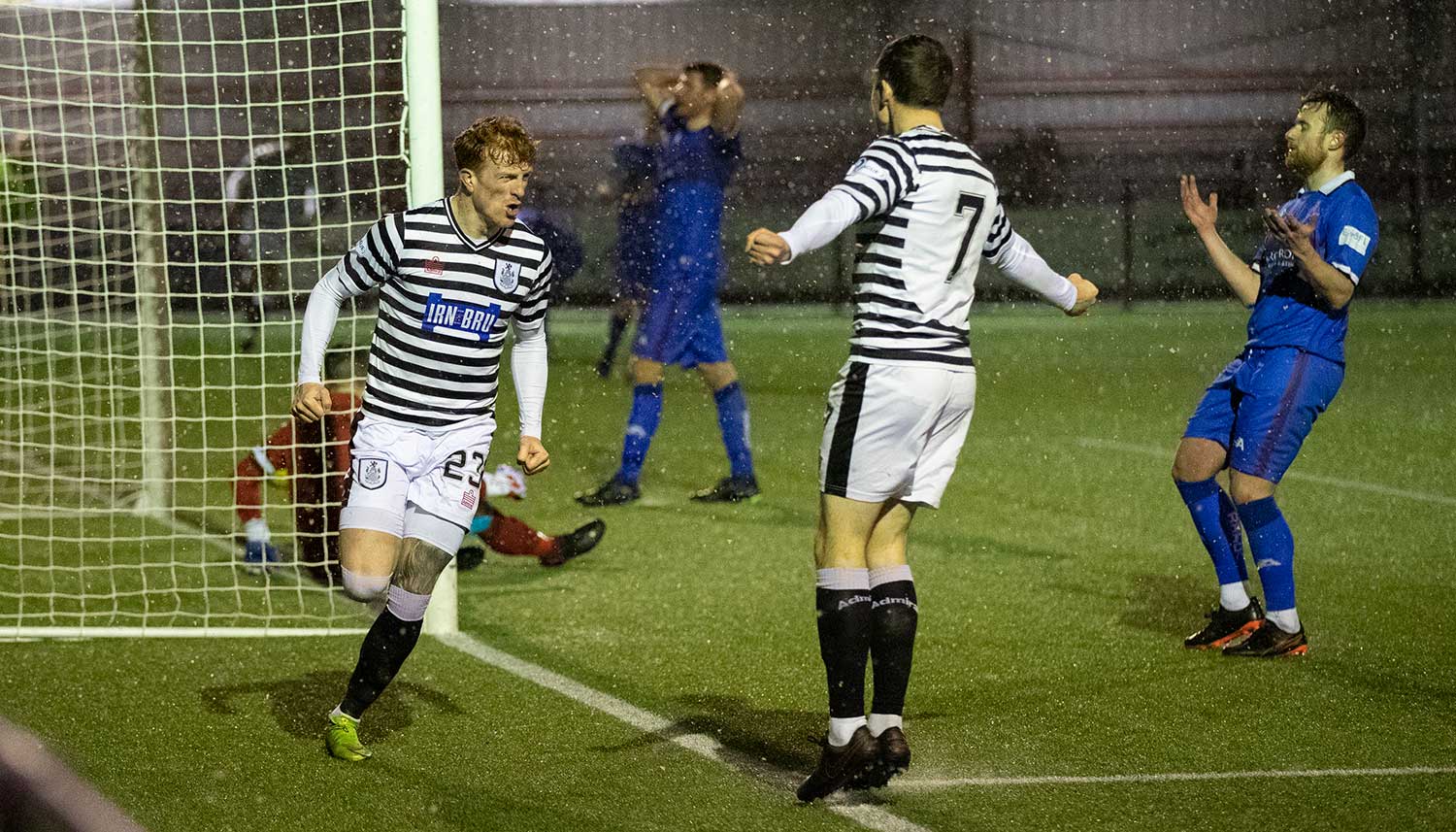 SIMON MURRAY and Louis Longridge were on target in extra-time as Queen’s Park defeated Dundonald Bluebell at New Central Park to set up a Scottish Cup second round clash with Queen of the South.

Jai Quitongo fired the League Two leaders into the lead two minutes into the second half but the East of Scotland side hit the professional outfit with a last-gasp leveller through Craig Wedderburn.

But the Spiders’ big summer signing and sub Longridge fired the all important goals in extra time as Ray McKinnon and Co avoided a major upset at the first hurdle.

The home side set up defensively and out of possession played in two banks of five as they looked to frustrate the favourites for the tie – who enjoyed large spells with the ball throughout the contest.

But Quitongo – who was a constant threat – was inches away from opening the scoring in superb fashion after just eight minutes.

Following some great link-up play with Murray the attacker dropped the shoulder to beat his man before crashing his effort off the bar.

Two minutes later Michael McGlinchey was next to try his luck from distance but his strike was straight at James Lennox in the Dundonald goal.

Lennox’s woodwork came to the rescue once again in the 16th minute as McKinnon and Co pushed for the opener.

An excellent ball into the box by Grant Gillespie was met by Murray, but his looping header hit the top of the bar before bouncing out for a goal kick.

With half an hour on the clock Lennox showed his bravery as he punched a Darren Lyon cross off the head of Will Baynham.

Dundonald continued to stand tall in their defensive shape and put in numerous blocks and clearances but they were let off by Quitongo – who should have really scored.

Excellent pace and direct running from Murray took him past the Dundonald defence and he dug out a cut-back that found an unmarked Quitongo, but he fired his effort off target from eight-yards.

Right at the end of the half Queen’s threatened once again with MacLean’s dangerous ball into the box just evading Baynham.

The Spiders started the second half like the first but this time made their early possession count with the opening goal of the match arriving just two minutes into the second period.

MacLean’s cross was met by the head of Quitongo but his effort was blocked, however the rebound landed at the feet of the attacker who smashed the ball low into Lennox’s right-hand corner to leave the Dundonald No1 with no chance.

Bluebell nearly responded in the perfect fashion through Aiden Hendry but his 30-yard rocket was just inches away from nestling in the top corner. Queen’s No1 Muir was at full stretch as he watched the ball just fly past his post.

MacLean and Baynham both had big chances to double the lead in the opening 10 minutes of the half but both put efforts wide when they really should have tested Lennox.

Dundonald continued to drop deeper and deeper as the game progressed but they carved out a chance with 20 minutes to play but Chris Gay fired high over Muir’s bar.

Quitongo twisted and turned again but dragged his effort wide of the target as he looked to double his tally for the night.

Moments later he was denied once again by the woodwork after heading against the bar from inside the six-yard box following a superb ball from MacLean. The third time in the match the woodwork came to the aid of the home side.

In the 80th minute referee Scott Lambie pointed to the spot following a challenge on Murray. The Dundonald players were adamant there was nothing in the tackle from sub James Mackie and loudly protested to the whistler – who ended up reversing his decision.

TV footage didn’t help make the call any clearer with Murray bemused by the outcome.

The Spiders continued to push for the second goal with McKinnon’s men forcing a series of late corners but as they had done throughout the match, Bluebell defended their box very well.

And they hit the Spiders with a late sucker punch in the final minute.

A wonderful ball in from Gay was nodded back across goal and big defender Wedderburn was on hand to blast the ball home from close-range to force the game into extra-time.

Much like the 90 minutes of normal time, the Spiders had the bulk of possession and chances with Quitongo going close six minutes into the first period but his effort was deflected wide.

McKinnon rang the changes with Craig Slater and Longridge introduced for McGlinchey and Quitongo for the final 20+ minutes of extra-time as they searched for the lead once more.

And it arrived in the 100th minute of the game through former Hibs and Dundee United man Murray.

A stunning ball across the face of goal from MacLean found Murray unmarked in the centre of the box and the striker was on hand to slot home from six-yards.

The striker was then guilty of missing a huge chance just minutes later. He rounded keeper Lennox before composing himself but he crashed his effort off the woodwork when he really had to score.

Five minutes into the second period of extra time sub Longridge’s header somehow found a way into the net and put the game out of sight. The midfielder was taken out in the air as he headed towards goal but the ball bobbled past Lennox and into the back of the net.

As the snow continued to fall, Slater took the ball a run before cutting inside and firing at goal. But Lennox, again, made a fine save to deny the midfielder making it four as the Spiders put themselves into round two after 120 minutes of football.

Next up it is a League Two clash with Albion Rovers this weekend before hosting Queen of the South at Hampden on January 9.

A wee bonus from last night. Alongside the full match report, there’s a feature article on how different football is in the year of the pandemic.  Click HERE to read