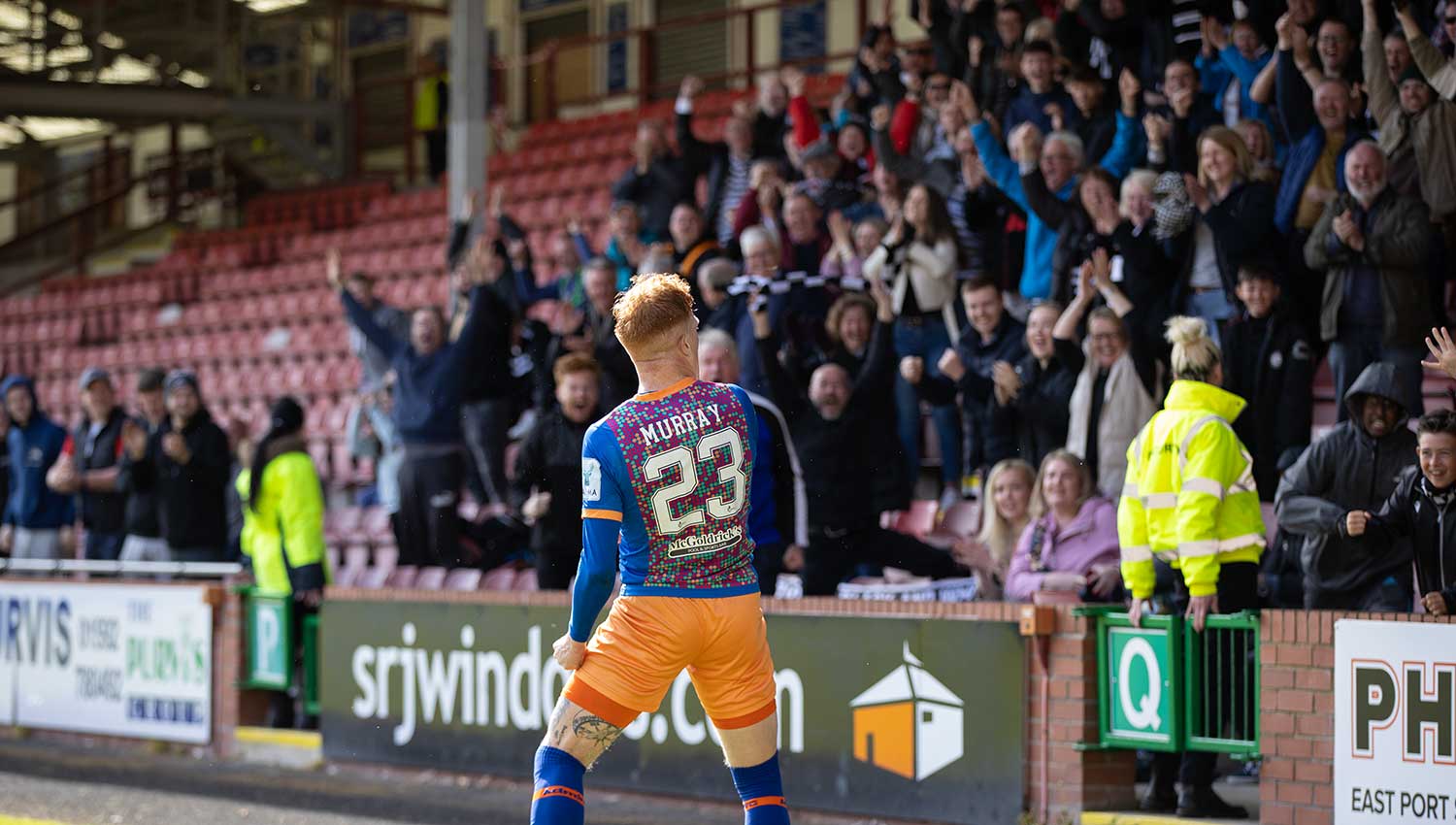 Super sub-Simon Murray scored a last-minute winner against Dunfermline at East End Park to send the Spiders into the Cinch Championship Play Off Final against Airdrie.

The Spiders made two changes to the side that drew with the Pars in the first leg on Wednesday with Louis Longridge and Darren Lyon replaced by Jai Quitongo and Luca Connell.

The first chance of the game fell to Queen’s after two minutes when a long ball was played up the park was met by Bob McHugh on the left and the striker did well to cross for Connell who went one on one with home goalkeeper Jakob Stolarczyk but his shot was saved.

Two minutes later and it was the home side’s first chance of the game after good work down the left by Martin and Ryan Dow teed up Liam Polworth just outside the box, but his low was saved by Calum Ferrie at the expense of a corner.

Dunfermline took control of the match and after 24 minutes they had a quick free kick on the right-hand side of the pitch which found Dow in the box, but his shot just went wide of the post.

Three minutes later Dow had another chance as he managed to find space in the middle of the pitch, but he this time he fired his shot over the bar.

Dunfermline continued to press and with half an hour gone they had another chance as a cross from the left was not cleared and the ball landed to Matthew Todd in the box who passed to Steven Lawless, but he fired his shot over the bar.

On 33 minutes Dunfermline had their best chance so far when a corner from Graham Dorrans managed to find its way to the back post where it was met by Efe Ambrose and his shot from six yards out was magnificently saved by Ferrie.

The last chance of the first half was six minutes later when continuous pressure from the home side led to Dorrans and Dow linking up well in the middle of the pitch with Dorrans dragging his shot wide of the post.

This was the last action of the opening half with Queen’s happy to go in without conceding whereas Dunfermline would have been frustrated that they had not scored despite their domination.

The second half got underway and again Dunfermline dominated with Queens hoping to hurt them with a counter-attack.

The Spiders introduced Simon Murray to the match in the 55th minute when he replaced Jai Quitongo and three minutes later Murray darted towards on goal where he was tripped by Ambrose.

Referee Napier blew his whistle and showed Ambrose a red card to reduce the home side to ten men.

Dunfermline started to play in a more conservative fashion as they were a man down with Queen’s trying their best to keep possession of the ball.

In the 70th minute, the home side had a free kick on the edge of the box which Lawless swung in and it was met by Coll Donaldson, but his header went inches over the bar.

The second half was a more even match and the Spiders had a great opportunity with 11 minutes left when a cross by Tommy Robson was met by Murray but he dragged his header wide of the post.

Queens had another chance in the 85th minute when a left-wing cross by Murray was headed away by the home defence into the path of Connell who sent a volley just over the bar from the edge of the box.

In last minute Queen’s won the tie when terrific work by McHugh, who refused to give up on the ball, led to him firing a low cross across goal which found Murray who blasted into the net.

An unbelievable moment for Queen’s.

There was still work to be done as Dunfermline instantly went up the pitch trying to find a way back into the tie, but Queen’s Park managed to hold on and claim an incredible win and send their fans home delighted.

Queen’s Park next match will be the first leg of the Play Off Final at home to Airdrie on Thursday.