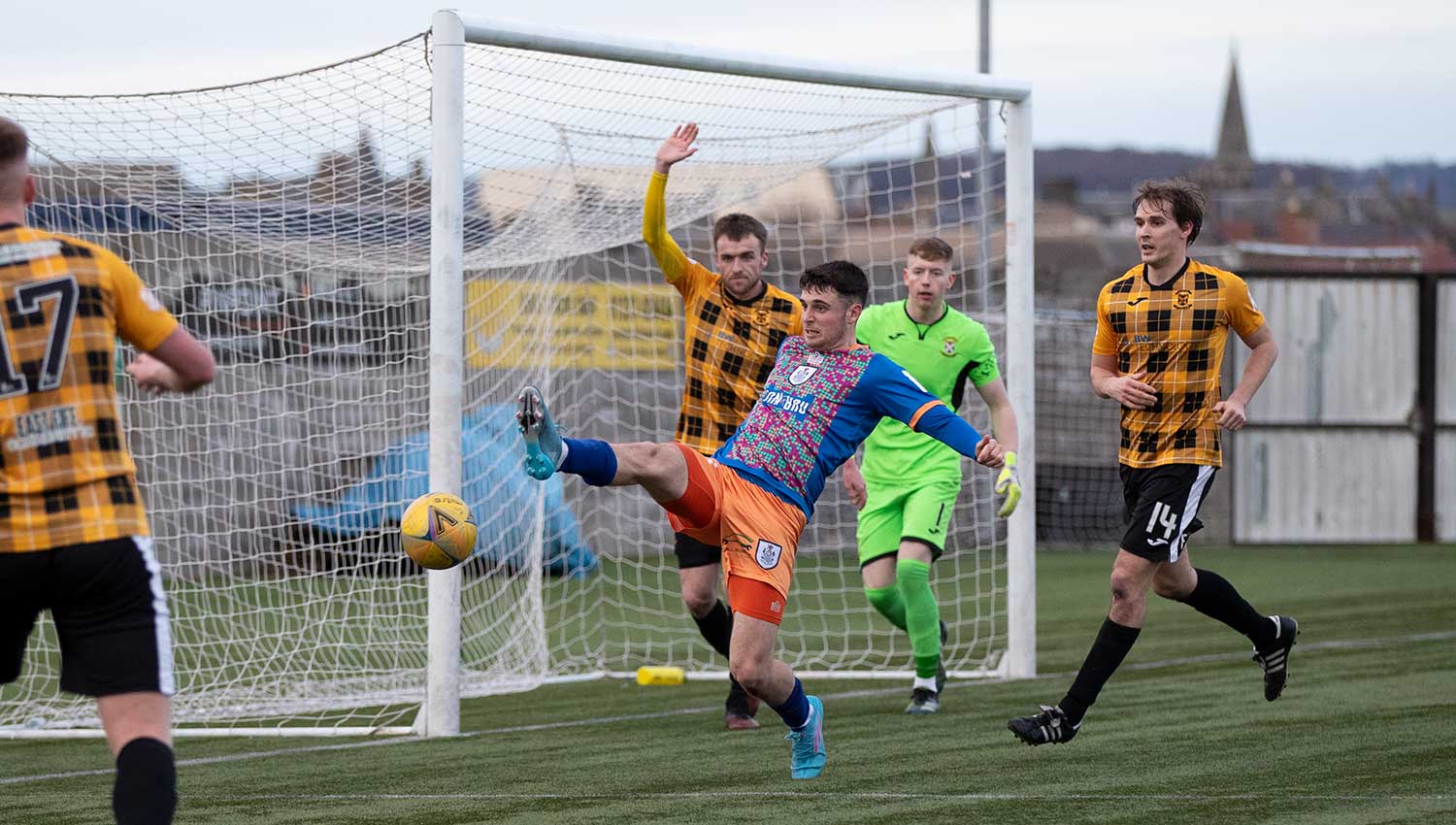 Queen’s Park shared the points yet again, this time following a 1-1 draw with East Fife.

Queen’s made two changes to the side that drew with Cove Rangers last Saturday. Connor McBride and Ronan Darcy replaced Luis Longstaff and Bob McHugh. Darcy was making his first start for the Spiders after arriving on loan from Bolton in January.

East Fife manager Stevie Crawford made one change to his side that defeated Alloa Athletic last Saturday with Ryan Wallace coming out of the team to be replaced by Danny Denholm.

The Spiders got off to a nightmare start when they went a goal down in the 5th minute. A pass back to Queen’s keeper Calum Ferrie looked safe enough, however his intended pass to a defensive colleague was miss hit and it ended up in the Queen’s net for one of the most bizarre own goals seen for many years.

The start shocked the away side and in the 8th minute they could have been two goals down after losing the ball in their own half, Kyle Connell picked up the ball and unleashed a shot from 25 yards that was brilliantly tipped over the bar by Ferrie.

The home side were pushing for the second as they could sense vulnerability among the away side and in the 10th minute, they had another chance after a corner led to Higgins getting a touch at the front post, but his shot hit the post.

Queen’s Park started to settle down and make some passes and, in the 20th minute, got back into the game with a stunning equaliser. A Liam Brown free kick into the box was cleared by the home side but the ball fell to Brown again and he unleashed a venomous shot from 20 yards which slammed into the back of the net.

The Spiders took confidence from the goal and two minutes later nearly took the lead after switching the play from left to right led to the ball finding Michael Doyle in the opposition box and his cutback resulted in Darcy having a shot which was just about dealt with by the keeper.

The home side won a free kick just outside the box in the 27th minute, however the resulting attempt on goal was comfortably saved by Ferrie.

The match was really open and both teams were very competitive. In the 29th minute there was another chance, this time to Queen’s when good work down the right led to Jack Thomson switching it onto his left foot and his shot was bending but it went narrowly past the post.

As half time approached, Queen’s were awarded a penalty in the 42nd minute. Defender Charlie Fox forced his way into the opposition box, was brought down, and the referee awarded a penalty. The resulting spot kick by Louis Longridge saw the keeper guess the right way and saved low down to his left-hand side.

This was the last chance of the half – would Queen’s regret not converting that penalty kick?

The start of the second half and the Spiders were enjoying a lengthy spell of possession without threatening the home goal too much. Both sides were struggling to create chances as the game lost its spark compared to the 1st half. The first half chance of the second period fell to the Spiders in the 67th minute after a counter attack from the away side resulted in the ball out on the left to Connor Smith but his shot went wide of the post.

The second half consisted mainly of Queen’s Park trying to break down East Fife’s solid defence and, in the 75th minute, the away side had the best chance of the second half when Longridge managed to find his way into the box and his low shot hit the post and the home side managed to scramble the ball clear.

Throughout the second half, Queen’s Park had most of the ball but struggled to create too many clear opportunities or force home keeper Smith into action. To cap a frustrating day for the Spiders, a red card was shown to Queen’s Director of Football Marijn Beuker as the players left the field at the end of the game.

The Spiders next match is at home to Montrose next Saturday.