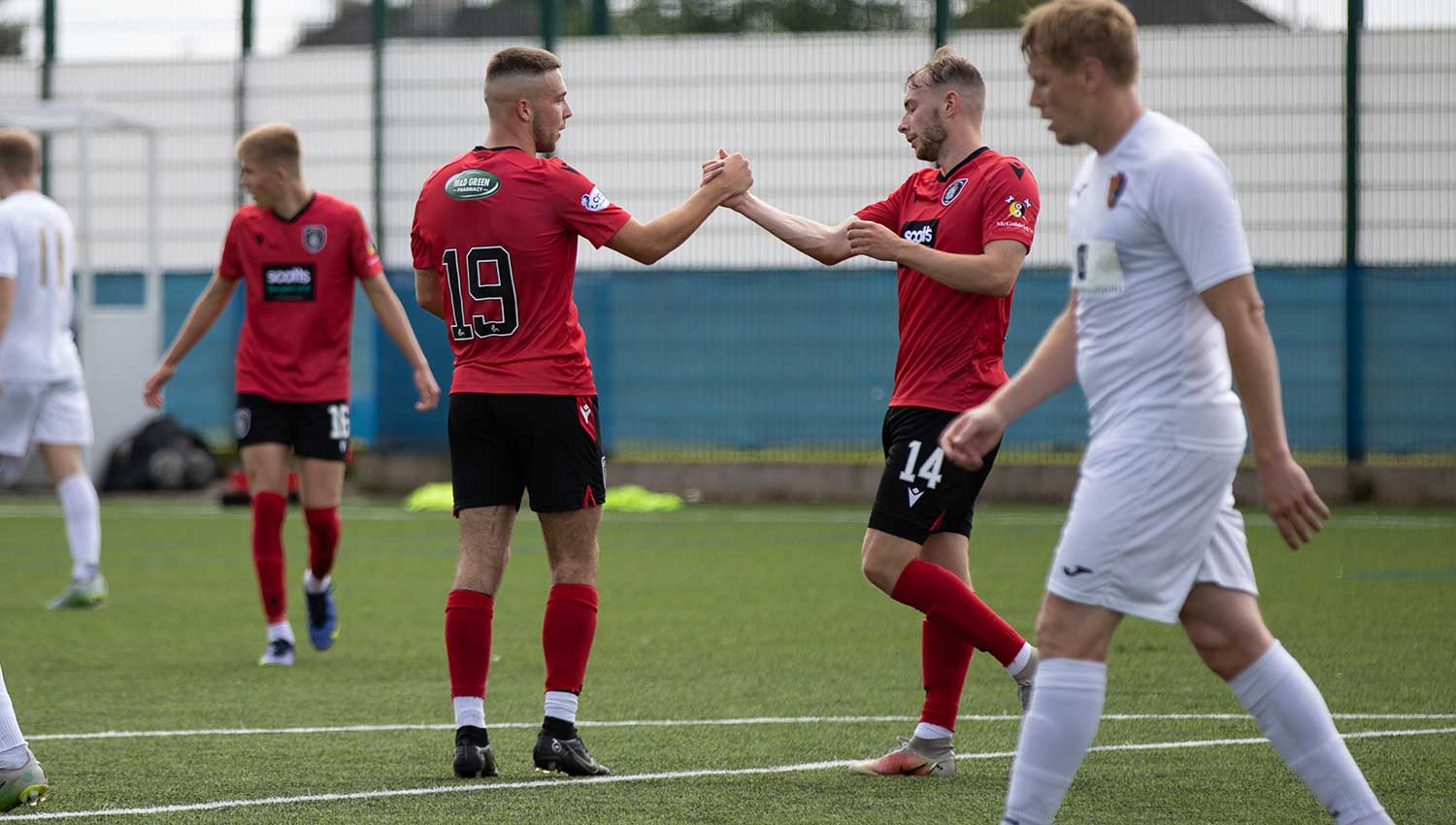 The opening period saw both teams pushing for control with neither team having any real scoring opportunities.

In the 12th minute Patrick Jarrett intercepted a pass out from the East Kilbride defence, then drove forward and played the ball wide to Cammy Bruce who cut the ball back for the trialist only for his shot to be blocked.

A minute later Queen’s were awarded a penalty when an East Kilbride defender handled the ball inside the box. Scott Williamson stepped up to take the penalty only to see East Kilbride keeper King save low to his left.

After the miss Queen’s stepped up their game and put East Kilbride under pressure.

This pressure nearly paid off when Scott Williamson forced his way past two defenders, fired off a shot only to see the King deny him once again.

In the 18th minute Queen’s opened the scoring. Gregor Nicol, after good work down the left wing, cut the ball back to Patrick Jarrett, 25 yards out.  Partick played a one-two with the trialist and smashed the ball low into the corner of the net from 20 yards out.

The minutes later Queen’s added a second. A corner from the right was played long to the far side to Alex Bannan.  Alex returned the ball into the East Kilbride six yard box for Jason Naismith to head home.

Jack Heraghty had to look smart in the 33rd minute to push a low shot away for a corner.

Three minutes later Jacques, again, pulled off a superb save, this time diving high to his left to push the ball away from danger.

In the 38th minute Scott Williamson made it 3-0 to Queen’s.  Cammy Bruce played in Lewis Moore, who in turn played a through ball to Scott Williamson.  Scott turned two defenders before firing a superb shot past the keeper into far corner of the net.

In the 50th minute East Kilbride pulled one back.  Fram a corner on the right East Kilbride’s Page fired in a shot which was deflected off a Queen’s defender into the corner of the net.

Four minutes later Scott Williamson had the ball in the net only to be chalked off for offside.

In the 58th minute a superb strike by East Kilbride’s Neil McLaughlin, low to Jacques Heraghty’s left pulled a second goal back for the Lowland League side. 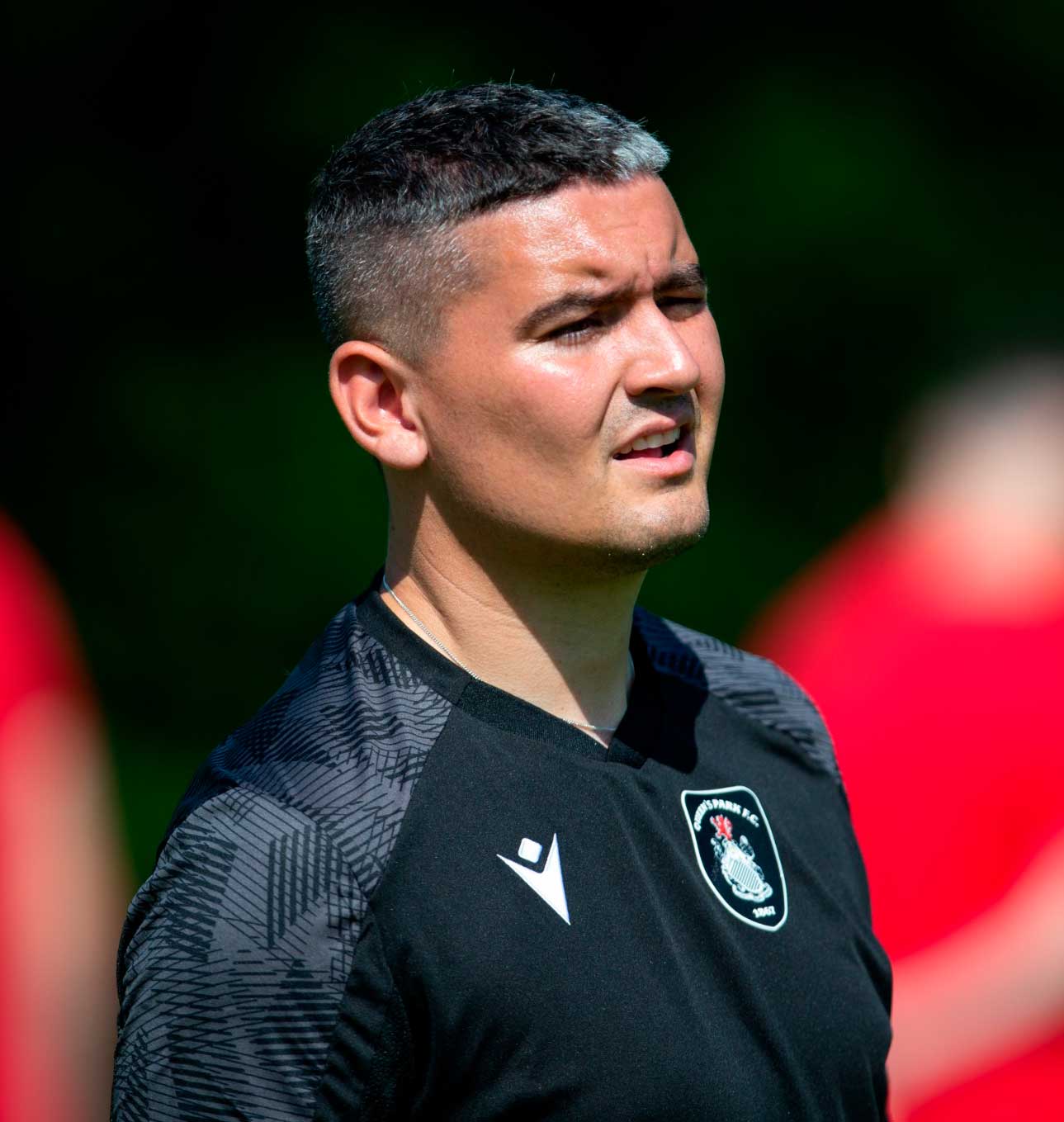 I thought we put in a strong performance especially in the first half. I was pleased with a number of aspects of today's game especially the transitions between defence and attack. Some of the football we played was very pleasing. We were under pressure for a fair bit of time in the second half, however it was good to see how we fought our way back into the game during the last phase of the game.

We made a number of changes in the second period. Today was about getting the boys game time. Some of them have played for our 18s recently, so these boys came on later in the game.  The boys who came on earlier needed to get some minutes under their belts.

We've got a lot of young players in our squad who certainly have ability, and will develop in terms of  game management and leadership. Jason Naismith gave that leadership in the first half.  A good learning experience for the boys  around him. It's about developing a consistency in leadership and decision making and executing under pressure.

Although we felt a bit unfulfilled in the second half, we have to remember that for many of our players that's their first action of the pre-season and they were against a very good Lowland League side.

We have a lot still to work on both individually and collectively but it's early days.