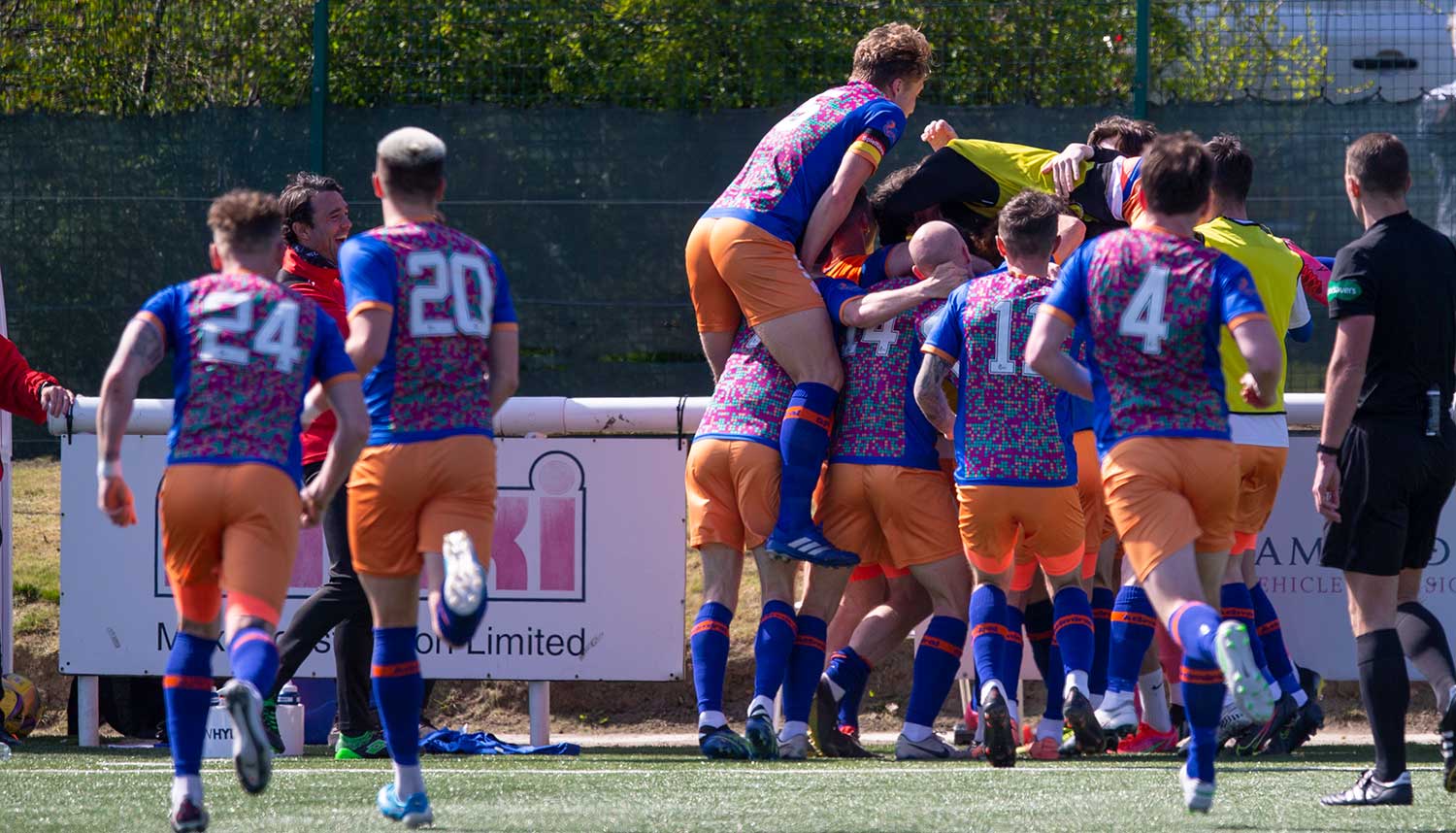 Ahead and cruising (the BBC website gave us a 62/38 split of the play at half time, which is Barca-esque), but we were missing chances.  Again.  We’ve been here before but have just toughed it out.  Too often.  So, when the impenetrable ring of steel round Wullie Muir’s goal was breached twice by a team that has proved how effective it is, you could be forgiven for grumbling.

O ye of little faith!  We all knew it would turn out ok, didn’t we?

We had another refreshed line up as the Boss rang the changes.  As well as replacing the unfortunate Jai Quitongo, whose injury incident on Tuesday looked and sounded grim, Ray brought in four who hadn’t started against Annan.  Peter Grant was back at the heart of the defence, and Brody Paterson replaced Tommy Robson at left back.  Darren Lyon and Grant Gillespie joined midfield, with Bob McHugh recalled to play just in behind striker Simon Murray.

And it started off so well.  That man Longridge, notionally on the left, was everywhere.  Anywhere the ball was, he was there or thereabouts.  Only three minutes in, and we had created a chance.  Murray, McHugh and Longridge threaded the ball across the face of goal with the last-named jooking in past his man and belting his shot just over the bar.

Four minutes later, Queen’s scorned a great chance.  A perfect Connell corner was met by Grant, whose header was blocked, and then Gillespie had his effort blocked too.  As so often happens in these situations, City broke up the park and only a great tackle from Paterson saved the day with Handling heading into the box.

But the play centred up the other end in the main.  Another slick move involving Gillespie and Murray set McHugh up, but his effort was blocked.  Another nice move initiated by Murray had him cut past McIntyre and set McHugh up again, but his shot went just wide.  My notes are a repeat of this again and again, with the names being shuffled about a bit, and the BBC stats don’t lie; we were so much in control, it was hard to believe that City had won six and drawn one of their last seven league matches.  But they did have Ouzy See playing up front and it took both Kilday and Grant to keep him in check.  Thankfully for Queen’s, the rest of the City team didn’t support him and his really good work was generally wasted.

25 minutes in and all the pressure from Queen’s hadn’t produced a goal.  This might have been City’s ploy – tire us out – but eventually the deserved goal came.  City keeper Antell had looked a bit harassed as he punched a ball clear and his teammates were becoming a touch boisterous.  From one of the many fouls, it was that man Luca Connell who whacked a diagonal ball across the park to the back of the box, where Peter Grant met it beautifully to put Queen’s one up.

That should have been followed by another, but the chances went a-begging.  Longridge and Paterson worked well down the left, with the latter firing over a great cross for Darren Lyon; he got his shot in, but it wasn’t strong enough to evade a last gasp challenge.  Doyle then crossed for Murray; header over.

Connell, McHugh (twice) and Longridge all had decent chances that came to nothing, whilst both Grant and Kilday had to be sharp to deny Campbell and See at the other end.

City changed formation in the second half and certainly moved up a gear.  That said, we could have had another goal just after the break when Simon Murray showed a great bit of close skill and won a corner.  Connell varied his usual delivery with a daisy cutter for Gillespie, but it was inches from the galloping Gillespie’s outstretched foot.

Best chance of the game came in the 50th minute.  Antell and his defence faffed about, failing to clear, and Murray picked up the mistake, rounded the keeper and somehow couldn’t get the ball into the net before Henderson raced in to block.  That really should have been 2-0.  Kilday then came close, hitting the post from yet another corner before disaster struck in the 54th minute.

City had been dangerous at set pieces all afternoon and, following a corner, the inevitable happened and Henderson shot in when loosely marked.  This was City’s first attempt on target.  It was quickly followed by what looked like an easy shot from McIntyre to deal with being fumbled wide by Muir.

We had a quick chance to regain the lead when McHugh beat McIntyre, fed Gillespie, but his shot was blocked as he took a bit too much time.

We seemed to lose our composure for a while and we lost another goal in the 63rd minute.  Gillespie and Thomson tussled for the ball and it looked like a foul on the Queen’s man, but the referee gave it the other way.  In came Thomson’s resultant free kick and Campbell was given bags of time to head in.

The full-of-praise Match Report A disappeared in a flurry of torn pieces of paper, and I started on Match Report B in red biro.  And in angry BLOCK CAPITALS!  I can let this slip as (spoiler alert) we won, and eventually won in style, but all these missed chances recently have tempted fate maybe once too often.  Was this the day that we’d lose and rue the chances we should have converted?  No, missus, it wasn’t.

Prompted by the excellent Gillespie, the team rallied and started to dominate again after some quite heated exchanges to clear the air.  A change in direction then came with the introduction of Baynham and MacLean for Lyon and McHugh, and you would have to say that it was inspired.  Baynham can be a real handful and he was certainly on song, giving Murray some much-need additional support.

City made mistakes at the back as we pushed them hard and the equaliser eventually came along in the 78thminute.  A well-worked move between Connell and Doyle ended with Doyle’s cross planting itself on Murray’s head, and the big man didn’t miss

The QP tails were up now and, despite a couple of instances where Queen’s players slipped on the surface and caused a bit of a stir amongst their team mates, there was an atmosphere of confidence.  Well-founded, as it happened, and the winning goal was a peach.  Baynham, a man most certainly fired up, took on a great ball from Doyle, beat his man and put over a wondrous cross that Murray met perfectly to slot in.  Off came the shirt and on came the celebrating subs and his team mates to mob him!  Murray was booked for his celebration, which might cost us his services later, but you couldn’t blame him for his daftness.

As I tried to gather together the thousand pieces of Match Report A again, City pressed us hard but Kilday, then Muir, did well to thwart two potentially dangerous situations.  Thankfully, there wasn’t the usual ten minutes of extra time so prevalent these days, and we clocked up yet another win in what was the hardest match of the season so far.

City are a decent outfit and have some outstanding players for this level in See and Thomson, and we were spared the intervention of De Vita, but this was a very strong display from Queen’s.  I have to mention the missed chances and, to be fair, Simon Murray mentioned them too in his post-match interview, but he also talked about the spirit in the side and the strength to come back from being a goal down late on, and he is spot on.  Lesser teams would have crumbled, but we didn’t.

He was a colossus up front, but my top man would be Grant Gillespie, who controlled the midfield superbly and pulled the whole thing together.  Longridge had another excellent match, as did Brody Paterson, with whom he has established a fine working partnership.

That win leaves us one point short of winning the Division with five games to go.  Whoda thunk we’d be in this elevated position when the membership voted to change our amateur status a short while back?  Not me.  I’m enjoying (just about) every single minute of it.  Buckle up for Tuesday’s visit of Elgin City to Fortress Falkirk, kick off 7.45pm.  The white knuckle ride is reaching the summit; hang on!