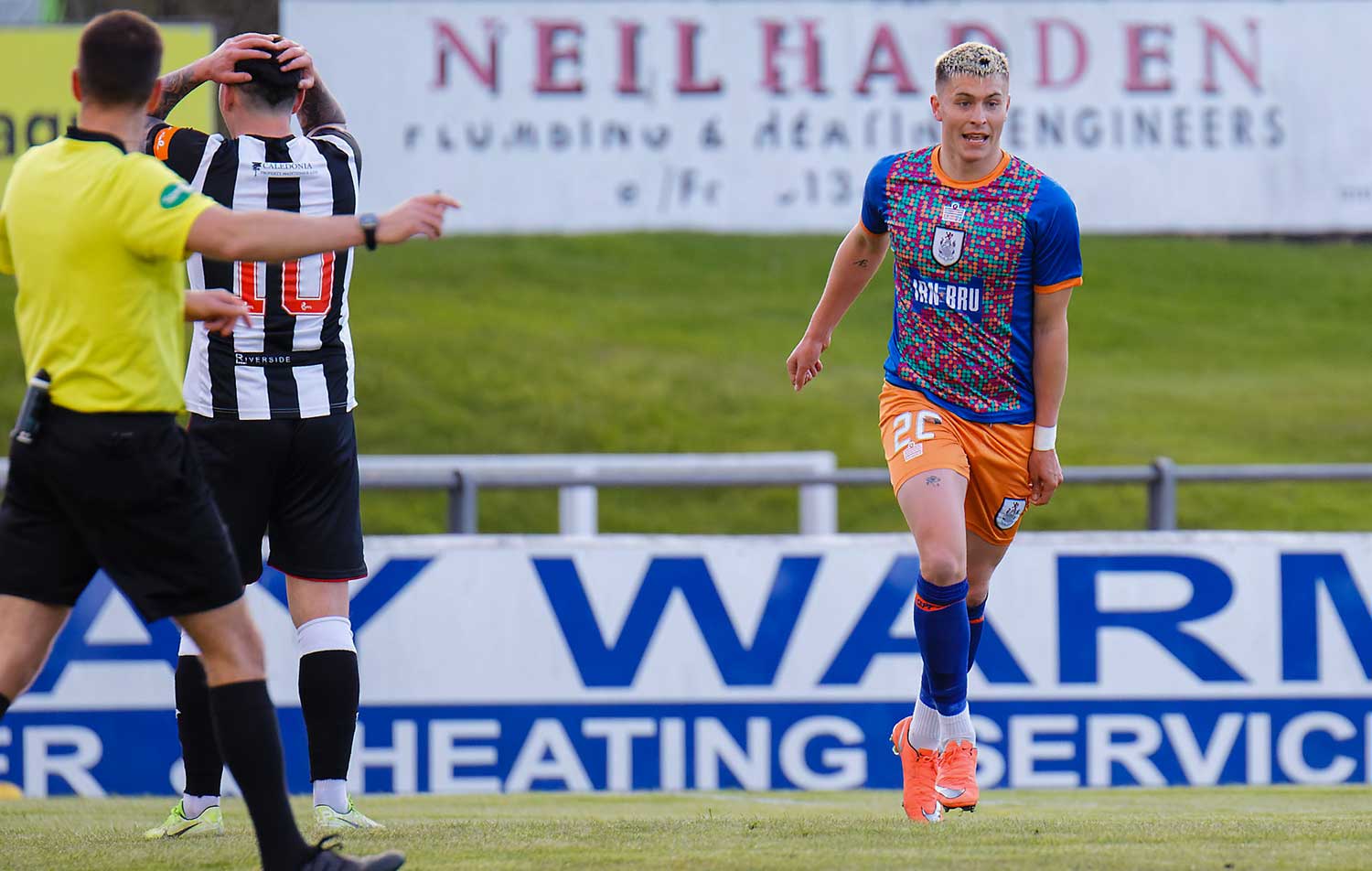 Last game of the season for your championship winners and, as they say, only pride to play for, but it was a huge game for Elgin for whom defeat would probably have consigned them to another season in League 2.

But when you have a guy like Kane Hester upfront who, although he looks like he could go a big fish supper to bulk him up a bit, is a goal machine and he can make the magic happen.  He had four chances in the game and (spoiler alert) he scored three of them.

On a very bumpy pitch, Queen’s made no fewer than six changes to the side that saw off Edinburgh City last week.  The defence stayed pretty much as it was, with the replacement of Robson by Paterson the only change, whilst the midfield four of MacLean, Lyon, Gillespie and Galt coming in en masse.  Salim Kouider-Aissa replaced Will Baynham to partner Bob McHugh up front.

City were right up for this one from the off and were pressing Queen’s hard with a very high back line.  If their objective was to force mistakes, then that ploy came off pretty well, If there’s one thing you can give Queen’s a lot of credit for this year, it’s not making mistakes, Grant Gillespie, steady and sure, seems to glide through the game, poking and prodding, seldom losing the ball.  But even he fell foul to Elgin’s pressing game, losing the ball to the excellent Sopel in the third minute although his cross, like so many at either end for the full 90, couldn’t find a man on the end of it.

Hester showed very quickly that it was going to be his night, giving Morrison a hard time and the big guy had to be at his best to dispossess both Hester and then Sopel in the one move with an excellent show of defensive skills.

The half meandered on with Kouider-Aissa having to back track to find the ball, particularly as McHardy was all over him whenever he got onto the end of anything from either the busy MacLean or McHugh.  It was the latter who was making the opportunities for Queen’s cutting in and out as he tried to get something out of the City backline.

Queen’s had a couple of chances around the 25-minute mark with McHugh pulling a save out of City keeper McHale, and then the keeper making a bit of a hash of collecting a great cross from Doyle before recovering.

Queen’s seemed to have weathered the early storm and were a bit more composed, with Doyle challenging down the right and Gillespie handling it all well in the middle.

But goalless it was a half time; the calm before the storm.  Queen’s made four changes at half time, apparently the first time we’ve made so many changes at one fell swoop, but it was City who took the advantage just four minutes into the second half.  Carroll fired a long ball across the midfield only for Sopel in the middle and he pushed the ball to Hester who made it one-nil.

It didn’t take long for the second.  Again, we looked sloppy in the middle, allowing Sopel to break and feed Cameron on the left.  His shot came off the bar and fell at the feet of Hester.  I could have run down from the stand and scored that one and he didn’t make a meal of it.

Two nil and, frankly, struggling, but we are nothing if not resilient, four minutes later, a great cross from Robson evaded the flailing hands of McHale and Will Baynham was there to nod it in.  1-2 and back in the game.

The game ebbed back and forth with both sides making mistakes.  Lee Kilday’s poor clearance was intercepted by Cameron who fed Hester, but his shot went wide.  Dingwall then did the same thing at the other end, causing panic, but Elgin cleared.

In the 64th minute, Mailer put a bruising tackle in on Connell who had to have a fair bit of treatment.  Unfortunately, his thoughts on the matter were heard by the referee and he was booked, to join Stuart Morrison.

76 minutes and it certainly looked all over for Queen’s.  Craig Brown, the son of the man of the same name, won a hard tussle in midfield, fed Hester and the boy did what he does best.

We came back with a superbly worked goal down the right, Galt with a sublime backheel into the path of Connell who took no time to finish off, but it ended 3-2 for City and they deserved their win and a shot at the playoffs.

It was perhaps a disappointing end to what has been an outstanding season and we seemed to save up our mistakes for this one game, against a team that were fired up and had a top striker on top form

That said, the team have been terrific and we can look forward to a new challenge with loads of expectation; expectation that will hopefully be well-founded.