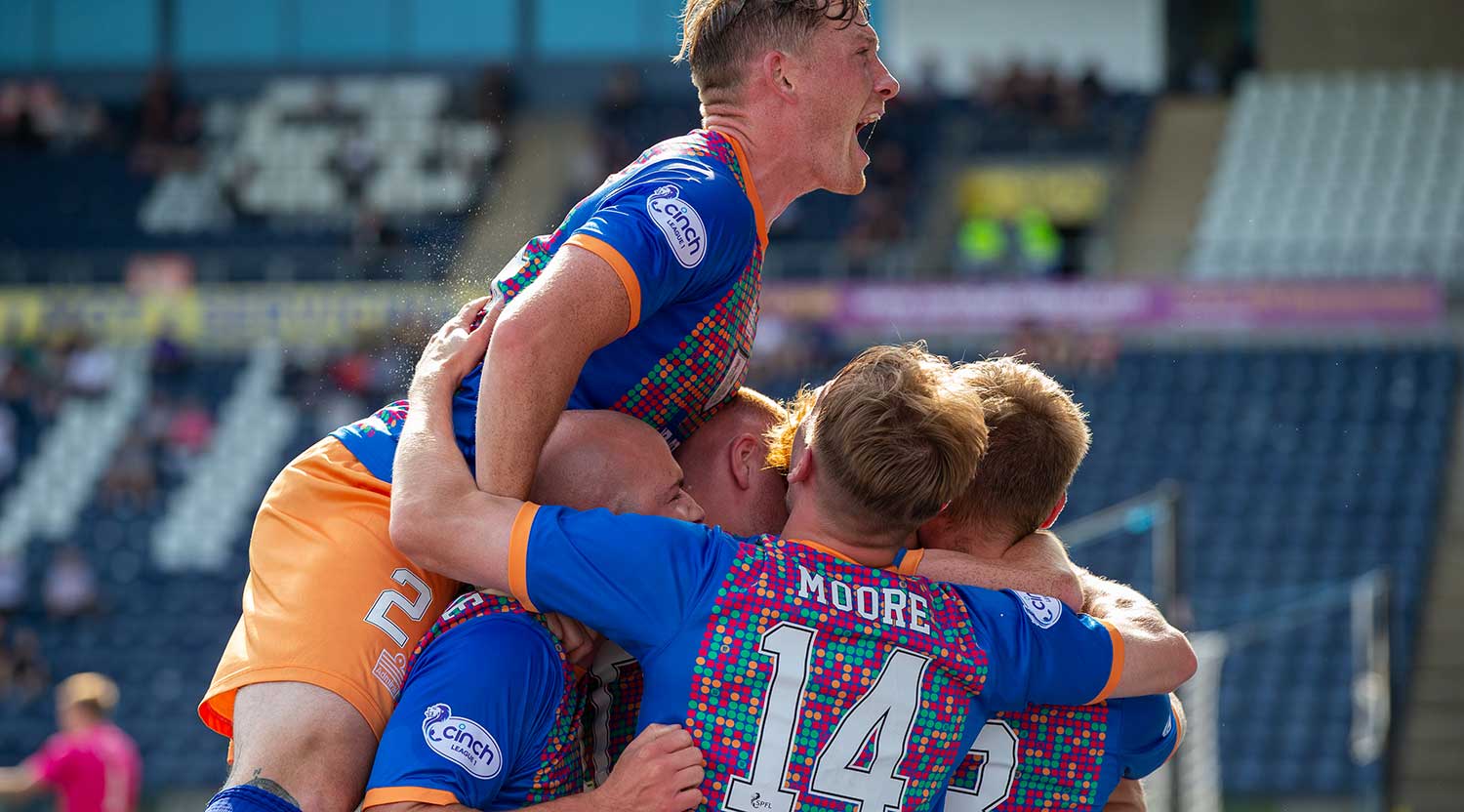 A superb free-kick from Simon Murray saw Queen’s Park battle to a huge win at Falkirk to put themselves top of the cinch League 1 table.

In the first league meeting between the sides since 1983, Laurie Ellis made just one change to his team that drew away at Alloa last time out as Lee Kilday returned from a pre-season injury to replace Charlie Fox at the heart of the defence.

Before kick-off, the hosts sat one place above Queen’s in the table after a comprehensive 3-0 victory over Clyde.

A beautiful day and a 4,000-strong crowd greeted the players at the Falkirk Stadium but there was a forced early change as Stuart Morrison picked up a knock meaning Fox’s spell on the bench didn’t last long.

The first openings of the match saw Aidan Nesbitt’s shot well blocked by Fox before Seb Ross fired over Willie Muir’s bar and some sharp play inside the box from Aidan Keena as the striker shot wide at the near post.

A golden chance then came the way of the Spiders after a decent spell of possession as Jack Thomson clipped a ball over the top of the defence for Murray who shrugged off his man but pulled his low finish wide of the post.

Up the other end, Falkirk looked as though they had instantly responded with a goal through Callumn Morrison running in off the right but the linesman’s flag cut short any celebrations.

From a corner, the Queen’s defence was caught sleeping giving all the space in world for Ross who should have directed his header far better as it rolled harmlessly wide.

Despite the month of September just around the corner, the conditions were still sufficient for referee Alan Muir to call a water break as both sides regrouped after a busy opening period.

A driving run 10 minutes before the break from Lewis Moore then allowed Murray to take aim from a dead ball just outside the area and he duly delivered as he whipped the ball over the wall and past Robbie Mutch for the lead.

Just as the striker had done against Cove a few weeks ago, another sublime free-kick gave Queen’s the advantage here.

The ball in behind for Murray was giving the visitors a lot of joy and allowed them to stretch the game as Falkirk struggled to create clear cut chances when they did have the ball and got more and more frustrated as the half went on.

Despite a strong showing at the back from Fox after coming off the bench, just six minutes after the break, the Englishman was adjudged to have caught Keena late in the box with a penalty kick looking like it would give the Bairns a route back into the game.

Morrison stepped up for the hosts but blasted his kick off the crossbar to keep the scoreline at 0-1.

Queen’s were starting to lead a charmed life in this game as Charlie Telfer’s snap shot came back off the post before being turned in by Keena on the rebound but once again the offside flag was up to deny the hosts.

With just under 30 minutes to play, there was a debut off the bench for Hearts loanee Connor Smith having only completed his move to the club this morning as he replaced Longridge and looked to play just behind Murray in the centre with Liam Brown moving towards the right hand side.

That substitute just took the sting out of the game as Falkirk struggled to find their second half momentum thereafter as Queen’s looked to get men behind the ball and defend their lead.

Inside the final 10 minutes, Fox had a header from a corner saved by Mutch as Queen’s took more control of the ball and began to kill the game.

Smith nearly marked his first appearance with a terrific goal but the goalkeeper was equal to his strike to tip it wide.

Falkirk huffed and puffed but their end product was poor as the visitors held on.

A mighty impressive victory against their fellow full-timers saw the Spiders return to the summit of the table with Montrose and Cove Rangers both losing.