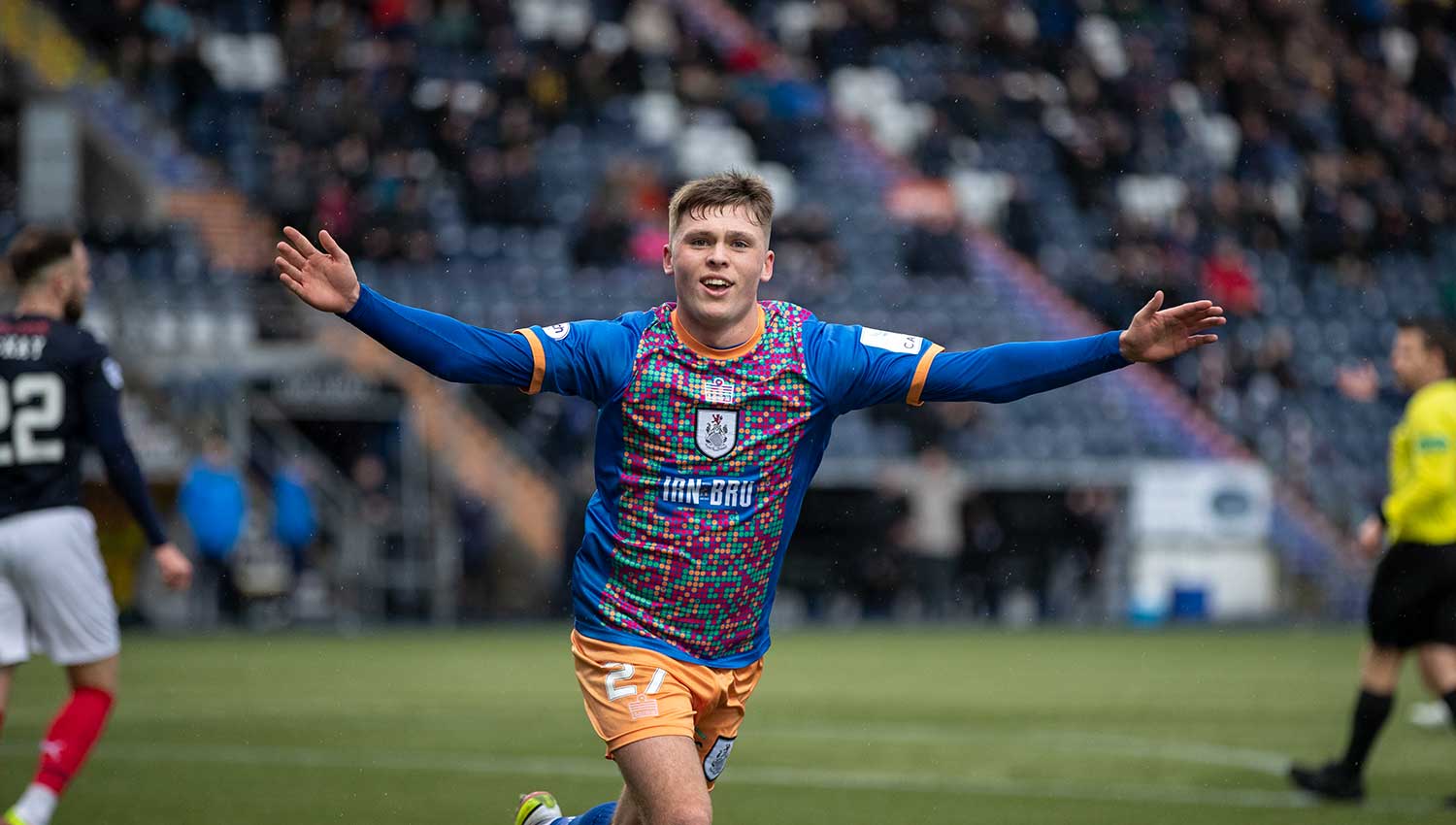 Queen’s Park and Falkirk shared the points in an evenly contested match which finished 1-1.

The Spiders and Falkirk were meeting for the third team in the league this season and the last time both teams met, Queen’s came out on top with a resounding 6-0 victory. Situations for both sides have changed since the last match and that includes both clubs changing manager.

The Spiders made two changes to their side that drew with Airdrie last Saturday. Liam Brown and Bob McHugh coming out of the team and they were replaced by Luis Longstaff and Connor McBride, respectively. Our three latest signings who arrived on transfer deadline day were all involved in the squad. Connor McBride made his first start for the club since arriving on loan from Blackburn and Dylan Reid and Ronan Darcy were on the bench who also arrived on loan from St Mirren and Bolton, respectively. Welcome to the club!

Falkirk manager Martin Rennie made three changes to his side who lost away to Montrose last week with Paul Dixon, Keaghen Jacobs, and Brad McKay coming into the side and Jevon Mills, Gary Miller, and Aidan Nesbitt coming out.

After a bright start from the Spiders, their first half chance of the game fell in the 7th minute when a throw in from the left led to Grant Gillespie picking up the ball in the middle and he passed out to his right to Luis Longstaff who cut in onto his left foot, but he dragged his shot wide of the post.

Queen’s Park continued their bright start to the game and in the 15th, minute took the lead when loose play from Falkirk led to Longstaff picking the ball up in the middle and his driving run and pass out to his left to Connor Smith who cut in onto his right foot and scored into the keepers left hand corner to score his third league goal of the season.

The Spiders were determined not to concede right from kick off like they did against Airdrie last Saturday and in the 23rd minute they could have made it more comfortable when decent work down the right from Queens Park led to Longstaff picking out Longridge whose low shot deflected and went wide of the post.

Falkirk started to grow into the game and in the 32nd minute a short corner from the home side led to the resulting cross going into the box and with no one making clear contact, the ball narrowly went wide of Ferrie’s post.

The home side were having more of the ball and had another chance in the 36th minute when they switched the ball out onto the right and Ryan Williamson’s cross was cleared by the Queen’s defence, but the ball fell to Craig McGuffie on the edge of the box, but his shot blazed over the bar.
Falkirk were winning a lot of corners and in the 40th minute a corner from McGuffie was met by McKay but his header again went over the bar.

The last chance of the 1st half again fell to the home side when another corner was failed to be cleared and Keaghen Jacobs shot went over the bar.

Queen’s Park were dealt a blow just before half time when Luca Connell came off injured. Queen’s would be happy that they had the lead whereas Falkirk would be left frustrated that they have not taken at least one of their chances.

The start of the second half, and Falkirk got off to the perfect start as they equalised in the 49th minute. A cross from the right from Williamson lead to Paul Dixon not making contact with his shot but the ball fell to Anton Dowds in the middle of the box, and he slotted the ball past Ferrie into the bottom corner.

It was evident that the home side started the second half better as the Spiders were struggling to get on the ball and make some passes.

Queen’s Park could have taken a surprising lead though in the 62nd minute when Lee Kilday managed to nick the ball in the opposition’s half, and he managed to find his way into the box but didn’t get his shot away and it was comfortably collected by Robbie Mutch.

The home side reacted to that opportunity in the 67th minute when a corner by Telfer was met by goal scorer Dowds but his header was caught by Ferrie.

Both sides were struggling to create chances and made substitutions in the hope they could get a grip on the game.

In the 75th minute, the home side nearly took the lead when good play down the right by Falkirk led to sub Aidan Nesbitt to pick up the ball and his chipped shot was heading for the far corner, but Ferrie tipped it away and out of the danger zone.

Queen’s reacted to the home side’s opportunity and in the 80th minute there was nearly a dream debut for Ronan Darcy as he managed to pick the ball up in the middle of the pitch and from just outside the box, he had an effort that just went wide of the post. The away side were having a better spell as the game headed towards the last few minutes.

The Spiders nearly took the lead again 2 minutes later when debutant Darcy managed to create a good opportunity down the right and his pass fell to goal scorer Smith in the box, but his shot was smartly saved by Mutch from eight yards out.

Both sides were pushing for the winner, but it didn’t fall to either side and in the last moments of the match, Aidan Nesbitt was sent off for a off the ball incident.

The Spiders next match is on Tuesday at home to Dumbarton.