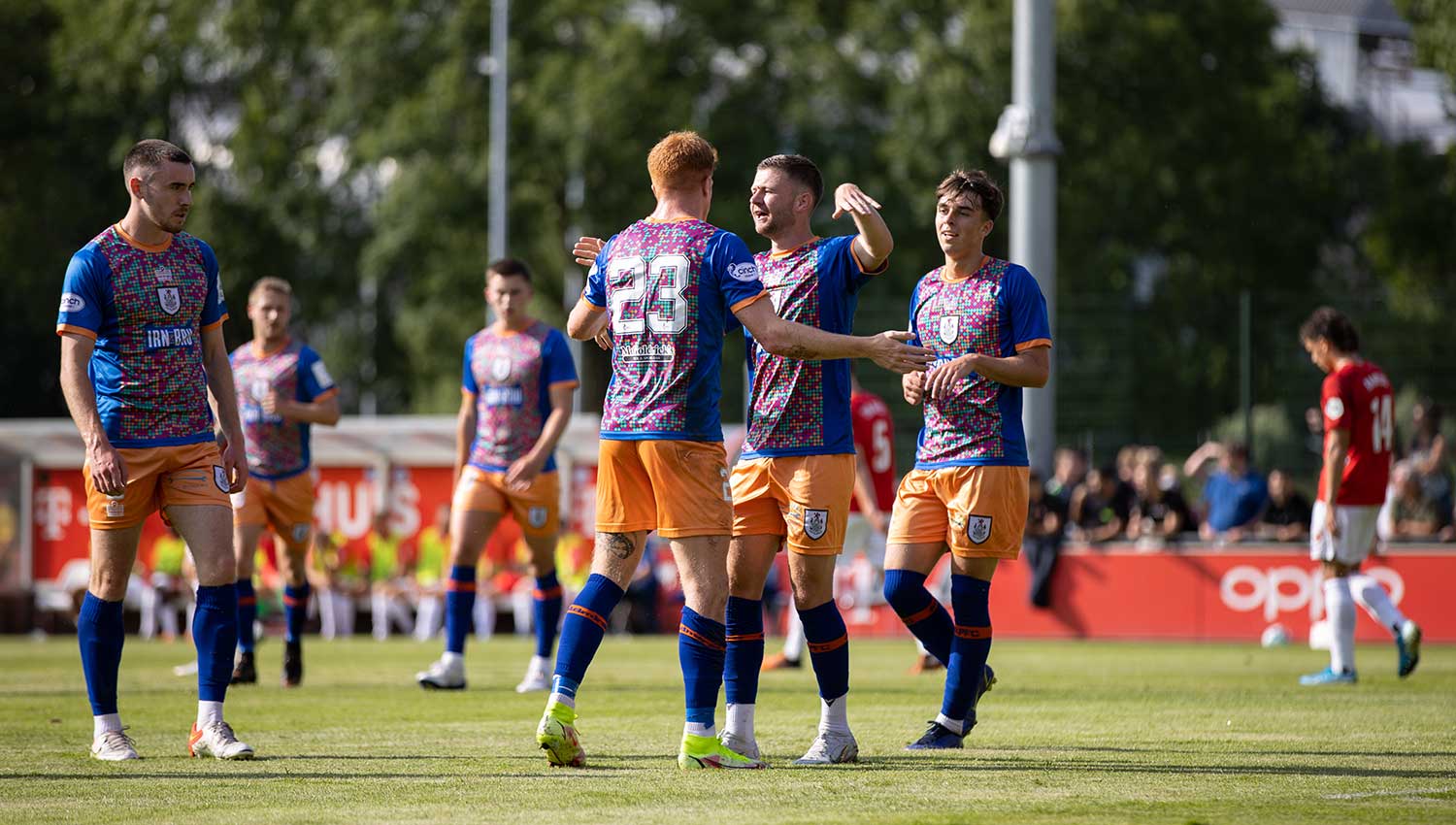 A large crowd of over 1200 welcomed both sides to the immaculate playing surface of FC Utrecht’s Sportcomplex Zoudenbalch. It was another very warm evening for football, thankfully a few degrees less than Wednesday’s game.

FC Utrecht kicked the game off and immediately took the game to Queen’s.

However it was the Spiders who had the first chance when, after a great run by Grant Savoury, his shot was saved by FC Utrecht keeper Barkas.

The Dutch side looked comfortable on the ball, dominating possession in the opening period of the game.

That all changed in the 12th minute when Dom Thomas burst down the left wing and cut the ball back to Simon Murray, who slotted the ball into the corner of the net for the opening goal.

FC Utrecht continued to dominate play, moving the ball about the superb playing surface, but without creating any real scoring opportunities.

Their first shot on goal was in the 24th minute which Calum Ferrie easily dealt with.

Five minutes later FC Utrecht equalised. A cross from the left was met by Veerman who steered the ball into the net.

FC Utrecht replaced their entire starting 11 for the second half.

Queen’s started the second half with a bang. Two minutes into the half, after a fast attack down the right by Dom Thomas, the ball was switched to Simon Murray. The ball then was played wide left to Louis Longridge. Louis cut the ball back for Simon Murray who narrowly missed the target.

FC Utrecht continued with their game plan of keeping possession and looking for holes in the Queen’s defence. They created a couple of near chances but poor finishing and good goalkeeping by Calum Ferrie denied them.

Queen’s regained the lead in the 56th minute when Simon Murry took advantage of a defensive error to nick the ball and smash it through the legs of the advancing Nijhuis.

FC Utrecht responded two minutes later when they broke down the right wing. El Azrak connected with the cross to fire home.

Calum Ferrie pulled off a superb save, in the 63rd minute, to deny FC Utrecht the lead.

In the 73rd minute Charlie Fox intercepted a through pass, turned and played the ball to Grant Savoury. Grant cut into the FC Utrecht box and hit an unstoppable shot across Nijhuis into the far corner of the net.

This was followed up four minutes later when Trialist drilled a low shot into the corner of the net from 25 yards out. 4-2 to Queen’s.

Gallery from the game