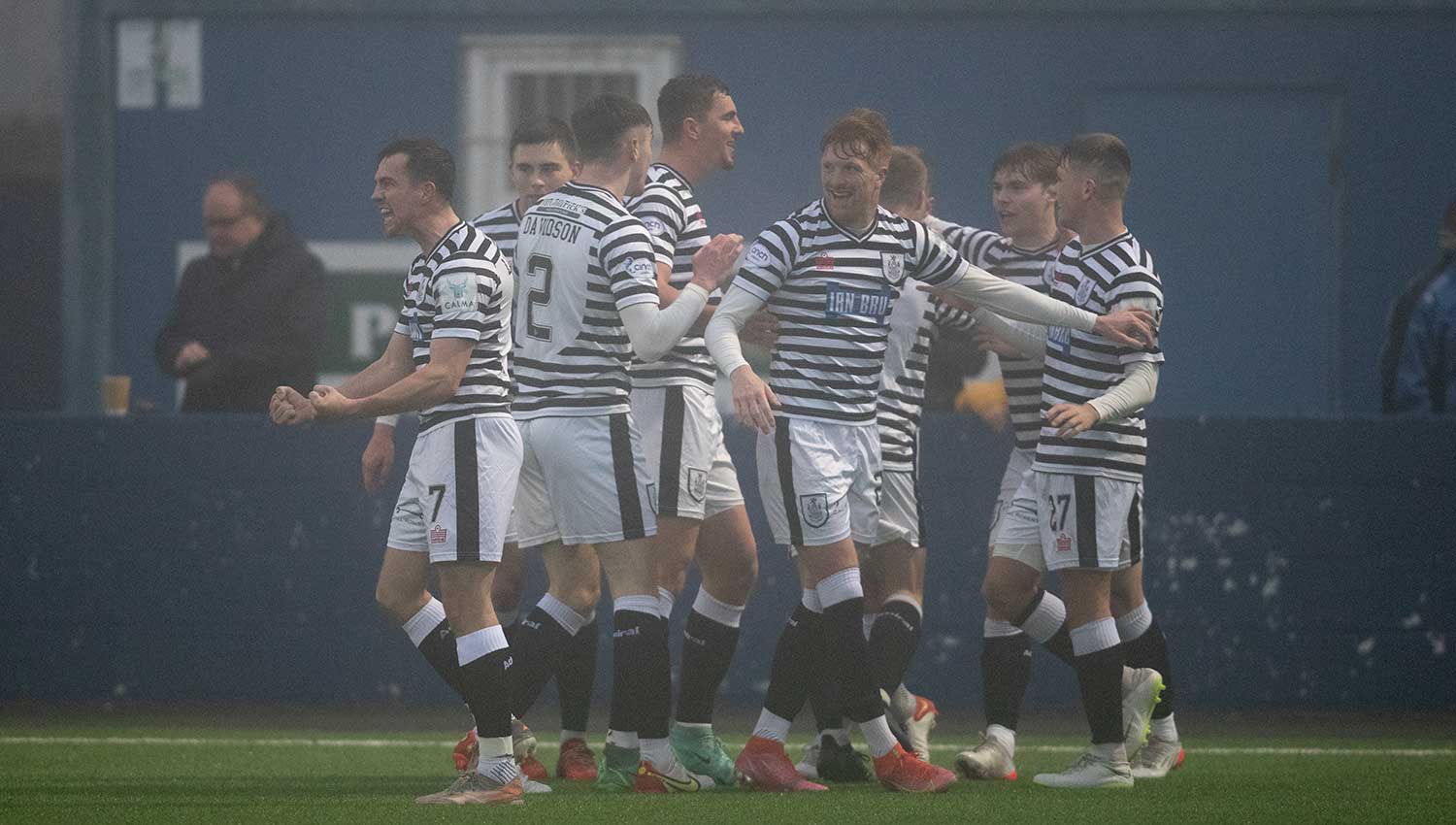 Queen’s picked up a point in a keenly contested encounter at fog bound Links Park.

The first half chance of the game fell to Montrose after only a few minutes. Ballantyne fizzed a ball into Keatings’ feet and he turned his man before he played a reverse ball into the box, but the returning Michael Doyle smothered the opportunity with a tremendous block and Calum Ferrie gathered comfortably.

In the 20th minute, Montrose had a chance to open the scoring however Queen’s keeper Ferrie saved striker Keatings’ shot from close range.

Louis Longridge opened the scoring for the Spiders on the 25th minute. Grant Gillespie played an exquisite outside of the boot pass in between the Montrose right back and central defender, the weight of the pass was perfect for the on-rushing Longridge who took a touch before deftly dinking it over the on-rushing Lennox. Queen’s one up!

Shortly before half time Simon Murray went down clutching his right knee. After treatment, he tried to run it off but was unable to continue. On came Luis Longstaff to replace him.

It was a cagey affair in the first half, with both teams not giving away many chances in this top of the table clash. The one true moment of quality came when Gillespie and Longridge combined to put the Spiders 1-0 up at half time.

The second half had the worst possible start for Queen’s as 3 minutes after the restart the home side were awarded a penalty. Lyons danced past 3 or 4 players into the box before Thomson fouled him from behind and was yellow carded for his troubles. The resulting penalty sees Webster send Ferrie the wrong way and powers a side footed effort into the net to level the score.

Boosted by the penalty equaliser, the home side pressed forward, forcing Queen’s to defend. The next opportunity came in the 51st minute and it was that man again Webster but this time his strike at goal was more opportunistic as his effort sailed comfortably over the bar from 20 yards out.

A few minutes later Lyons jinked past Doyle before unleashing a ferocious effort into the bottom left-hand corner but Ferrie was equal to it with a terrific save.

On the hour mark Montrose made their first change of the game as they looked to continue their terrific start to the second half. On comes Craig Brown who is the grandson of former Scotland manager, Craig Brown.

It only takes the substitute a mere 5 minutes to make his mark as he flashes a left footed effort from 25 yards, but his volley goes just shy of the left-hand post.

Another substitution from Montrose sees Keatings being replaced by Antoniazzi on the 68th minute. He has been quiet today, but Davidson has certainly chaperoned him well.

Queen’s began to push forward in the closing stages as Head Coach Laurie Ellis encouraged his side to go for the win. Luca Connell shrug off his man with ease before unleashing a curling effort at goal from the right-hand side of the box, bringing a good save from Lennox who took no chances with his dipping effort and punched it clear.

Just a minute later Montrose pick up their first booking of the match which saw Ballantyne go into the book for his challenge on Doyle.

Queen’s survived a succession of corners in the closing stages but defended well and the match ended all square. The visitors had the better of the first half but Montrose came out strongly at the start of the second half and forced the Spiders back, who struggled at times without a focal point upfront having lost Simon Murray to injury.

The Spiders will be looking to get back to winning ways as soon as possible with their next League fixture at home to Dumbarton on Boxing Day.

On a bitterly cold and foggy day in Montrose, the official attendance was 594.