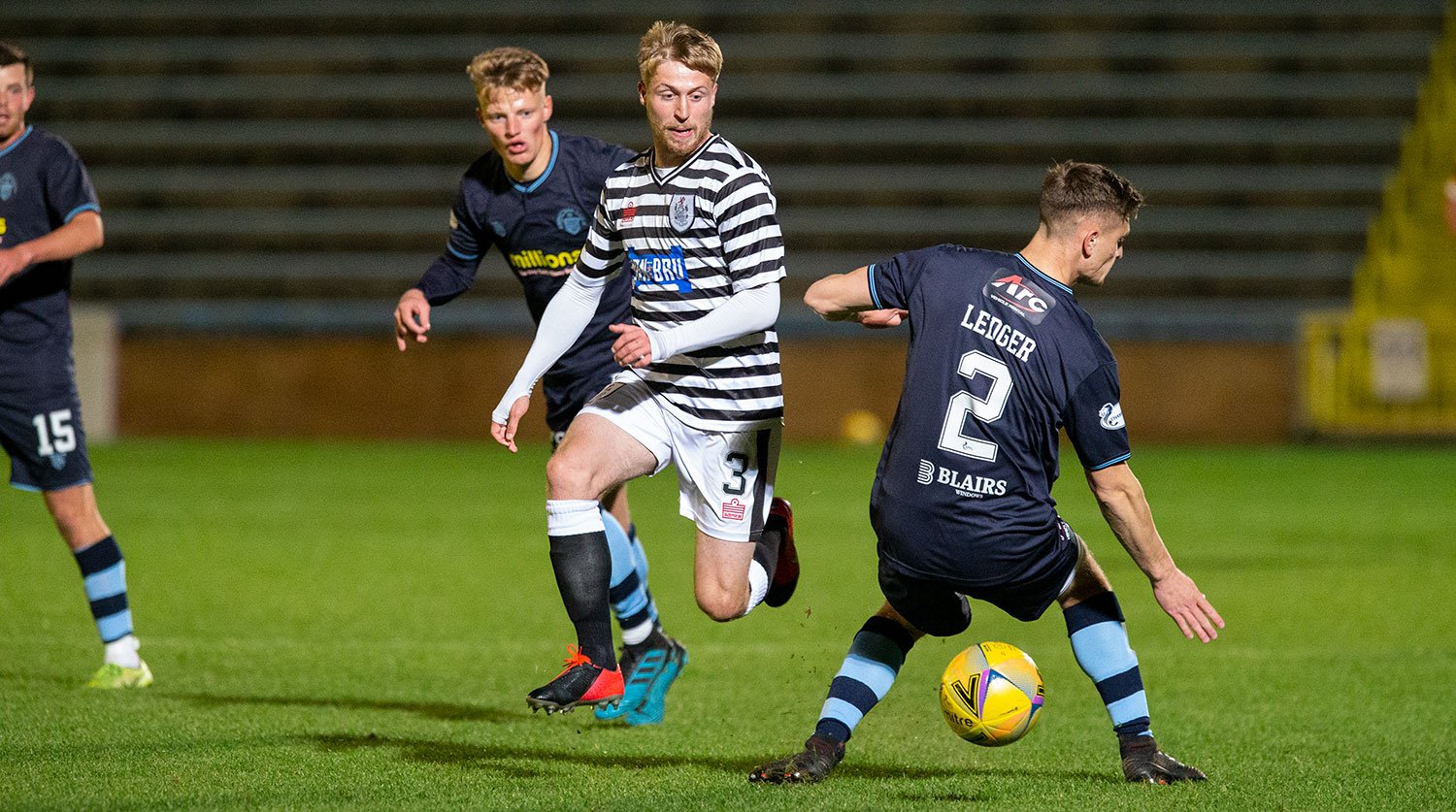 Queen’s made the short trip along the Clyde to Cappielow to face Greenock Morton in our second League Cup fixture on Tuesday evening. Following on from last Saturday’s 2-0 defeat at Firhill it was a quick turnaround for the Spiders.

Ray McKinnon sought to shuffle his small pack with three changes made to the starting line-up. Lee Kilday and Will Baynham were awarded their first competitive starts for the club alongside Spiders’ veteran David Galt coming in. Dropping to the bench were Stuart Morrison, Ross MacLean and Brody Paterson – who were also joined by youngsters Callum Biggar, Max Gillies and goalkeeper Jacques Heraghty.

Whereas Morton, blessed with a much larger player pool, made a total of nine changes to the side that drew 2-2 with Queen of the South last Tuesday. David Hopkin in the ‘Ton dugout appeared to deploy an unconventional 3-1-4-1-1 setup.

By contrast, Queen’s lined up in a more traditional 4-4-2 formation and returned to their historic black and white hooped kits. Willie Muir (who could be spotted from the James Watt Dock Crane in his bright pink jersey) continued between the sticks with a back four consisting of three former Cappielow men. Tommy Robson joined the former ‘Ton trio of Michael Doyle, Lee Kilday and captain Peter Grant.

Grant Gillespie and Darren Lyon continued as the central midfield partnership with Louis Longridge deployed on the right and Galt on the left. Australian born Canadian Will Baynham joined former Morton hitman Bob McHugh upfront as Queen’s looked to adopt an offensive approach.

Queen’s started proceedings and took the game to their Greenock counterparts. It was the Spiders who had the first real chance of the game with Robson’s deep cross headed wide of the post by the burly Baynham.

Only a minute later Luca Colville had Morton’s first chance of the evening. The young Englishman evaded the clutches of Kilday and saw his left-footed strike deflect off Doyle’s heel. However, Muir was alert and reacted sharply to make a strong save low to his left.

It was end-to-end as Queens immediately went straight up the other end of the park. Robson and Baynham combined again, this time with a tidy one-two inviting the full-back into the penalty area where he appeared to be clipped from behind. Despite the appeals, referee Gavin Ross was unmoved and allowed play to continue much to Robson’s bemusement.

The fast-paced start to the game continued as Gillespie dropped his shoulder to create space for himself in the middle of the park. He then dribbled forward and went for goal, but his effort was deflected wide of Aidan McAdams’ near post for a Queen’s corner.

Following the action-packed opening exchanges, the game began to settle down as the ‘Ton started to get to grips with the Spiders. The next opportunity of note did not come until ten minutes before half-time. Robson felled Cameron Salkeld on the edge of the box and Morton were presented with a threatening freekick opportunity. Robbie Muirhead stepped up and fired his strike narrowly over Muir’s crossbar.

It was now Morton pushing on in search of the opening goal with nippy frontman Gary Oliver being their main creative force. The striker had not long been booked for a dangerous challenge on Doyle which seemed to spark his involvement in the contest.

As half-time approached Oliver’s direct running from the left flank had the Queen’s defence chasing shadows. He had broken into the box after linking up with Colville but his low driven shot at goal was held by Muir.

It was the home side who began the second half on the front foot. Captain Sean McGinty’s cross-field ball found Salkeld on the right. He then slipped in the impressive Oliver who set up Cameron Blues for a first-time shot which he placed past Muir and into the net to break the deadlock.

Confusion descended on Cappielow following the award of a freekick to the Spiders on the edge of the Morton penalty area. Queen’s sought to introduce Paterson to the action with Robson leaving the pitch, but before the Celtic loanee entered the field of play McHugh had smacked the freekick straight at McAdams who punched the ball clear. Upon Paterson’s eventual entry onto the field, many Queen’s players felt aggrieved that the freekick

A double change by Morton then created further confusion. Salkeld and goal scorer Blues were taken off by ‘Ton manager Hopkin. However, as Aidan Nesbitt and Joshua McPake were about to come on the officials entered into deep discussion whilst examining their paperwork. It was McPake – wearing the number 25 – that made for the uncertainty as he was listed as number 26 on the team lines. After some time, referee Ross allowed McPake onto the field of play whilst Queen’s brought on Ross MacLean for Baynham as time ticked on.

Queen’s pressed for an equaliser and Morton centre back Markus Fjørtoft hauled down McHugh around thirty yards from goal. Galt’s eyes lit up as he lined up the freekick, but his powerful effort was blocked by the well-assembled wall.

Longridge – who had been given more of a free-role following the introduction of MacLean – drifted out to the right and cut inside onto his left foot before delivering an enticing ball across the six-yard box. Galt was tempted by the cross, but he could not quite stretch for the ball at the back post.

McKinnon handed a first-team debut to midfielder Callum Biggar with the youngster replacing the tireless Galt who had recently been booked for fouling his opponent. Both Orsi and Nesbitt were then cautioned as Morton attempted to see out the dying embers of the game.

Into the final minute, and ‘Ton substitute McPake raced forward but he was halted in his tracks by Longridge. The former Falkirk man received a deserved booking and Colville’s freekick effort was deflected off the wall and over the bar before referee Ross blew his whistle for full-time.

Undeterred by the result, head coach Ray McKinnon sought to focus on the positives as we were arguably unfortunate to have lost the game and matched Championship opposition throughout. With the new league campaign on the horizon, the gaffer was encouraged to have increased match fitness levels ahead of Saturday’s crucial league opener away to Stirling Albion.