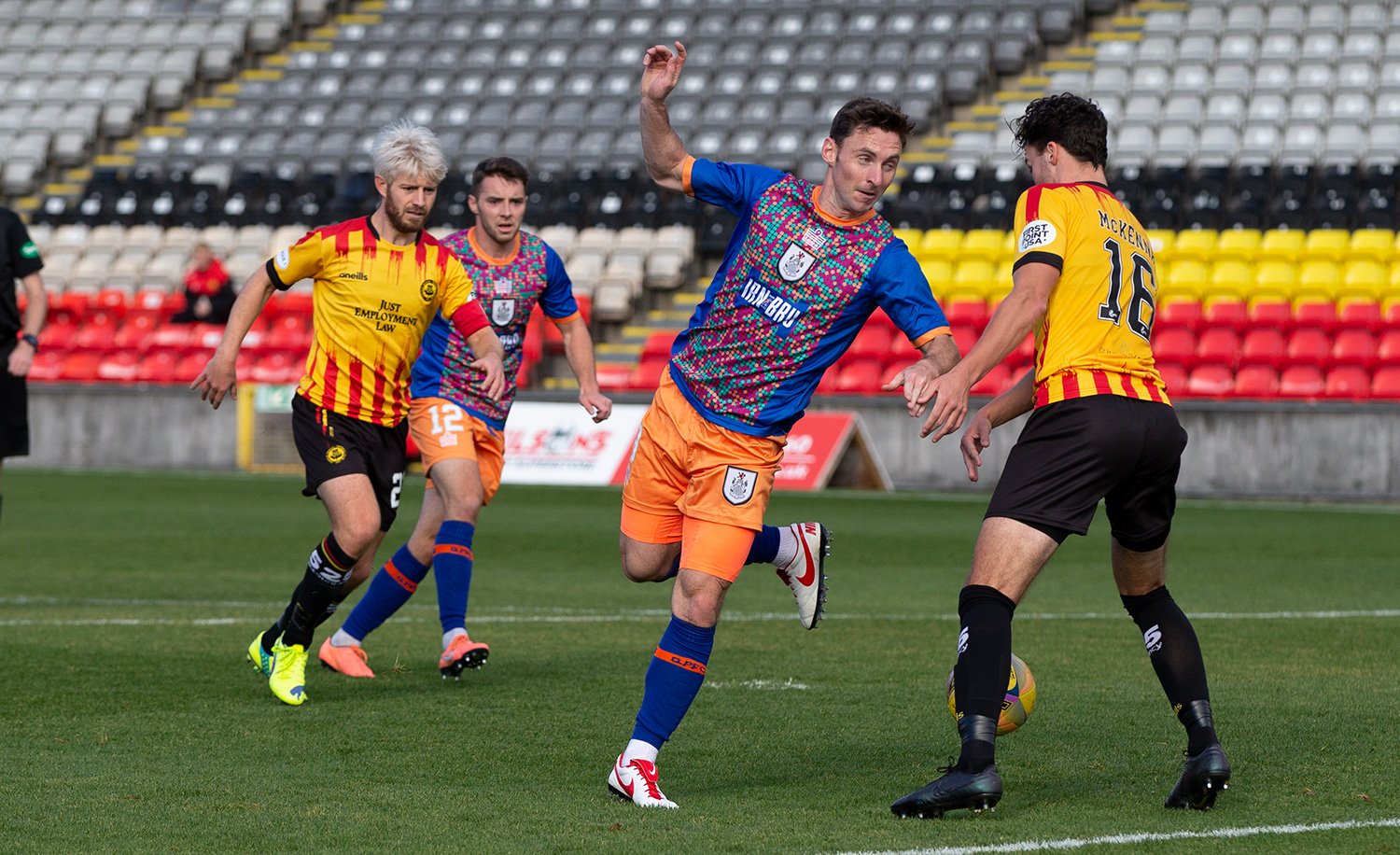 A lot has changed in the world since Queen’s Park last played in what was a scoreless draw against Stenhousemuir at Ochilview Stadium in early March. Our push for the promotion play-offs was subsequently halted and the season curtailed as we all adapted to our new restricted way of living. Seven long months later and the Spiders are finally taking to the field again in competitive action. Partick Thistle are the opposition and Firhill Stadium is the destination as Queen’s Park kick off their League Cup campaign.

The Spiders have been handed a challenging group with all clubs being full-time. A trip to play Greenock Morton follows this Tuesday with our remaining fixtures at home to Queen of the South and St Mirren to be played in November. Progression to the knock-out stages will be a tall task even with our new full-time status.

Head coach Ray McKinnon is currently in the process of assembling a strong squad ahead of the truncated League Two campaign.However, with injuries to Cammy Bell, Craig Slater, Simon Murray and Lee Kilday, the squad depth is already being tested with only the latter fit enough for a place on the bench.

Familiar faces were deployed at the heart of the defence with Willie Muir in goals (sporting an all dark green goalkeeper kit) alongside the centre-back pairing of Peter Grant and the now permanent signing of Stuart Morrison following his impressive loan spell towards to end last season.

With the exception of Ross MacLean – several of McKinnon’s new recruits were handed their Spiders’ debuts. The energetic Michael Doyle was deployed at right full-back with former Thistle player Tommy Robson returning to Firhill on the left side of the defence to complete the back four.

Grant Gillespie and Darren Lyon formed a central midfield partnership with Louis Longridge sitting just ahead of them. Bob McHugh spearheaded the attack with Celtic loanee Brody Paterson supporting from the left-wing and MacLean from the opposite flank.

The sides last met at the same stage last season with Partick Thistle ending up 2-1 winners at the Excelsior Stadium. Tommy Robson – then of Partick Thistle – scored and assisted that evening with former Spider Salim Kouider-Aissa (now on loan at Firhill following his move to Livingston) grabbing a headed consolation goal for Queen’s.

The Jags possess a strong squad and will be one of the favourites to win the League One title as they look to bounce back to the Championship at the first attempt. Managed by ex-Spider Ian McCall, Thistle named an attacking line-up determined to make up for their 4-1 defeat away to St Mirren in their opening midweek group fixture.

Peter Grant led the team out from the makeshift away changing rooms in the Jackie Husband stand. With fans unable to attend matches, it was a surreal atmosphere with only a small smattering of masked volunteers and media personnel able to observe proceedings.

The Spiders were also debuting their new ‘Most Historic Kit’ which has certainly split opinions amongst football fans. Inspired by Irn-Bru colours, the top has a base colour of blue and is covered in red, yellow and green dots signifying the club’s league results since 1900.

Longridge kicked off the contest as Queen’s played into the low October sun. Despite Thistle winning an early flurry of corners it was Queen’s who created the first real chance in the eighth minute. Doyle and Longridge exchanged passes on the right wing with Doyle’s low cross resulting in McHugh’s acrobatic effort which finished wide of the near post.

Thistle then continued to rack up another series of corners which were being taken by former Hampden graduate Blair Spittal. It was Spittal’s delivery that almost provided the opening goal of the game but Brownlie was unable to direct his unchallenged header on target.

Thistle were using both flanks well – getting full-backs Foster and Penrice into advanced positions. However, Queen’s showed good defensive organisation and discipline and were quick to close down their opponents.

It was not until ten minutes before half-time before Queen’s ventured forward again with any real purpose. A ball played out wide by McHugh allowed Longridge the opportunity to cut inside and clip a ball towards MacLean at the back post. The nippy winger rose well and attempted to loop his header over Sneddon in the Thistle goal but the ‘keeper managed to grasp the ball with relative ease.

Only a minute later and Queen’s were bearing down on the Thistle goal again. Longridge created space for himself with a clever turn inside and played a perfectly weighted forward pass into the path of Lyon however his powerful effort from the edge of the penalty area was straight at Sneddon.

As half-time approached Queen’s were holding their own and remaining competitive as Thistle’s more creative players were dropping into deeper positions in an attempt to get more involved in the game.

Thistle – now with an extra body in midfield and veteran striker Brian Graham as their focal point – started the second half on the front foot. Queen’s failed to clear their lines and the ball fell into the path of danger-man Blair Spittal in the penalty area. His well-struck half-volley was parried wide by Muir for Thistle’s umpteenth corner kick.

A mistimed challenge by Penrice caught MacLean on the edge of the area and presented the skillful Longridge with a set-piece opportunity. Feeling confident he went for goal but his curled effort was off target and never looked like troubling the Thistle goalkeeper.

Moments later Spittal dispossessed Doyle and when he was about to race away Doyle professionally halted him in his tracks leaving referee Kevin Graham no option but to issue his first booking of the day. Cardle’s resulting freekick was comfortably gathered by Muir.

Just after the hour mark McKinnon opted to make his first substitution with talisman David Galt replacing Paterson on the left. Thistle also made another change with Connor Murray coming on for Spittal.

Brian Graham was proving to be a constant nuisance with his physical presence causing problems. It was the big target man who headed wide from Docherty’s deep cross as Thistle started to take control of the game.

Not long after full-back Penrice surged forward. He cut inside and lofted an inch-perfect cross to Cardle at the back post who expertly volleyed the ball past Muir into the net to give Thistle the lead.

The new-look Spiders were now up against it and McKinnon introduced tall Australian striker Will Baynham for the recently cautioned MacLean. Longridge then moved out to the right as Baynham sought to provide support to the increasingly isolated McHugh upfront.

As time ticked on Queen’s were struggling to create opportunities and appeared to be tiring during their first competitive match in several months.

Thistle’s Graham and Docherty both found themselves in the referee’s notebook, the latter for a cynical foul on Lyon as Queen’s looked to break forward. Thistle then replaced Gordon for the powerful Mouhamed Niang to bulk up their midfield for the last ten minutes.

After clearing another Thistle corner Queen’s looked to break forward through Longridge but his pass to McHugh was intercepted by Niang leaving the Queen’s defence exposed. Niang shrugged off a few challenges and played the ball wide to Graham who picked out Cardle in plenty of space. He then jinked inside past the covering defender and found the net with a low left-footed effort past Muir for his – and Thistle’s – second goal of the game.

Following the concession of the second goal, Queen’s handed a debut to Lee Kilday who replaced Doyle. This saw Morrison shuffle across to see the remainder of the contest out at right-back with Kilday partnering Grant in central defence.

Niang was booked in the final minute for preventing Grant from taking a quick free-kick and shortly afterwards referee Graham blew his full-time whistle.

Despite the result, McKinnon will be able to draw on several positives. Queen’s competed well for the most part against opposition with greater quality than we will come up against at our level this season. However, the most important positive is that football is back and Queen’s are back. And as this was not a league match there will be no requirement to add this result as a red dot on our new away kit!