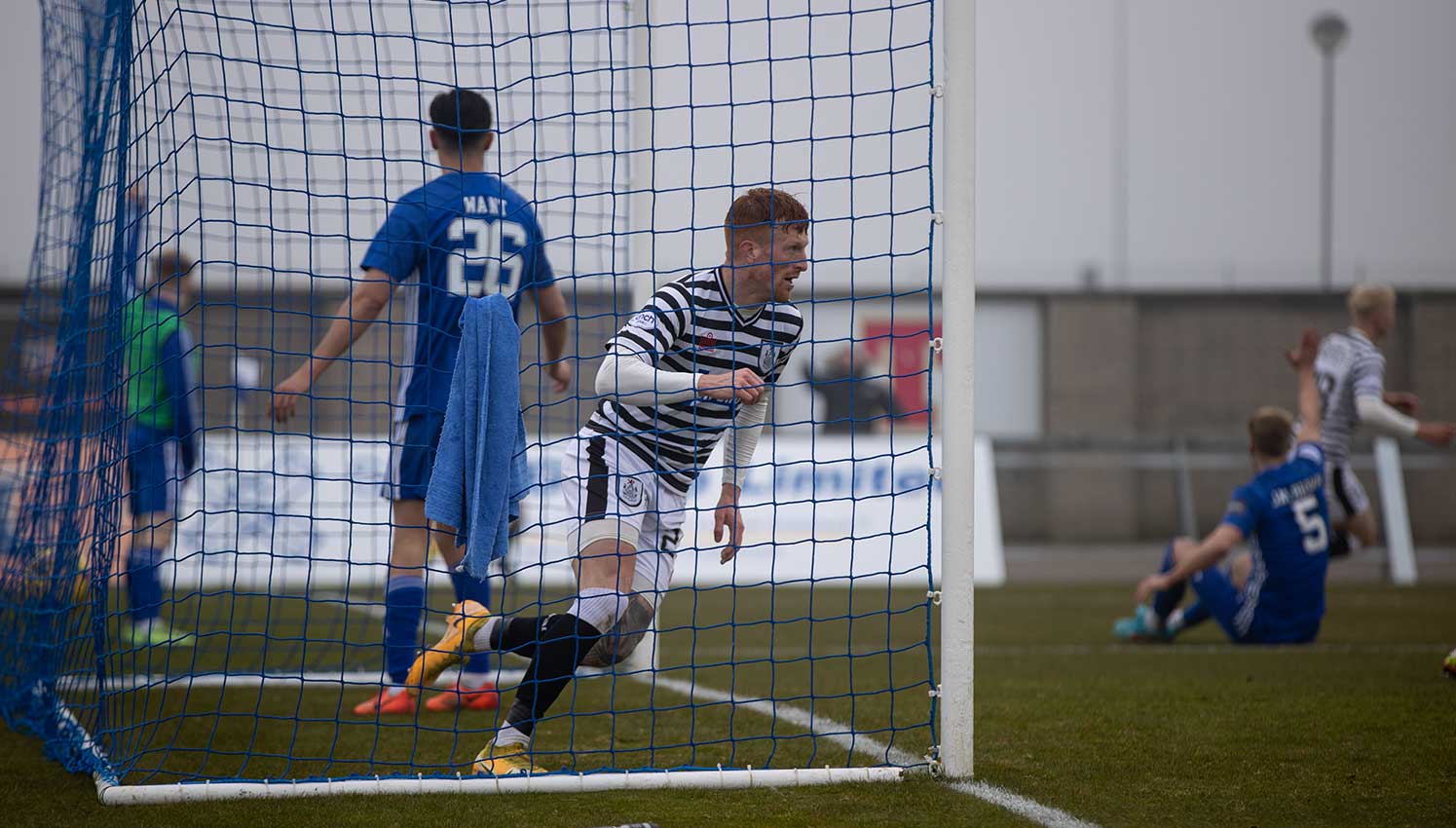 10-man Peterhead inflicted defeat on the Spiders as they ran out 2-1 winners at the Balmoor Stadium.

Queen’s Park made four changes from their last match where they won 1-0 against East Fife. Out went Lee Kilday, Connor Smith, Connor McBride, Bob McHugh, replaced by Jake Davidson, Peter Grant, Ronan Darcy, and Simon Murray. Changes from the Spiders as they look to freshen the squad up after clinching a play-off spot last time out.

The first chance of note came the way of the visitors on the 2nd minute. Captain Michael Doyle found the returning striker Simon Murray, who attempted an audacious half-volley which sailed narrowly over the bar.

Just 60 seconds later the deadlock was broken by the Blue Toon courtesy of Ryan Duncan. It was terrific initial play by Grant Savoury who spun Doyle with ease before he drove to the by-line and picked out Duncan on the penalty spot who made no mistake. His left footed effort was deflected into the bottom left hand corner leaving Calum Ferrie with no chance. 1-0 Peterhead.

On the 33rd minute Queen’s Park were denied a goal with a terrific last-ditch block from Andrew McDonald to deny Louis Longridge. Murray did well initially to hold the ball up and lay it off to Luca Connell who fired the ball first time in behind for Longridge who looked set to score, but for a goal saving challenge from McDonald.

Overall, a poor first half showing from both sides, but Peterhead will be the happier with the one goal advantage. The game is crying for a piece of magic from either side to really spark the game into life.

A mere 4 minutes into the second half and Peterhead doubled their lead. It was far too easy from a Queen’s Park perspective as Niah Payne had time to turn before leaving three Queen’s defenders in his wake. He played in a low ball into the box and picked out Savoury who managed to turn smartly before firing it into the back of the net. 2-0 Peterhead.

An instant response from the Spiders as Jake Davidson and Ronan Darcy made way for Connor Smith and Luis Longstaff to try and get back into the game.

An hour on the clock saw Peterhead nearly make it 3-0 as Ryan Duncan was inches away from his second of the game. A quick free kick from deep inside their own half caught out the Queens’ defence as Duncan collected in the right hand side of the box before cutting inside on his favoured left foot and unleashing a rasping effort that flew narrowly wide.

Less than five minutes later saw the Spiders spring into life with a lovely free flowing move with substitute Connor Smith at the heart of it. Smith nutmegged one then breezed past another before playing it to Longridge who then slid it down the side to fellow substitute Luis Longstaff. He fired a terrific ball across, and Simon Murray is in the right place at the right time like all good strikers to tap home. 2-1. Game on.

With just over 10 minutes to go, Blue Toon defender Jason Brown received his marching orders for what appeared to be an elbow on Queen’s Park substitute Connor Smith.

Another double substitution from the away side as goal scorer Simon Murray and Louis Longridge are replaced by Jai Quitongo and Connor McBride to add fresh legs at the top end of the park. Despite this change of personnel, Queen’s could not muster an equaliser.

Next up is an away trip to Montrose where Queen’s will be looking to bounce back with a victory to gain some momentum for the upcoming play-offs.