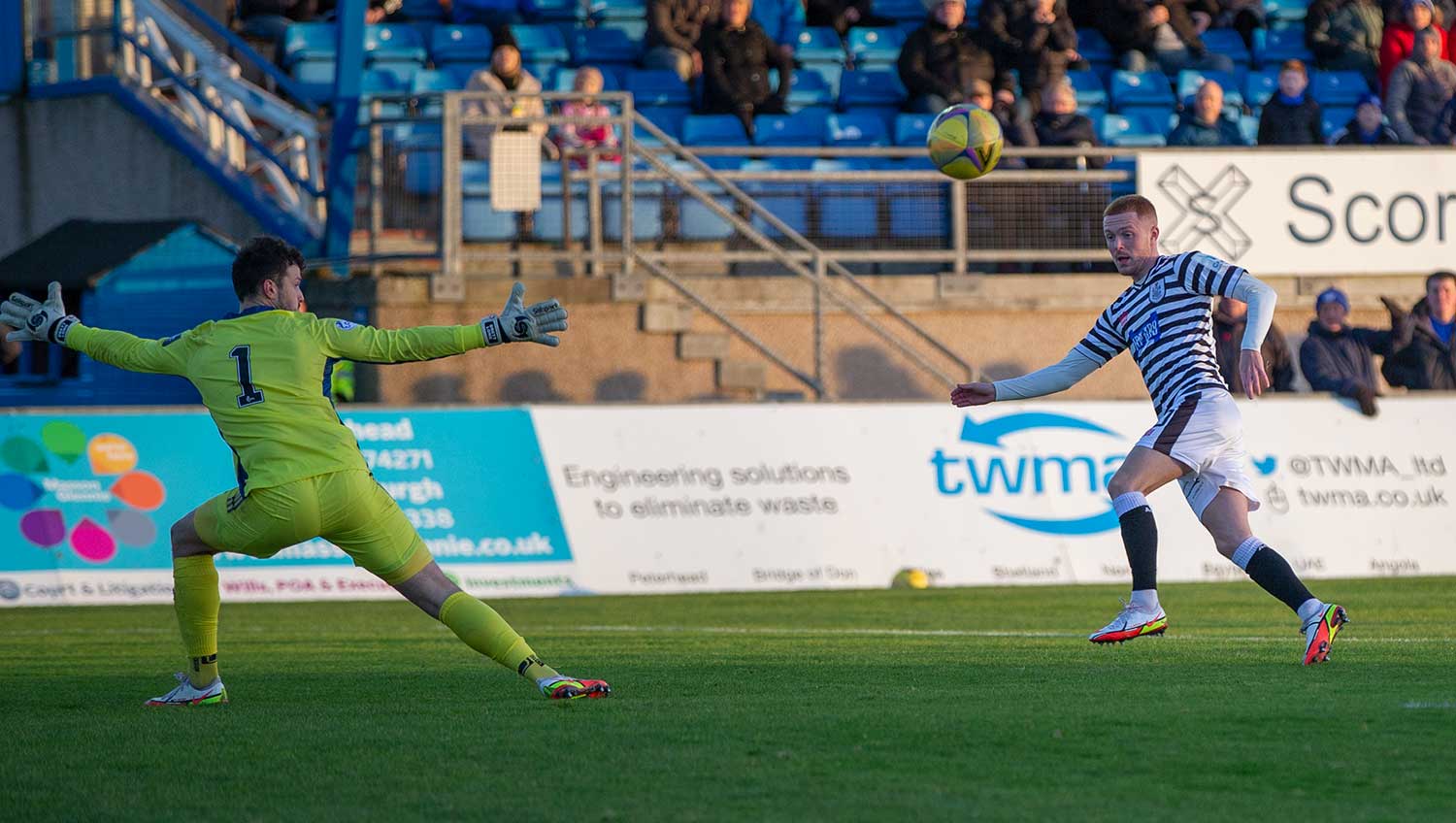 Russell McLean’s late strike for Peterhead was enough to give the home side all three points with Queen's Park making the long journey home from Balmoor Stadium disappointed.

Laurie Ellis made one change to his side with striker Bob McHugh making way for Simon Murray who returned after his two-match suspension. Peterhead manager Jim McInally made 3 changes to his side with Daniel Strachan, Lyall Cameron, and Grant Savoury coming into the starting line-up for the home team. The match got off to a bright start and Peterhead had the first chance in the 4th minute when Grant Savoury went on a driving run and his shot was tipped over the bar by Calum Ferrie.
The resulting corner was cleared, and Michael Doyle went on a terrific run and his through ball found Liam Brown who was one on one with the keeper, but his shot was brilliantly saved by Brett Long.

In the 9th minute, Queen’s Park scored the first goal of the game after a great passing move from the Spiders resulted in Simon Murray feeding the ball to Luca Connell who slotted it past Brett Long from the edge of the box to score his 3rd league goal of the season – his second goal of the season against Peterhead.

The Spiders nearly scored again a minute later. Loose play from Peterhead resulted in Luis Longstaff finding space in behind the home defence and his cross from the right found Louis Longridge who blazed his shot over the bar.

Queen’s continued to control the game but in the 25th minute Peterhead had a chance when good work down the left from Niah Payne resulted in him cutting in onto his right foot, but his shot was comfortably saved by Ferrie.

In the 27th minute, Queen’s Park were close to a second goal. Longstaff’s pass resulted in Michael Doyle running into space on the right. His cross was cleared for a corner after last-ditch Peterhead defending prevented Luca Connell tapping in.

Connell did manage to get another chance in the 31st minute when Longridge picked up the ball and passed to Connell whose shot beat Long in the Peterhead goal but smacked off the crossbar.

Queen’s Park went into half time the happier side one goal up.

The Spiders made a bright start to the second period, and in the 46th minute when Peterhead cleared a Queen’s corner, the ball fell to Connell outside the box and his first-time volley was hit with venom, but it narrowly went over the bar.

In the 55th minute, Peterhead were awarded a penalty when Grant Savoury’s corner resulted in Russell McLean being fouled in the box. The penalty was slotted into the left-hand corner by Scott Brown – all square and all to play for.

Peterhead grew in confidence after their equaliser and could have taken the lead in the 58th minute when good play by Duffy and Brown resulted in a chance for McLean, however he failed to hit the target – a let off for Queen’s.

The home side continued to push for the second goal and in the 75th minute took the lead for the first time in the match after Josh Mulligan picked up the ball and shot from 25 yards. Queen’s keeper Ferrie saved but couldn’t hold on and the loose ball fell to Russell McLean who tapped in from close range.

Queen’s had to reset themselves in the hope to try and get back in the game and in the 87th minute Liam Brown went on a dangerous run which resulted in the Spider’s winning a free kick just outside the box. The kick was taken by Simon Murray, but he hit it over the bar and that was the last chance of the game.

Queen’s Park have a break from league action next weekend when we welcome Kilmarnock to Firhill in the Scottish Cup.