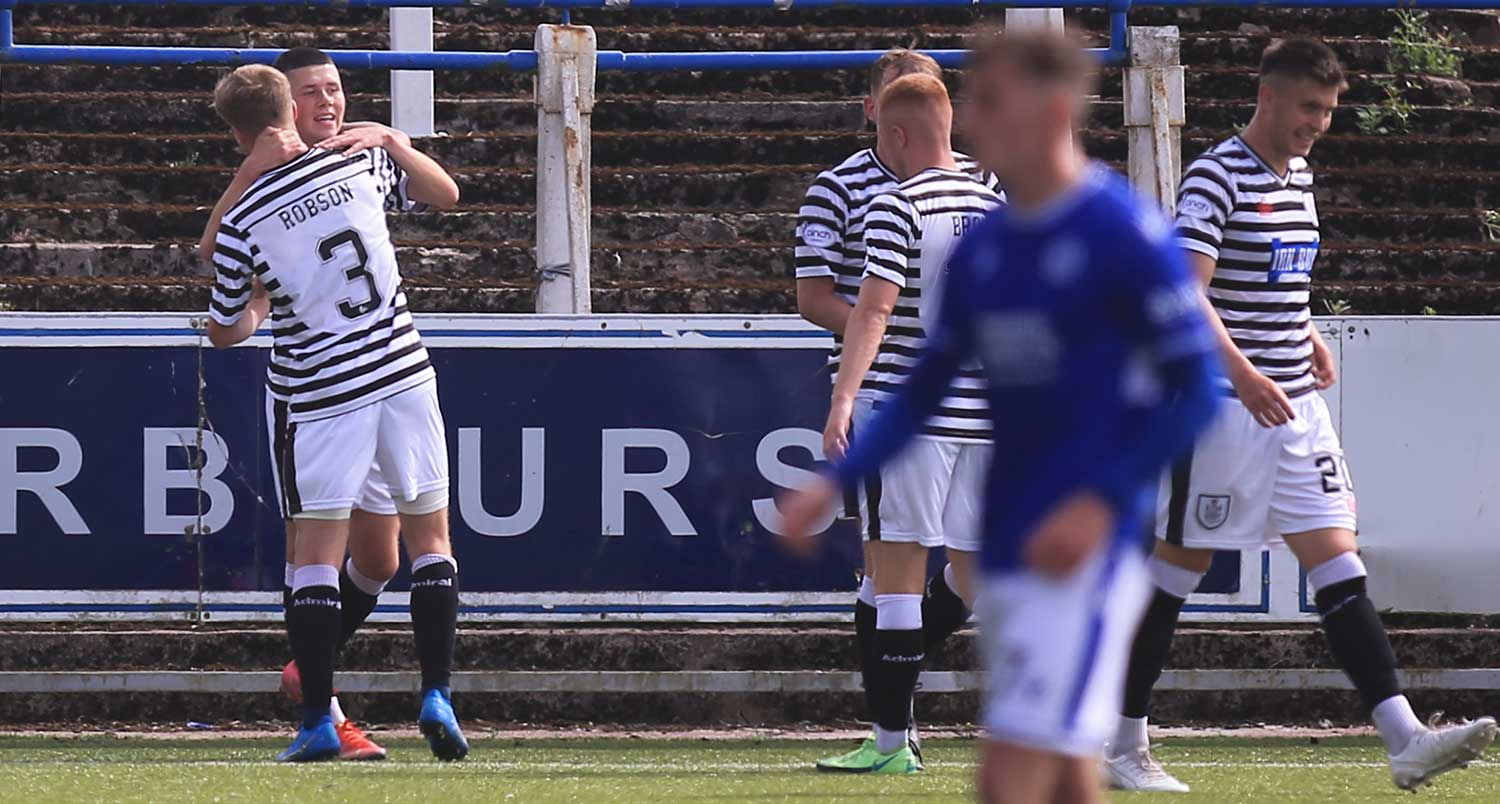 Queen of the South 0 Queen’s Park 1

It seems like an eternity since we lifted the League Two trophy, but the season started again with a challenging game at Dumfries against the team that well and truly sorted us out last year, in two games, perhaps indicating the gulf between where we were and where we should be aspiring to be.

After the very encouraging game at Kirkcaldy, where we fought hard to draw 2-2 with Raith Rovers, there were more omissions from the Queen’s side, with Lee Kilday still not right after coming off at Starks Park, and no fewer than eight players not available for reasons of injury, COVID and self-isolation, leaving numbers quite thin.

We quickly moved to sign up a couple of youngsters, Chris Mahon and Zach Mauchin, and they joined the bench. Thankfully, Darren Lyon passed a late test and took his place in the starting line-up, along with new signings Jake Davidson, Liam Brown and Lewis Moore; youngster Calum Biggar also started. Encouragingly, Simon Murray made the bench.

For QoS, they were trying to bed in eight new signings and, horror of horrors, had the gnarled veteran Wullie Gibson in their starting eleven, a man who has scored against QP every time he’s played against us for what seems like the past 40 years. That said, the mercurial Stephen Dobbie has moved on from Palmerston, so that was one less Dumfries icon to worry about. Ex-Queen’s Parkers Euan East, deputising at centre half, and Calvin McGrory started for the Doonhamers.

Michael Doyle donned the Spielfuhrer armband and was the subject of some good-natured abuse from the QoS fans; he is, of course, a former QoS player. Spoiler alert – he had the last laugh.

QoS had most of the early pressure with Lee Connelly the guy causing the problems. His influence throughout the first half was a telling factor. He shot against the side netting twice in the first ten minutes and gave both Soames Junior and Todd decent opportunities. That said, nothing really troubled Muir.

Calum Biggar was getting some space early on, but Gibson started marshalling him quite closely and that seems to stop that for a while.

Queen’s were persisting with a possession game that seemed to take the heat out of the home side, with Gillespie covering every inch of the midfield. Either side of him, Brown and Moore were providing a bit of flair, with both building on the previous week’s display. Thirteen minutes in, Brown, coming over to support Biggar, nicked the ball off Gibson and showed some excellent close skills, but he was crowded out.

Darren Lyon was perhaps fortunate to get away with a handball but ex-QP man Calvin McGrory meted out the discipline by chasing him and putting him up in the air. The usual handbags stuff was followed by McGrory making a comment after the thing had settled down and getting the yellow that the tackle probably merited.

QP started coming into the game, with some impressive play through the midfield. Still not a lot for Baynham to feed off, but Moore was growing in confidence and had a couple of decent runs. Before that, Joseph took a hopeful dive in the box and the ref didn’t need the assistance of VAR to flash him the yellow card for diving.

Soames Junior, one of these big imposing lads that comes up to Scottish football from the nether reaches of English football, was causing a bit of bother and both Davidson and Morrison had to be on their toes to keep his efforts away from goal.

Moore had another decent run in the 35th minute and was brought down by Nditi; a fair shout for a foul, but ref waved play on.

Down the left, Robson was supporting Biggar and they were combining well, and the former’s nutmeg count rose to three as soon as the 34th minute.

QoS had two great chances as the half came to a close; a low cross from Connelly to Joseph, whose deft touch should have been a little less deft. Then Soames Junior whacked a cross-come-shot across goal, which Robson blocked and cleared.

No score at half time and neither goalie really tested. In the second half, it was your favourites who started to up their game. The midfield really looked like a coherent unit, with Gillespie everywhere, Lyon supporting the defence, and Biggar, Moore and Brown in command. The QoS tactic quickly became the hump up the park.

With QP in the ascendancy, the breakthrough didn’t take too long to come. A cross into the box in the 51st minute was headed clear by Nditi, picked up by Calum Biggar and he had the space, time and composure to line up his shot that went in off the post. Terrific finish and a good one to have as your first senior competitive goal. That it ended up being the winner makes it twice as sweet.

His job was done, and he was replaced by Simon Murray a few minutes later. Queen’s moved to a more pronounced two-man attack, stretching the QoS defence, giving Baynham loads more space. All of a sudden, the big guy was a huge handful.

At the other end, Soames Junior was lapping up the long balls, and Queen’s had to be on their toes to keep tabs on him. He took the ball from Morrison, slipped it to Connelly, but his shot, like so many, was blocked. Even without the experience of Kilday and Grant, the defence, with Davidson partnering Morrison at the heart, carried on the good work of last season. There was a wee scare in the 63rd minute when a shot came off the arm of Doyle, but the referee saw it for what it was, and waved play on.

Brown and Moore were growing in confidence, with the former full of nice wee tricks that were opening up gaps in the QoS armour. We looked like a side full of confidence, soaking up the pressure at the back, and building play through midfield. Murray, a man whose enthusiasm and energy would make a fortune if you could bottle it, was chasing everything and the dreadful games against QoS of last season seemed a lifetime ago.

Lyon took one for the team, bringing down Joseph when we failed to cleared properly but, other than being alert to the ever-present threat of Soames Junior, we were coping well.

We kicked on again in the last ten minutes, using the two men up front to keep QoS busy. This isn’t what happens in modern football; normally teams with a goal of a lead have three goalies and a wall of eight in front of them! We brought on Max Gillies for the hard-working Lyon, playing him wide as part of an enhanced defence, but even he was darting up the wing, causing problems, giving McGrory a difficult one to clear. Connelly could have drawn it level with five minutes to go, but his shot, like so many others, slipped wide.

A great win but, more importantly, a great performance. It’s all too easy to dismiss the League Cup as a glorified pre-season, but not when you win away at a decent side. Then, it’s a very serious competition!

It’s only the first game, but we were good. I saw a tight, cohesive and effective unit in midfield that could really make our season. Brown has beefed up since he was with us as a nipper and is a physical presence for a fairly wee guy. Moore looks a footballer, and we know the merits of Gillespie, who strolled through the game, and Lyon, whose support for the defence and just behind his midfield compadres, was understated but crucial. Biggar was an able replacement for Longridge, showing some nice touches and you can’t argue with the quality of the goal. Up front, Baynham was quiet until Murray came on, and I would love us to play both of them up front. That worked, and worked well.

At the back, the full backs were absolutely superb. I was impressed with Morrison and he linked up well with Davidson in what was a difficult afternoon for them. It ended up that they gave Wullie Muir an easy afternoon.

It’ll be another difficult shift on Wednesday when we face Motherwell at Firhill and I think Wullie Muir might have a bit more to do. Hopefully we’ll have some more of the players at our disposal, so bring it on.

Match photographs by permission of Queen of the South