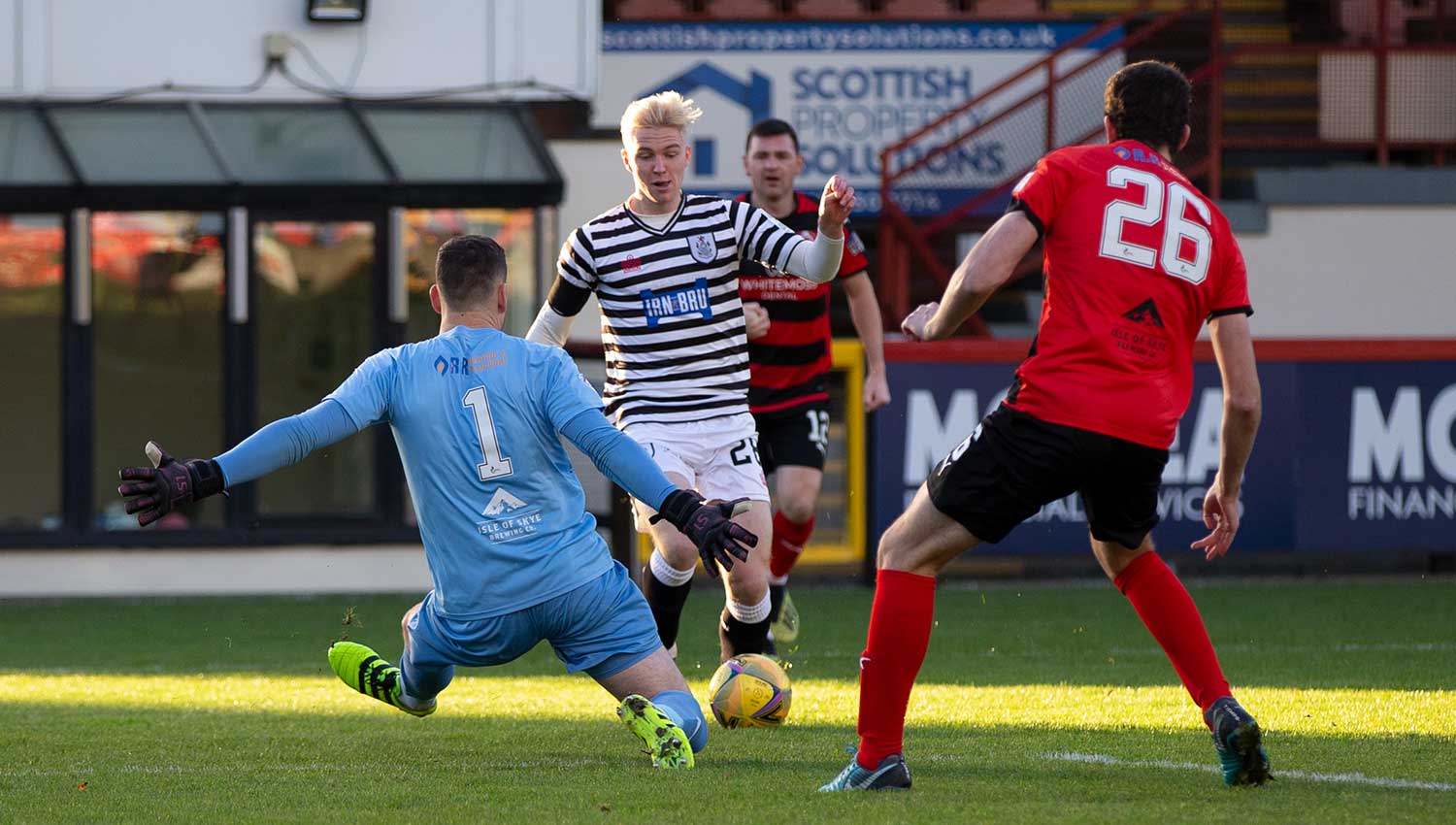 Despite two headers by Queen's coming back off the bar and a missed Clyde penalty in the second half the game neither side could break the deadlock.

Manager Laurie Ellis made two changes as he tried to freshen things up for the visit of Clyde to Firhill – out went Thomson and Moore, to be replaced by Connell and Longstaff. This was the second derby match of the season – the reverse fixture finished 2-2 at Broadwood. Clyde’s main threat is none other than poacher supreme David Goodwillie, who has 73% of Clyde’s league goals this season.

There was a minute’s silence in memory of Honorary Club Patron, Lord Macfarlane, who sadly passed away earlier this week aged 95. Everyone at the club sends their condolences to Lord Macfarlane’s family at this difficult time.

Before the action could get underway, there was a delay of roughly five minutes to kick off as the ground staff at Firhill looked to sort out an on the field issue with the sprinkler system.

Queen’s came firing out the blocks and within a matter of minutes a defence splitting pass by Connell gets Longstaff in down the right, he nutmegs Docherty and his shot is smothered by the on rushing Parry.

Lovely combination play on the 21st minute by Robson and Longridge sees Queen’s get down Clyde’s right-hand side. A couple of the Clyde defenders slip and Robson is in a promising position, but his delivery misses everyone in the middle – chance missed.

A few minutes later, Connell uses his initiative and takes a quick throw in to Longridge whose inviting ball from the by-line drops to Brown at the back stick and he tries to cushion his volley to the bottom left-hand corner, but former Spider Parry makes a brilliant save. It remains 0-0 in an evenly fought contest.

We see our first booking of the match on the 28th minute, with Love receiving a yellow card for a foul on Longstaff.

With ten minutes before half time Longridge beats 2 players down the left yet again, he plays a low ball which falls to McHugh who lays it off to Connell, whose shot is blocked but falls kindly to Longridge in the middle and his shot is blocked behind for a corner. The resulting corner sees Kilday rise highest to meet Connell’s corner into the box, but it sails over the bar.

A matter of minutes later Love hangs a high looping ball to the back post where Goodwillie rises highest and knocks it down to Gomis, who runs onto it and can’t keep his half volley down. Great combination play from the ex-Dundee United players but that really should have been a goal – a big let off for the Spider’s.

The last few minutes of the first half sees a couple of tasty challenges, firstly with Page who is booked for scything down Robson. Longstaff then picks up a yellow card for a late challenge on Ally Love.

Clyde boss Danny Lennon is the first manager to make a change at half time as Jones makes way for Kennedy.

Only a few minutes into the second half sees Gillespie fire a crisp pass into McHugh’s feet, and he swivels his hips before letting off a snapshot which is straight at the keeper and is gathered safely by Parry.

Five minutes into the second half and Longridge’s corner delivery is whipped in with venom and met flushly by Morrison whose header is powered straight against the crossbar from about 6 yards out. Really should have been one nil to the Spiders after a terrific start to the second half.

Ten minutes into the second period sees Goodwillie cut in from the left, loses the ball initially but knicks in before Morrison can clear and is clipped for a penalty to the Bully Wee. Goodwillie steps up too casually and blazes it over the bar – and not for the first time this season, after attempting a “Panenka” in the reverse fixture which also sailed over.

Just after the hour mark substitute Paul Kennedy hit a low rasping shot which Ferrie had to get down well to keep out. Clyde certainly more of an attacking threat since the penalty decision.

Just after the hour mark sees Laurie Ellis make a change, with Longstaff off for Smith.

A matter of minutes later, sees Danny Lennon make yet another change, this time it’s the booked Love off for Livingstone.

With a quarter of the game remaining Queen’s strike the crossbar for the second time , this time Connell’s free kick delivery from the left-hand side of the box and Doyle heads it off the woodwork.

Deveney comes on for the booked Gomis on the 81st minute as the Clyde boss looks to freshen things up further and takes off the veteran midfielder.

With five minutes to go Connell picked out a sublime pass from about 40 yards and ghosting in at the back post was captain Doyle who couldn’t direct his header goal wards.

With a minute to go McHugh held the ball up well, turned and spread the ball out to Longridge who squared up his defender before cutting in and firing a stinging shot that Parry blocked away.

The match sees Queen’s drop points yet again and lose ground at the top of the table, after a stalemate in the local derby with Clyde. Queen’s now drop down to third position in the league and will be looking to end this unwanted record of four games without a win – next up is an away trip to Peterhead next Saturday.