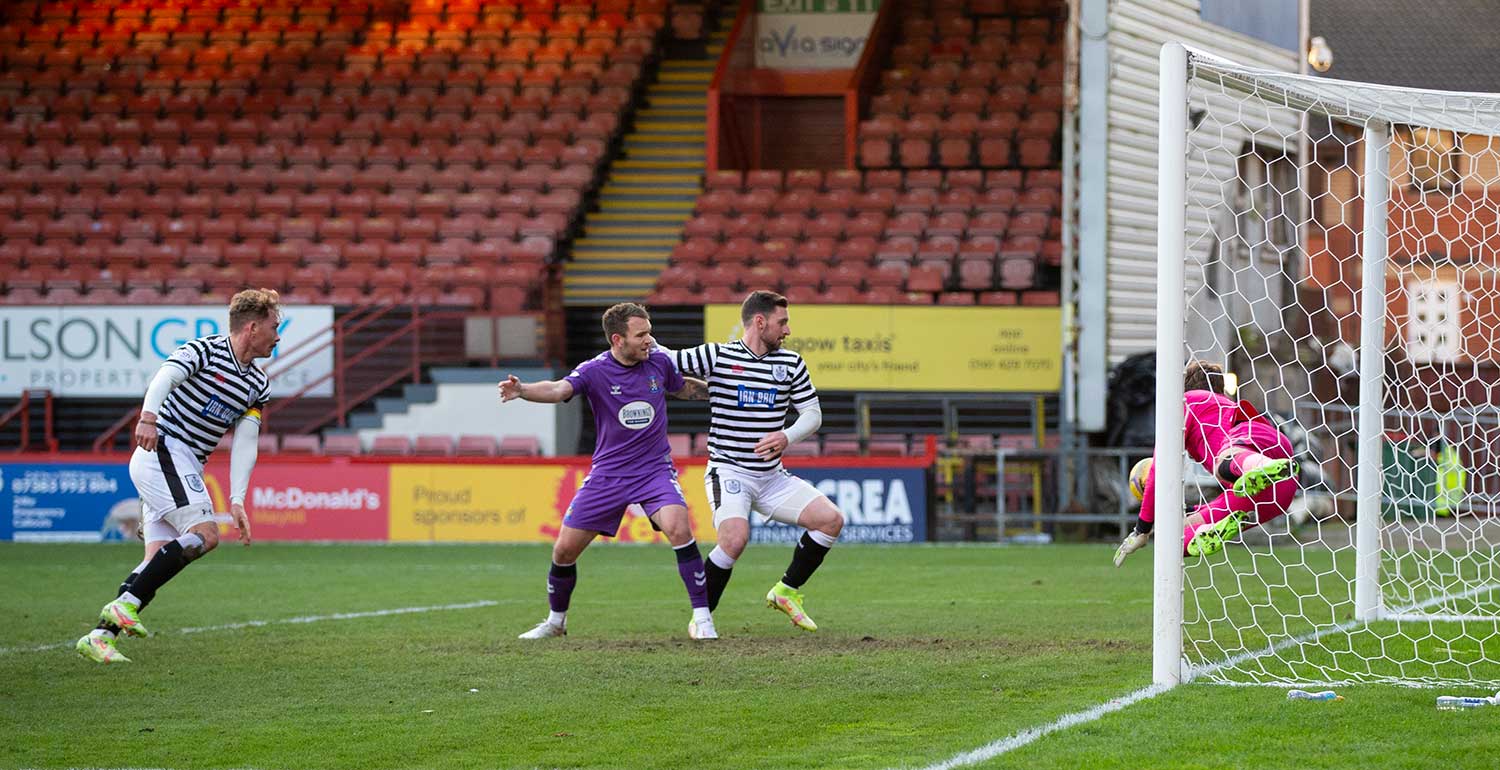 Queen’s Park were knocked out of the Scottish Cup after a late first half header sent the championship leaders Kilmarnock into the 4th round.

Manager Laurie Ellis rang the changes for this Scottish Cup 3rd round tie against Kilmarnock. Out went Longstaff, Kilday and Murray, replaced by Bob McHugh, Connor Smith and Jake Davidson who came in for his 9th appearance of the season.

After a bright start by Queen’s, Kilmarnock showed their quality in the 8th minute. Lyons won a header in the middle of the park after a poor goal kick by Ferrie, the resulting header goes over the Queen’s defence, however Ferrie read it and was off his line early to snuff out the chance for Shaw who was clean through 1 on 1.

Only a matter of minutes later and clever work by McKenzie down the left-hand side when he cut back to Robinson whose point-blank effort was brilliantly saved again by Ferrie who stuck out a strong left hand to deny the championship side the opener.

With 15 minutes on the clock, Bob McHugh did brilliantly to hold up the ball and spin. He then sprayed a lovely pass perfectly into the path of the on rushing Michael Doyle whose cross was eventually cleared but only to Connor Smith, who combined with Luca Connell before placing a left footed shot just past the post – with Walker rooted to the spot.

Just shy of the 20 minute mark and McKenzie breezed past Doyle down the left-hand side before picking out an unmarked Lyons whose first-time side footed effort is straight down the throat of the Queen’s goalkeeper.

Queen’s responded immediately and created their best chance of the game so far. A delivery from the gifted left foot of Luca Connell, his cross is whipped in with pace and Doyle does tremendously to rise highest and powers a header low and hard that was destined for the back of the net, but Walker somehow got a hand to it and Kilmarnock scrambled it clear.

Just on the half hour mark Bob McHugh did well to hold the ball up and play it back to Robson. His ball down the channel took out Hodson and Longridge raced clear before pulling the ball back to the edge of the box where the on rushing Connell set himself however his shot failed to find the target.

With about 10 minutes until halftime the deadlock was nearly broken courtesy of Oli Shaw, who rose above Morrison to plant a header which struck the post before trickling along the goal line striking the other post then bouncing clear.

The deadlock was broken by the visitors right on the stroke of half time. Murray planted a firm header past Ferrie into the bottom corner after a brilliant delivery in from the left-hand side by Polworth.

A half time change for the visitors saw goal scorer Murray being replaced by Sanders. The first chance of the second period came in the 50th minute, with Stuart Morrison nearly scoring a freak own goal by toeing the ball away from the on rushing Shaw who was nearly in on goal but luckily it went wide of a relived Queen’s keeper.

Queen’s attempted to strike back in this end-to-end tussle. Liam Brown crossed the ball in from the left-hand side to McHugh whose shot was deflected but fell straight into the path of Connor Smith, however he dragged his shot a few yards wide.

Head Coach Laurie Ellis made two attacking changes in the hope of trying to get something out of the game, off came Brown and Smith, replaced by Lewis Moore and Luis Longstaff.

With 20 minutes to go there were two chances in a matter of minutes and it’s that man yet again McKenzie, whose two chances are carbon copies of each other as he cuts in from the left-hand side and fires stinging shots at goal, but Ferrie is equal to him and is having a terrific game.

With a quarter of an hour to go, a mix up at the back by Davidson, in his first start since August, puts McKenzie in on goal and he tries to chip Ferrie audaciously from about 25 yards, but once again the Queen’s keeper is equal to it.

With just four minutes remaining Queen’s were reduced to ten men after a heavy challenge from Michael Doyle on Waters. The armband was passed to Louis Longridge for the last few minutes.

The full-time whistle blew and it was the Championship side who squeezed past the valiant efforts of the Spiders as the match finished 1-0 for Kilmarnock. Today’s attendance was 1153, thanks to all the Spiders’ fans and the travelling Kilmarnock supporters for creating a tremendous atmosphere.

Queen’s will be looking forward to a home league game with fellow promotion chasing Falkirk next Saturday at Firhill.