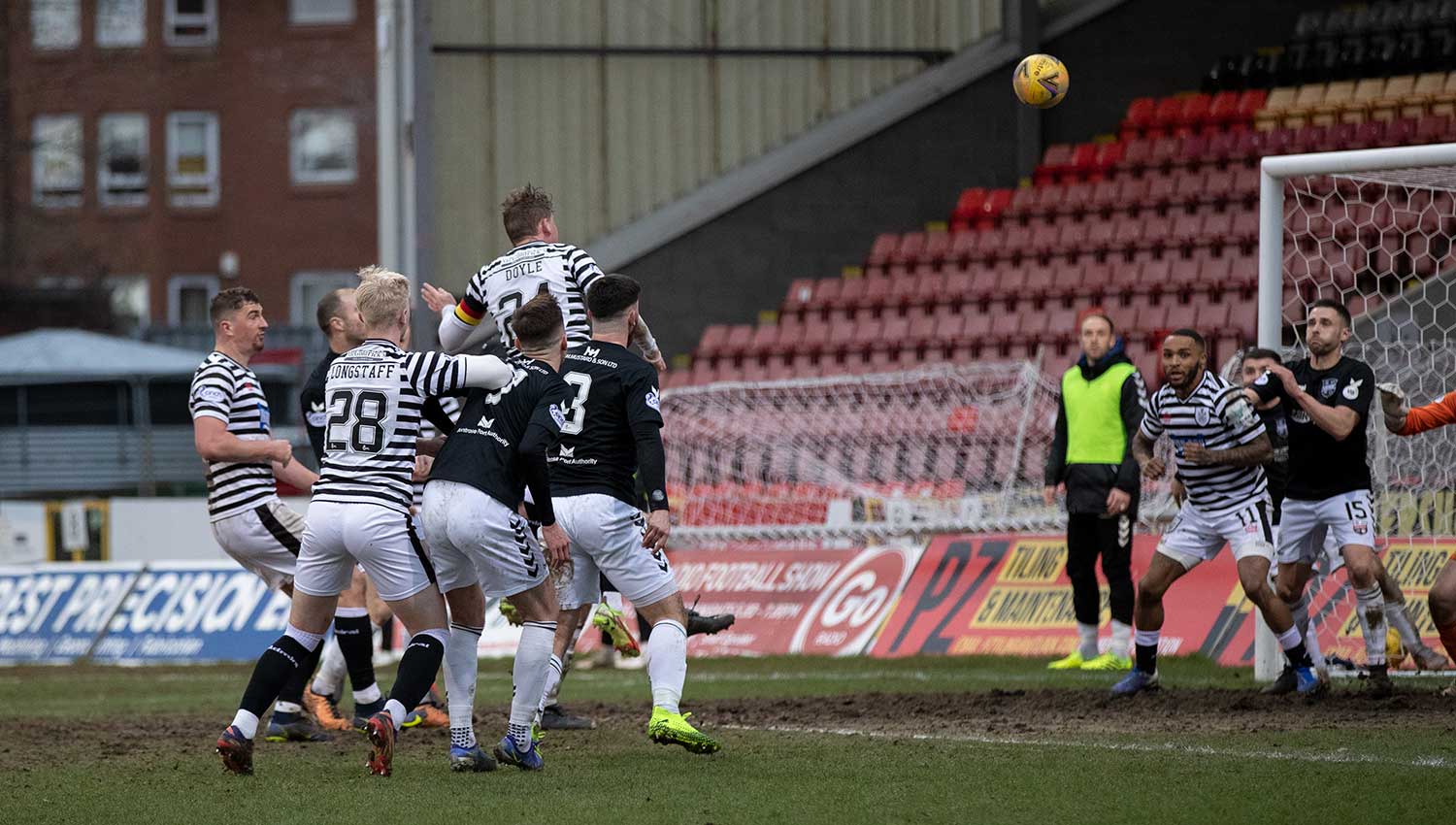 The Spiders fell to defeat at Firhill today against Montrose by a goal to nil in what was a disappointing afternoon for the home side.

4th placed Queen’s Park and 3rd placed Montrose met today for the third time this season. The two previous fixtures between the sides ended 1-1 and both go into this match looking to get three points to boost their respective promotion pushes.

Queen’s Park made one change to the side that drew with East Fife last weekend with Connor McBride coming out of the team, replaced by Luca Connell.

Montrose made three changes to the side that drew with Clyde last weekend with Lewis Milne, Blair Lyons, and Craig Johnstone coming out of the team, replaced by Cammy F Ballantyne, Mark Whatley, and Graham Webster.

After an even start to the 1st half, the first chance of the match fell to Montrose in the 7th minute when a corner kick was cleared by the Spiders, but the ball fell to Terry Masson outside of the box, but his shot went way over the bar.

Two minutes later and it was the home side who had their first chance of the game when Luca Connell’s free kick was cleared by Montrose and the ball fell to Ronan Darcy just outside the box, but his first-time volley went over the bar.

Another set piece by Montrose in the 14th minute saw a free kick from the right by Gardyne met by Quinn but his powerful header went just wide of the post.

Both sides were struggling to create chances from open play with neither side dominating the ball. In the 27th minute, Montrose had another chance when Gardyne’s free kick from the right was met by Graham Webster, but his header was comfortably saved by Calum Ferrie.

Two minutes after Webster’s chance, Lee Kilday had to come off the pitch injured, and was replaced by Peter Grant who was coming onto the pitch to make his first league appearance of the season.

In the 44th minute, Montrose took the lead when Gardyne’s corner from the right was met by Quinn and his header went past Ferrie into the back of the net  – right on half time and the visitors went in a goal up.

The second half got underway, and the Spiders made their second change of the match at half time with Ronan Darcy coming off, replaced by striker Connor McBride in the hope that he would give them more of a goalscoring threat.

The start of the second half was much like the first, with neither side creating many chances. The Spiders perhaps had more of the ball but were struggling to break down Montrose who defended resolutely.

It wasn’t until the 64th minute when Queen’s Park had their first chance of the second half and also their first real chance of the game. Tommy Robson’s driving run down the left led to him arriving at the box but his low shot was well saved by Lennox.

The chance seemed to have brought the home side to life and two minutes later had another chance when Smith managed to break free in the middle of the pitch and his driving run led to him unleashing a right footed shot outside of the box, but it flew narrowly past.

The home side started to make some more attacking changes in the hope that they could get back into the game and it wasn’t until the 78th minute when they had their next chance when Connell’s corner from the left was met by captain Michael Doyle, but his close-range header just went over the bar.

The Spiders were starting to keep a hold of the ball more and nearly scored from a set piece in the 83rd minute when Connell curled a free kick into the back post, but the ball didn’t bend enough, and it just went wide.

This was the last chance of the match for Queen’s Park and the referee blew the whistle to end what was a disappointing afternoon for the Spiders.

Queen’s Park’s next match will be at home on Tuesday to Peterhead.