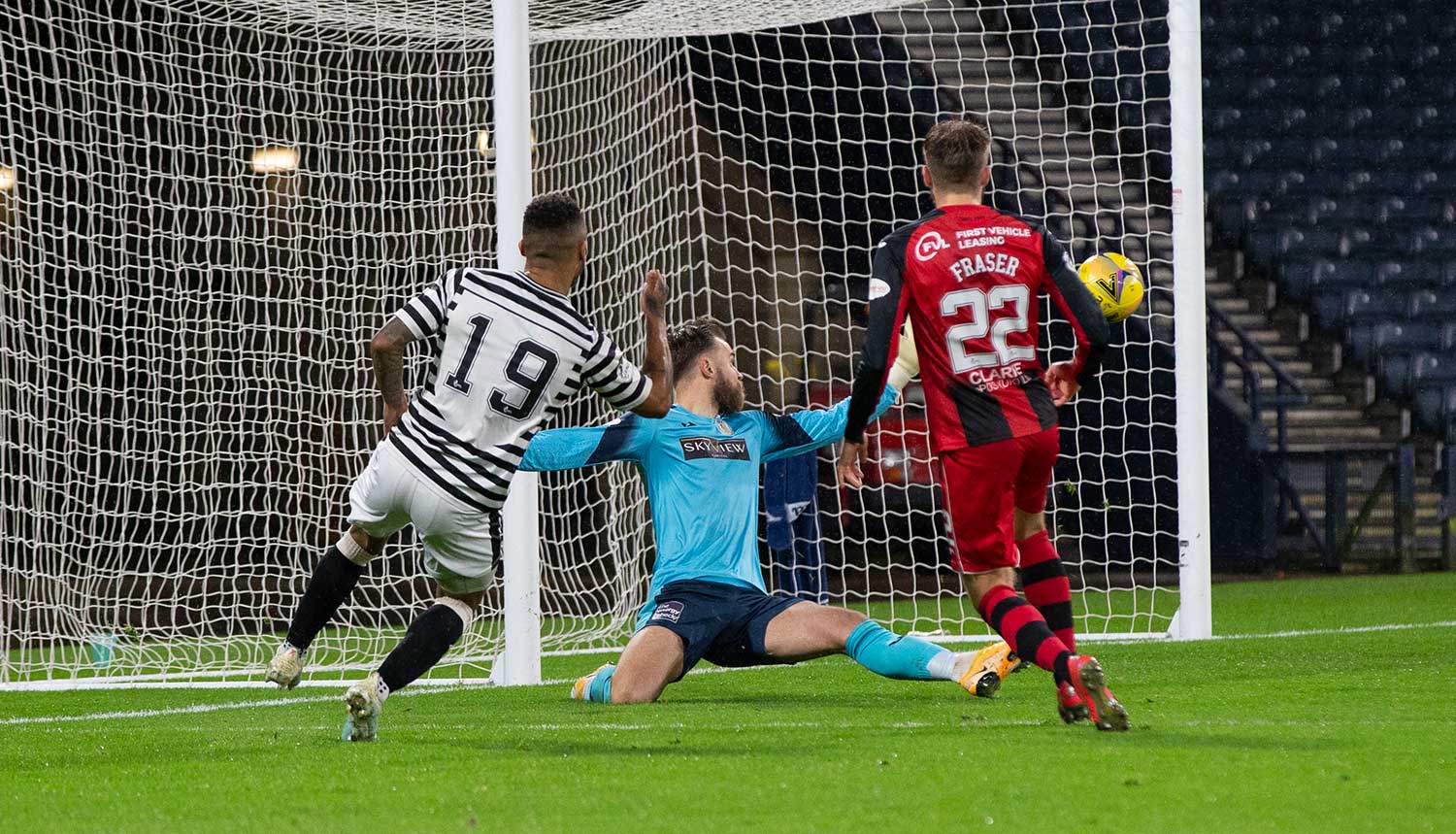 Queen’s Park brought a close to their League Cup campaign as Premier League side St Mirren visited Hampden on a wet Saturday afternoon. The Saints topped the group knowing a win would guarantee progression to the knockout stages. Whereas, the Spiders had nothing to play for, although it was still an opportunity for Ray McKinnon’s men to test themselves against top-level opposition.

The manager opted to make four changes to the side that lost midweek to Queen of the South. In came club captain David Galt, alongside Peter Grant, Tommy Robson and Bob McHugh. Dropping to the bench were Brody Paterson, Grant Gillespie and Jai Quitongo, with Craig Slater missing out altogether after seeming to pick up an injury against the Doonhamers.

Queen’s Park lined up with a changed back three formation and wingbacks. Willie Muir continued in goals following his TV debut the night before – appearing on BBC Scotland’s A View from the Terrace. In front of him were the centre back trio of Stuart Morrison, Lee Kilday and Grant. Deployed on the flanks were Englishman Robson and Michael Doyle, with Irishman Canice Carroll continuing in central midfield alongside Darren Lyon. The front three of Galt, McHugh and Aussie born forward Will Baynham appeared to have the freedom to alternate positions.

Saints gaffer Jim Goodwin also made several changes to the side that secured a bonus point on penalties following a 1-1 draw in the Renfrewshire Derby. Going into the game, the Buddies knew a win would secure top spot in the group. However, if the Spiders were to cause a shock result, there were still a whole host of scenarios that could mean Thistle, Morton or even the South could qualify for the next round.

The two teams entered the Hampden turf to the tune of Yes Sir, I Can Boogie. A tribute to the national side’s celebrations on Thursday evening. After an emotionally draining penalty shootout victory over Serbia, Scotland had finally secured qualification to a major tournament for the first time in 22 years! The feel-good factor appears to have gripped the nation.

Referee Greg Aitken blew his whistle to begin the game and Queen’s were straight on the attack. Galt played the ball forward into the feet of Baynham and he, in turn, passed inside to McHugh. The striker – determined to score his first goal in Queen’s colours – shaped to curl his shot from the edge of the area, but Saints ‘keeper Jak Alnwick did well to parry to ex-Morton man’s effort clear.

With twelve minutes played, it was the Spiders in the ascendancy again. Carroll chipped a ball into McHugh who chested it down into the path of Galt. The captain took a touch to set himself and whipped an attempt at goal. Despite his strike bouncing off the wet surface, Alnwick held onto the ball.

With twenty minutes on the clock, the Premier League side threatened for the first time. Marcus Fraser strode out of defence and crossed into the box towards Kristian Dennis. The forward tried to direct his header at goal, but it narrowly went wide of Muir’s far post.

The game was starting to open up. McHugh had another effort from distance, but Alnwick saved his effort comfortably before the Buddies went on the attack down the right. Wingback Richard Tait invited Fraser forward again as he advanced to the by-line. He clipped a ball back to Cammy MacPherson around the penalty spot, but he smashed his half-volley high over the bar.

It was MacPherson with another couple of efforts at goal for the Saints. First, the young midfielder saw his low freekick saved by Muir, followed by another crack at goal minutes later. His firmly hit shot at goal skipped up off the surface before being parried wide by Muir, although the assistant referee had already flagged a Saints player for offside in the build-up.

The visitors had the final chance of the half as the Queen’s defence could only clear a corner to the edge of the area. The impressive Jake Doyle-Hayes met the ball sweetly, and the ball appeared to be flying towards the goal, but Lyon threw himself across to bravely block the young Irishman’s strike as the sides went in level at the half-time interval.

Five minutes into the second half and the Queen’s Park players were irate with a foul by St Mirren captain Joe Shaughnessy. Doyle went up for an aerial challenge around the half-way line, but the Saints player appeared to lead with an arm which caught the Spiders wingback. Referee Aitken had little hesitation before brandishing Shaughnessy with a straight red card.

A few minutes later, and the home side looked to take advantage of the situation. A deep freekick was lofted into the box by the recovered Doyle. Grant won his header and directed it back across goal in the direction of McHugh. However, the frontman could not get much power on his header at goal and Alnwick gathered with ease.

Shortly after Saints gaffer introduced their top scorer Jonathan Obika from the bench, as he went up top with the Buddies adjusting to two banks of four across the midfield and defence.

Head coach McKinnon then made his first changes of the game: the speedy MacLean and Quitongo were brought on to the right and left side of attack replacing Galt and Baynham.

Queen’s went in search for the first goal of the game, and it was the introduction of Quitongo that seemed to give the Spiders an additional spark. Robson fed the ball down the left for the enthusiastic Quitongo to chase. He burst past Saints centre-back Fraser and into the area, but from a tight angle saw his shot flash across the face of the goal.

McKinnon again turned to his bench in search of breaking down the ten men of St Mirren. Midfielders Gillespie and Biggar replaced Lyon and centre-back Kilday. The changes saw the Spiders revert to a back four with the youngster Biggar playing just behind McHugh in an advanced midfield role.

However, it was the ten men that threatened next. A ball forward from Fraser found Saints substitute Kyle McAllister free in the box. He had ghosted in unmarked and was one-on-one with the ‘keeper, but Muir was alert to save his low strike with his feet superbly.

With around ten minutes to go, the Buddies won a corner. McAllister flighted a tempting delivery into the six-yard area. Both Obika and Grant challenged for the ball, but it was the strong Saints striker leapt highest and powered a downwards header past Muir and into the net to give the visitors a crucial lead.

Straight after the goal, McKinnon threw on McGlinchey for McHugh in search of an equaliser. Although, the Spiders failed to create any late opportunities and ended their League Cup campaign with another defeat.

Post-match, Ray McKinnon praised his players for adapting brilliantly to a change of shape in an encouraging first-half performance. He also felt disappointed and frustrated not to have got a result, but he viewed that as a positive sign that a League Two club can feel that way after playing against Premier League opposition. Next up, the Spiders return to league action as they welcome Brechin City to Hampden Park.