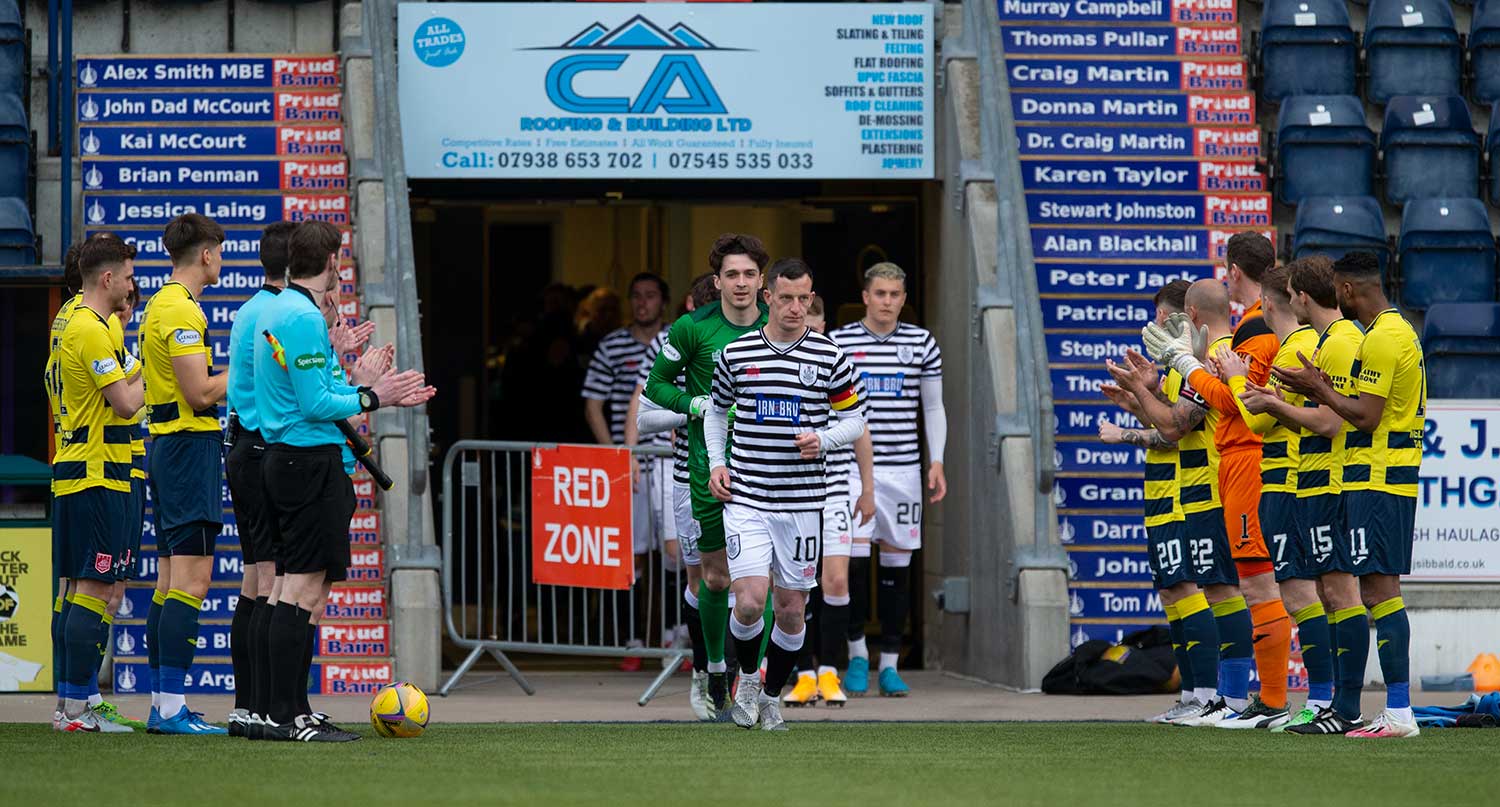 The Spiders – who were crowned League Two champions on Tuesday – never got started as they slumped to a first defeat of the campaign.

Matt Yates was the matchwinner for the visitors as he capitalised on a Stuart Morrison mistake midway through the first half.

The defender played a short back-pass to Jacques Heraghty, who was just on the park after replacing the injured Ryan Mullen on his Queen’s Park debut, and Yates raced in and rounded the youngster before rolling the ball towards goal.

Morrison looked to have got back and rescued the situation but his momentum took him beyond the ball as it agonisingly rolled beyond the stopper and over the line.

The Spiders came within inches of rescuing a point late on – which in truth would have been harsh on the visitors – but Morrison’s header from close-range crashed off the under side of the bar following a corner from sub Luca Connell.

There was late drama when Joao Victoria was sent-off after what look like handbags with Ross MacLean.

The attacker pushed the Queen’s Park wideman in the back and as he approached the former Spider he appeared to lift his hand without making any real contact but referee Barry Cook sent him packing.

The visitors looked the most dangerous throughout the contest and were inches away from opening the scoring inside the first five minutes.

A superb strike from Ruari Paton smashed off the crossbar with Mullen routed to the spot.

Five minutes later the Celtic loanee was called into action as he produced a stunning close-range save to deny Victoria after a superb Stranraer move.

Ray McKinnon’s side, much-changed from the midweek draw with Elgin City – were struggling to stamp their authority on the match with visiting keeper Greg Fleming quiet throughout.

Will Baynham’s header in added-time in the first half was as good as it got for the champions.

Three minutes into the second period and Yates – who was a constant threat – nearly doubled his tally for the night after his looping cross came off the top of the crossbar.

Keeper Heraghty expected the ball to drop over the bar and was caught surprised as it hit the woodwork and bounced clear.

Ten minutes into the second half McKinnon made a triple-change to try and change things but much like the first half the Spiders were struggling to create any clear-cut opportunities.

With 80 minutes on the clock the table toppers came close to snatching a equaliser through Morrison but his header smacked the woodwork before bouncing clear.

Two minutes later Connell sent in another dangerous set-piece but the visitors did well to turn the ball away as they looked to win a huge three points in their promotion bid and end Queen’s Park hopes of an Invincibles league campaign in the process.

Stranraer had two huge chances in the final five minutes to kill the contest. First Tommy Robson did well to block a goal-bound effort before former Spider Victoria was played through one-on-one but he turned back away from goal and allowed Michael Doyle and Morrison to get back in and snuff out the danger.

Moments later Victoria’s game was over as he was given his marching orders following a clash with MacLean.

The incident proved to be the last act at the Falkirk Stadium in a disappointing display from the Spiders.