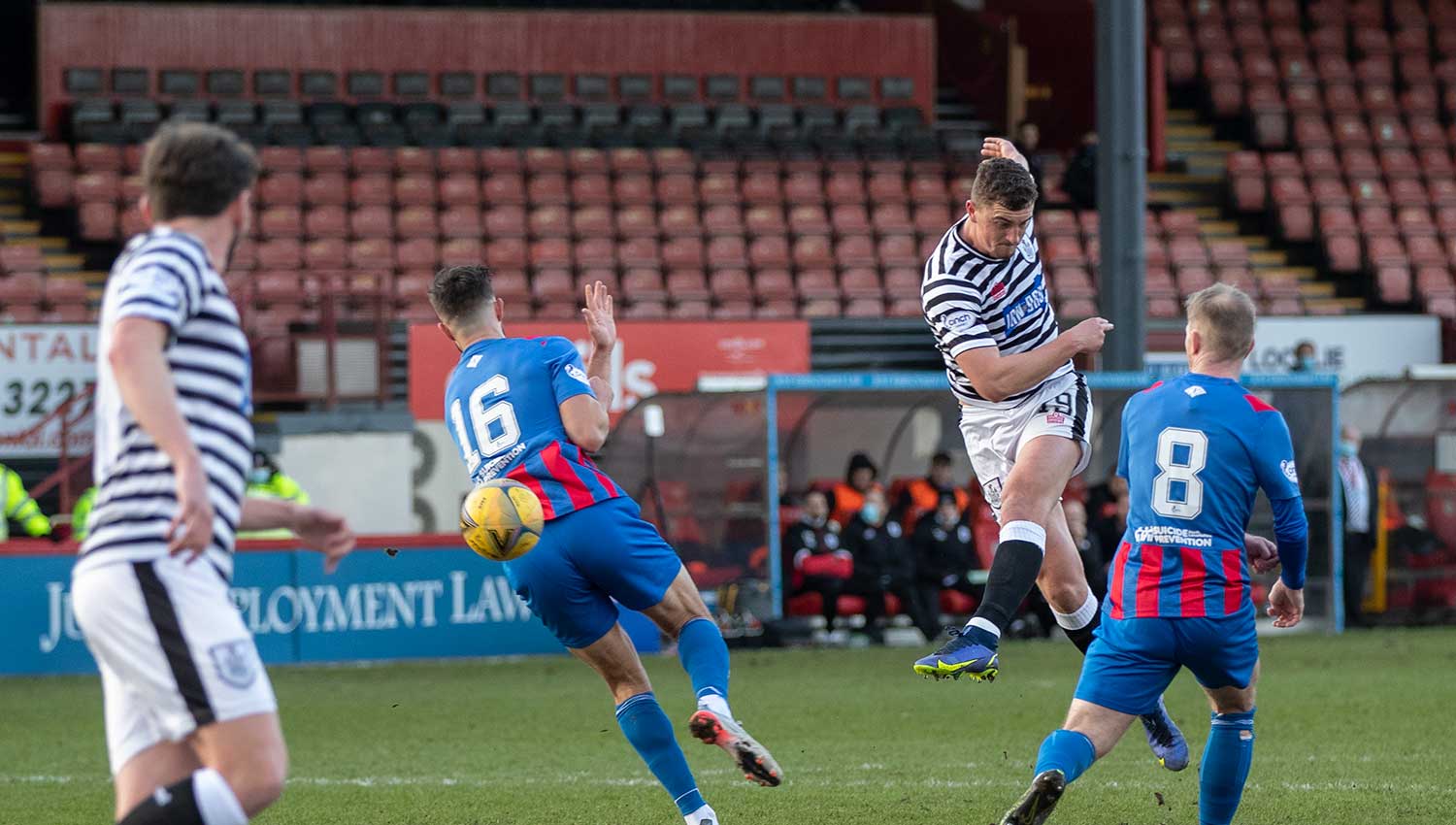 Another frustrating day as Queen’s Park and Airdrie fought out a 1-1 draw at Firhill, our 12th draw of the season

For our long awaited first home game of the year, Caretaker Manager Marijn Beuker made one change to the previous fixture against Clyde. Luis Longstaff was replaced by Louis Longridge as he made a welcome return from injury.

Only a couple of minutes into the game and the visitors nearly took the lead. Scot Agnew whipped in a dangerous ball from a corner on the right-hand side and Bob McHugh breathed a huge sigh of relief as he flicked the ball on, and it bounced off the far post to safety.

The first half chance for the home side came in the 9th minute. Tremendous play down the right-hand side from the lively Liam Brown who shifted the ball past the Airdrie defender before lofting a brilliant cross to the back post. Longridge made a late run into the box however failed to make a clean connection and his shot was comfortably saved by Max Currie in the Airdrie goal.

Just shy of the half hour mark and the breakthrough finally happens courtesy of a wonder strike by Charlie Fox. Luca Connell delivered the ball to the near post from a corner on the left-hand side but misses everyone before falling towards the penalty spot where Fox catches the ball ever so sweetly on the half volley and thunders it into the roof of the net. Unsavable – 1-0 to the Spiders!

An immediate sucker punch is struck by Scott McGill as the away side equalise just a minute later. Great play down the ride hand side by Callum Smith as he gets past his man inside the box before cooly cutting it back to the unmarked McGill who shows great composure and slots the ball past the diving Calum Ferrie in the Queen’s goal. It’s all square here at Firhill.

A big let off for Queen’s on the stroke of half time sees a poor touch from Fox pounced on by Frizzell who squares it unselfishly across to Smith who somehow puts the ball wide from a couple yards out.

Immediately after the restart the lively Callum Smith nearly makes amends for his first half sitter. He plays a one two and spins in behind Lee Kilday and tries to flick it past Ferrie, but the Queen’s keeper is alert to the situation and comes out and smothers the ball.

Just shy of the hour mark and Dylan Easton is tripped by Lee Kilday and a free kick is awarded in a dangerous area. McCabe’s shot for the visitors is saved by Ferrie as the ball is cleared for a corner. Airdrie have a number of corners in quick succession however fail to make anything from them and the game remains tied at one a piece.

Both sides make a change with a half hour to go with Queen’s bringing on Luis Longstaff to replace the returning Louis Longridge. The away side bring off goal scorer Scott McGill and try to freshen things up by bringing on-loan Celtic player, and former Spider, Brody Paterson into the game.

The first booking came in the 64th minute with Dylan Easton cautioned for a foul on Grant Gillespie.

Airdrie again go the substitutes bench to freshen things up further in hopes of changing the game in their favour. Off comes Calum Gallagher, replaced by Jordan Allan.

Queen’s captain Michael Doyle is the next in the book on the 72nd minute after a tussle with Kyle MacDonald off the ball.

The Spiders made a further change in the 82nd minute with Luca Connell replaced by Lewis Moore as Queen’s push for all three points in this evenly fought encounter.

Liam Brown goes into the book a minute later for tugging back an Airdrie player and stopping a counterattack.

A further two substitutions with only 2 minutes remaining sees the homeside go to the bench again this time as Liam Brown and Michael Doyle are replaced by Jake Davidson and Jack Thomson.

A hard-fought contest ended all square. Queen’s defender Charlie Fox was man of the match in what was a game of few chances.

Next up for the Spiders is an away trip next Saturday to Falkirk where they’ll be looking for a repeat of the victory secured earlier in the season at the Falkirk Stadium.

The official Attendance today is 832.