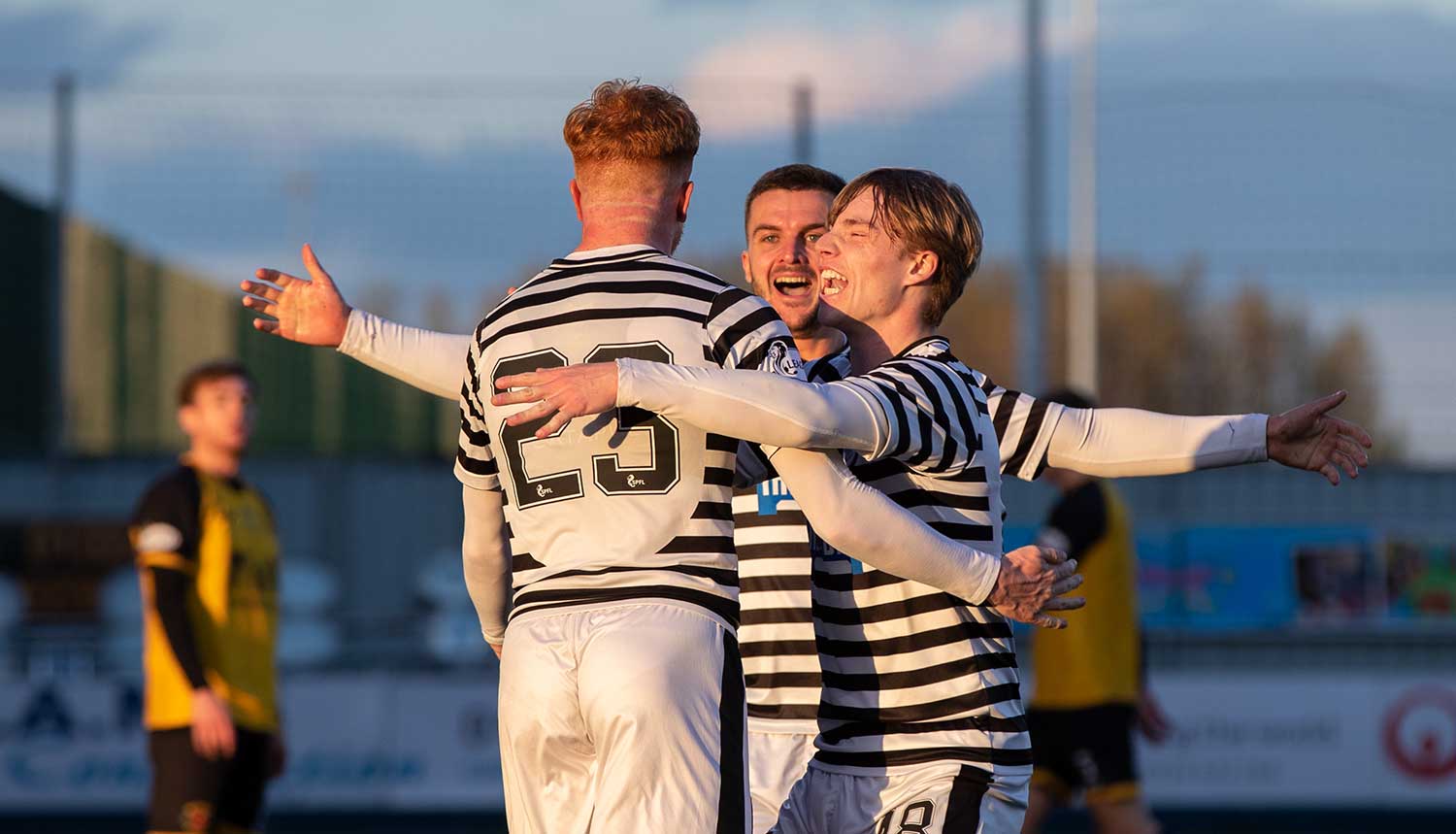 The Queen’s Park Rayvolution tonight welcomed Annan to Fortress Falkirk. The Spiders were looking to extend the remarkable run that sees them one of only two unbeaten sides in British senior league football (Rangers being the other) – and has also taken them to within touching distance of a first league title since Cowboy’s Champions did the business in 1999-2000.

Queen’s last tasted defeat in a league game away back in February 2020, and while the pandemic has wreaked all sorts of havoc with fixtures, there’s no denying that Ray McKinnon’s men have been the standout side in the lower leagues since the action resumed.

They went into tonight’s game on the back of eight successive league victories – and were yet to lose a goal at their new home.

The visitors arrived struggling at the wrong end of the table, with only Brechin City below them. Their last league victory came away back last November when they beat Stenhousemuir 2-1. So surely a home banker then …

With the games coming thick and fast just now, Queen’s were able to shuffle the pack for tonight’s game. Grant missed out after his sending off on Saturday, with Morrison deputising; Robson returned in place of Paterson; Carroll took over from Gillespie; Connell replaced Lyon – and Kouider-Aissa came in for McHugh. The fact that the boss was able to make so many changes without weakening the side in any way spoke volumes for the depth of the squad.

Grant’s absence meant the armband passed to keeper Willie Muir – a fitting way to mark his 198th appearance between the sticks for Queen’s.

The Spiders started brightly and earned a corner in the opening minute. Connell’s delivery was a belter but was scrambled behind before anyone in Hoops could pounce. The second corner was cleared in more orthodox fashion.

Quitongo had a couple of chances to show his blistering pace early on, but while he left Lowdon in his wake, his final delivery couldn’t unlock the Annan defence.

Salim was booked after eight minutes for a tug on Smith.

The resultant free kick caused momentary alarm in the QP box, but the ball was finally cleared.

The Spiders striker could have made the right type of headlines moments later when a poor clearance from Kinnear was intercepted by Longridge. He crossed for Salim, but his first-time effort flew the wrong side of the post.

Annan had their best chance when Hunter went close with a long-range effort after a mistake in the Queen’s rearguard.

Quitongo sparked another bright attack for the home side after 16 minutes and when his driven cross reached Connell, the young loanee let fly and Kinnear had to be at his best to turn the shot behind for what proved to be a fruitless corner.

Murray had a header saved by the keeper as Queen’s continued to probe, but the first quarter of the game came and went without troubling the scorers.

Annan were playing the ball about nicely without threatening too much, although Muir had to be quick off his line to race out the box and head clear as Moxon looked to create an opening.

Morrison was the next home player to have a sniff from a corner, but his header went narrowly wide.

Anderson was looking a threat and the offside flag denied him after 30 minutes.

Queen’s were looking a bit disjointed as the half wore on, but with Quitongo and Murray up front, there was always the chance of something arriving out of nothing.

And that’s exactly what happened after 40 minutes. Quitongo used all his strength to wriggle clear on the right and fire over a deep cross. Salim headed it back into the danger area and Simon Murray pounced to head Queen’s into the lead.

It was the last noteworthy moment of a first half which ended with the scoreline:

Neither side made any changes at the break and Queen’s started on the front foot. An early corner came to nothing, but the home side looked comfy with the goal advantage.

Lowdon went in the book after 55 minutes for a foul on Quitongo. You had some sympathy for the defender as the wee man is just about unplayable in this mood.

On the hour mark, the home side won four corners in quick succession. The last one was finally scrambled clear.

Christie was replaced by Flanagan as Annan made the game’s first substitution.

Morrison did well to block a Moxon shot as the visitors tried to get back on terms. A long throw from Douglas then led to a big penalty appeal for hand ball, but referee MacDermid was having none of it.

Connell (yes, wee Luca Connell) rose highest to nod a dangerous Robson cross narrowly over the top, but like the first half, the game was becoming a bit scrappy.

Galt made his first impression as we entered the last 20 minutes, skinning Sinnamon and letting fly with his left peg. Kinnear reacted well to keep the deflected shot out.

Doyle just did enough to deflect away a dangerous cross and Muir then grabbed the corner to ease any nerves. Kilday took a knock as the keeper came to claim the ball. He took a while to recover but managed to get back to his feet.

Watson came on for Fleming after 76 minutes. Connell was then replaced by Lyon, before Smith made way for Currie.

Quitongo’s night ended in horrible fashion with eight minutes remaining when he fell awkwardly after turning Lowdon yet again.  It was a sad sight to see him leave the field on a stretcher. Every care was taken to avoid any further damage, with the Annan physio lending his support.

MacLean and Gillespie replaced Quitongo and Carroll when play resumed.

Murray set up Galt for a shot, but Kinnear was up to the task. Then as the clock went past the 90, MacLean teed up his fellow sub, but Davie couldn’t hit the target.

Annan were still chasing a point and earned a corner which was easily cleared by the home defence.

Deep into the time added for Quitongo’s injury, another long throw from Douglas looked certain to produce an equalizer, but Morrison stretched superbly to nick the ball off the toes of sub Currie.

MacLean then broke superbly and lobbed keeper Kinnear … only to see the ball bounce off the top of the bar.

Finally, it was all over, and the Spiders had secured another priceless three points in their quest for the title.

Results elsewhere went the way of McKinnon’s men, and with nearest rivals Edinburgh City the opposition on Saturday, victory in that High Noon showdown would leave the Spiders just one point from being crowned champions.