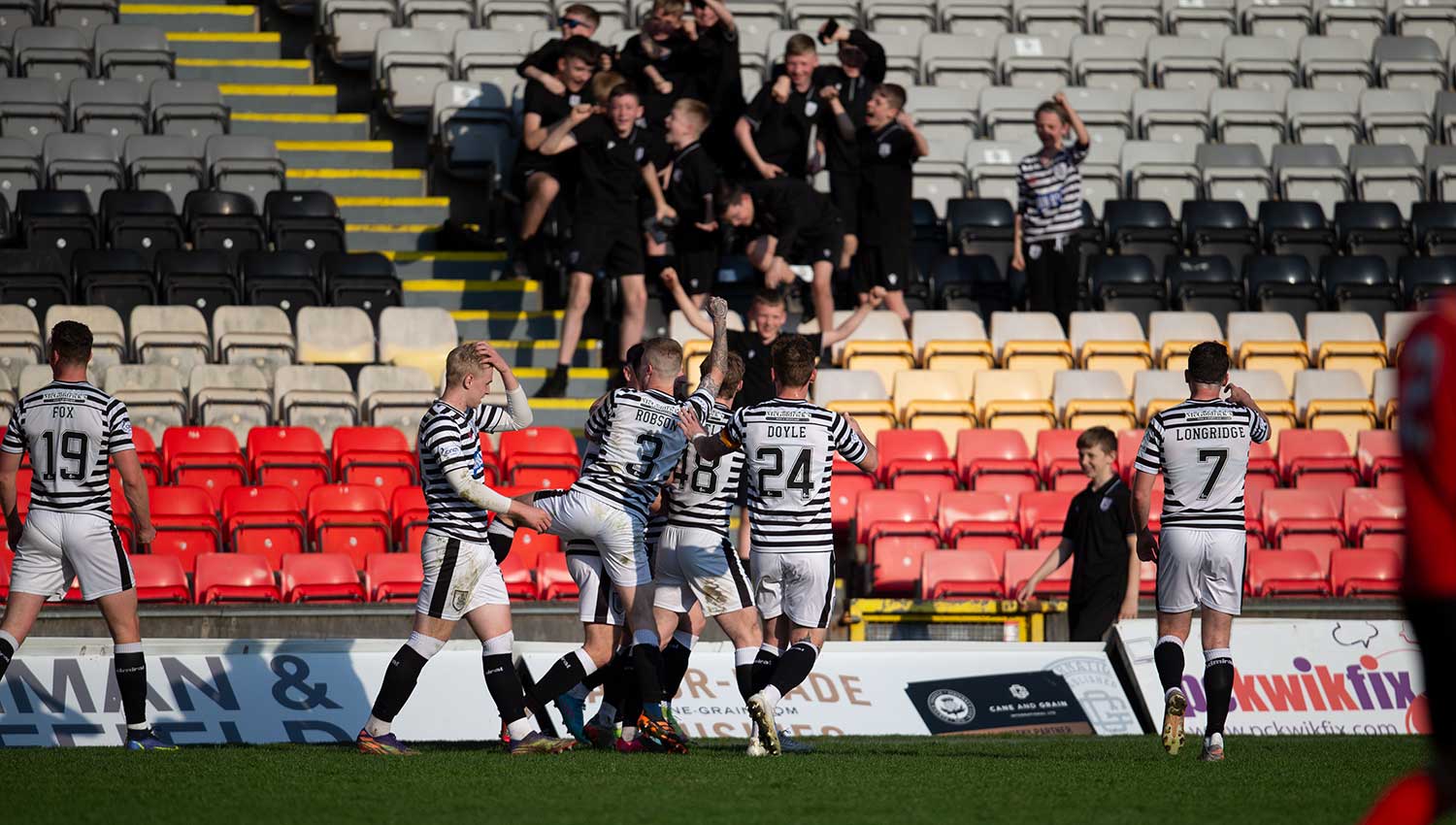 Queen’s made three changes from the defeat last time out against Airdrie. Out went young Cameron Bruce, Ronan Darcy and Connor Smith and they were replaced by Darren Lyon, Tommy Robson, and Connor McBride. Cameron and Connor were unavailable today after being called into the Scotland 17s and 21s squads, respectively – congratulations to both. Queen’s Park also welcomed new head coach Owen Coyle, as he watched his new side for the first time.

With just 60 seconds on the clock the home side show a good sign of intent as Luca Connell flicked on a long throw down the right-hand side. Bob McHugh retrieved it in the corner before he faked to go back on his left, but he played a tremendous cross for Connor McBride who had ghosted in at the near post, but his flicked volley sailed just over.

In the 7th minute, Liam Brown produced an outrageous ball over the top for the on-rushing McHugh who let the ball bounce from the right-hand side of the box and was unlucky to see his shot smack the post before being cleared – terrific stuff from the Spiders.

On the 13th minute captain Michael Doyle swivelled and on the half-volley tried to guide his effort into the top corner but Bradley-Hurst was equal to it and somehow tipped it onto the crossbar.

Just after the 20-minute mark Luca Connell flicked the ball on with his head perfectly into the path of Connor McBride and he had a glorious chance to open the scoring. The visitor’s keeper rushed from his line and McBride lobbed the ball over him but unfortunately a few inches too high.

Liam Brown is replaced by Luis Longstaff on the 34th minute as he failed to recover from an earlier challenge from Kevin Nicoll and hobbled off. Let’s hope it’s nothing too serious and he makes a speedy recovery.

Clyde’s first real attempt on goal came on the 38th minute courtesy of club captain Ally Love as he tried a very audacious attempt direct from a set piece. He has a free kick from about 30/35 yards from goal to the right-hand side but his in swinging effort flew a few yards wide of Ferrie’s left-hand post.

A minute before half time saw Nicoll with a poor tackle on Tommy Robson – some might say Nicoll was fortunate to only receive a yellow card.

Half time and it remains a stalemate. It has been a decent first half showing from the Spiders who were millimetres from another goal of the season contender, this time from Bob McHugh.

Half time substitution for the away side as Gregory Tade replaced Nicholas McAllister as they look for a different approach up top to try and get a foothold in the game.

The deadlock is finally broken by Bob McHugh who is now the club’s top goal scorer this season with his 7th league goal. A minute shy of the hour mark, saw Connell whip in a delightful ball from the right-hand side which saw Bradley-Hurst collide with a defender and the loose ball broke to McHugh who was in the right place at the right time as he tapped home. 1-0 to the Spiders.

Another substitution on the 66th minute for the home side as Connor McBride is replaced by Jai Quitongo. Almost an immediate impact after less than a minute on the park as Jai nearly doubles Queen’s Park’s lead. He retrieved a long ball in the opposition box before he turned his man inside out and saw his effort on goal trickle agonisingly wide of the post.

Peter Grant picked up a second yellow card on the 75th minute and saw red as he tugged Lewis Jamieson back on the edge of the box – the Queen’s defender can have no complaints. Shortly after Grant departed, Louis Longridge made way for Jake Davidson as Queen’s look to shore up the defensive line.

With 10 minutes to go, it’s the 10 men of Queen’s Park who look more likely to add to their lead. Quitongo has been very lively since he came on and had a chance on the right-hand side of the box which Bradley-Hurst was equal to as he stuck out a right boot to divert it clear. Goal scorer McHugh nearly added to his goal tally as his curling effort was destined for the top corner, but the keeper is equal to it and caught it. Quitongo then had another chance less than a minute later as he latched onto a flick by McHugh, he drove at his man on the outside and saw his left footed effort go underneath the goalkeeper but drift narrowly wide.

A battling performance from Queen’s Park as they hold onto a 1-0 lead to claim all three points. Next up for the Spiders is another home match next Sunday to league leaders Cove Rangers.

The official attendance at Firhill is 896. A fantastic turnout during international week to witness the derby match between Queen’s Park and Clyde.