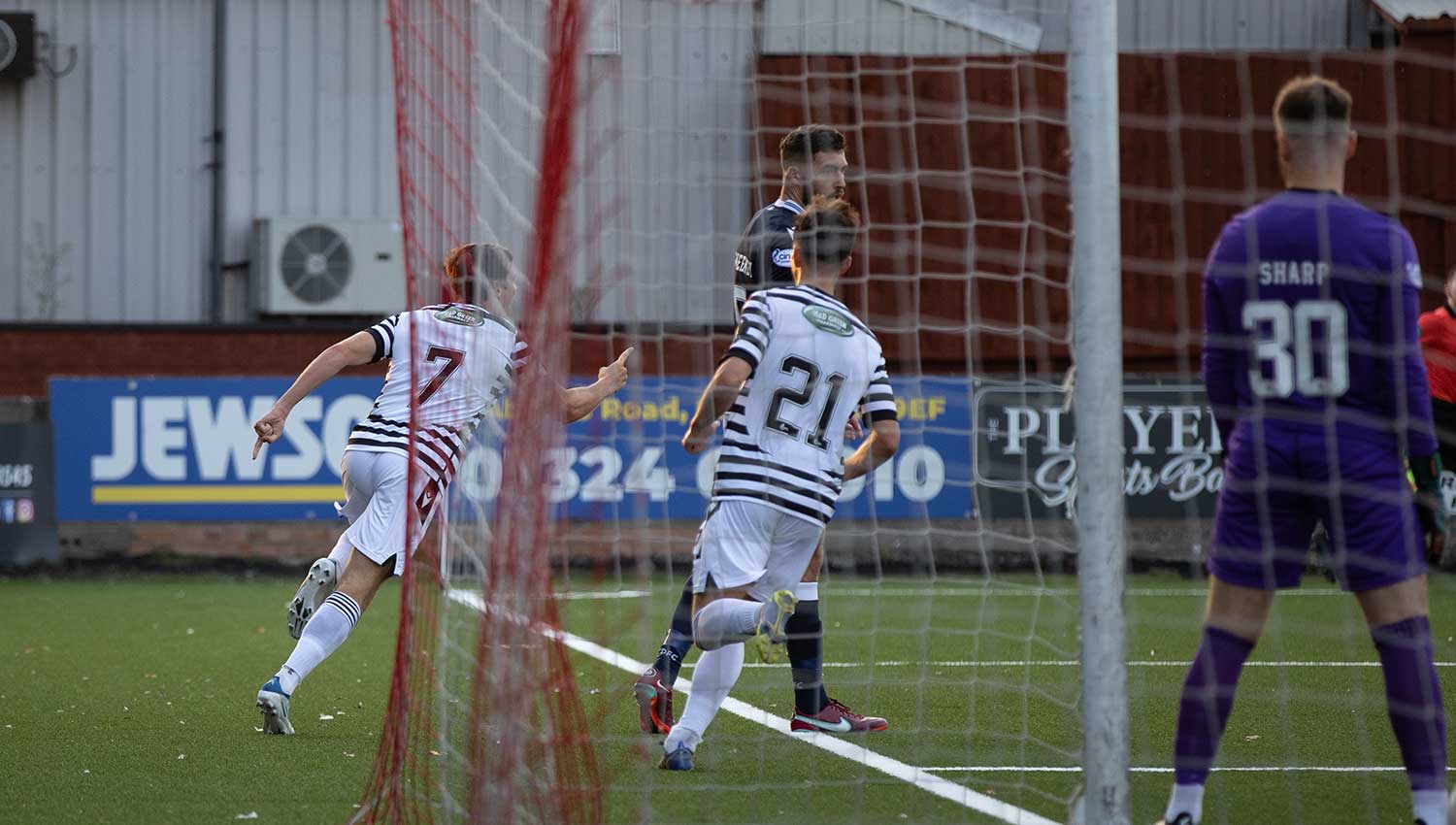 Top spot was up for grabs as Queen’s Park hosted Championship rivals Dundee in their third Premier Sports Cup Group H game and there were chances aplenty as The Dark Blues won 2-1 despite a strong second half performance from the Spiders.

Head Coach Owen Coyle made one change to the line-up that saw off Forfar 4-1 a week ago with Louis Longridge moving to the bench and Patrick Jarrett given the nod to start.

Dundee, who were beaten by Queen’s a decade ago in this competition, earned a corner in the opening 60 seconds with Niall McGinn’s dead ball flashing across the home goal.

McGinn whipped in another dangerous cross on four minutes with Lee Kilday rising to clear and the hosts’ responded with a fine move involving Dom Thomas and Grant Savoury which resulted in Tommy Robson being released on the left. His low cross was dummied by Simon Murray and after Dundee had only partially cleared Jack Thomson sent a 25-yarder bouncing wide.

Shortly afterwards Jarrett chipped over and then Thomas intercepted a pass he picked out Thomson who teed up Savoury however his drive went high over.

Dundee looked to have taken the lead on 15 minutes when McGinn picked out Ryan Sweeney at the back post. The Dark Blues skipper nodded goalward however former Dundee shot-stopper Calum Ferrie produced a wonder save to keep the ball out with the help of the woodwork.

Ferrie then saved a bouncing 18 yard shot from Max Anderson before Queen’s carved out a chance which Savoury mis-kicked and when the ball landed at Murray’s feet he did likewise.

On 19 minutes Charlie Fox’s superb last gasp tackle on Alex Jakubiak saved a goal after the striker had brushed aside the challenge of Kilday.

The players, and fans, got a chance to contemplate how the game was still goalless midway through the opening half, when referee Willie Collum allowed a water-break

That contemplation did not last long with Dundee opening the scoring on 32 minutes. Ferrie blocked another Anderson drive and the shot-stopper excelled again to keep out Tyler French’s hooked effort. The ball spun into the air and Kilday’s clearing header fell into the path of Jakubiak who nodded in from close range.

Josh Mulligan drove a fierce shot over before Dundee added their second four minutes later when Queen’s were caught napping at a corner when McGinn fed Paul McGowan who clipped a pass into the path of Kerr who lashed a left foot shot home.

Longridge came on for Thomson at the break with the visitors replacing the impressive McGinn and McGowan with Paul McMullan and Ben Williamson and both sides attacked from the off again.

Murray was crowded out just as he was away to pull the trigger and then an offside flag denied Jakubiak a second.

LONGRIDGE showed what he was all about on 52 minutes when he took a pass from Jarrett and skipped past Jordan Marshall and sent a thumping shot high into the net.

Murray got a strong shot away just before the hour mark however it was deflected for a corner with a header from Kilday earning a second flag kick which resulted in a Longridge drive being blocked.

Jake Davidson looked to lob Queen’s level on 67 minutes after Sharp had dropped a cross under pressure, however his effort was blocked.

Another last gasp block by Fox denied Williamson with Ferrie saving from McMullan after a Davidson slip nine minutes from time.

It looked like Savoury had cracked in a late equaliser with a swerving left foot shot however French popped up to head clear.

In the closing stages McMullan had a goal chalked off after cheekily knocking the ball out of Ferrie’s hands with Queen’s almost snatching a second when Lewis Moore slid in, however he was crowded out. 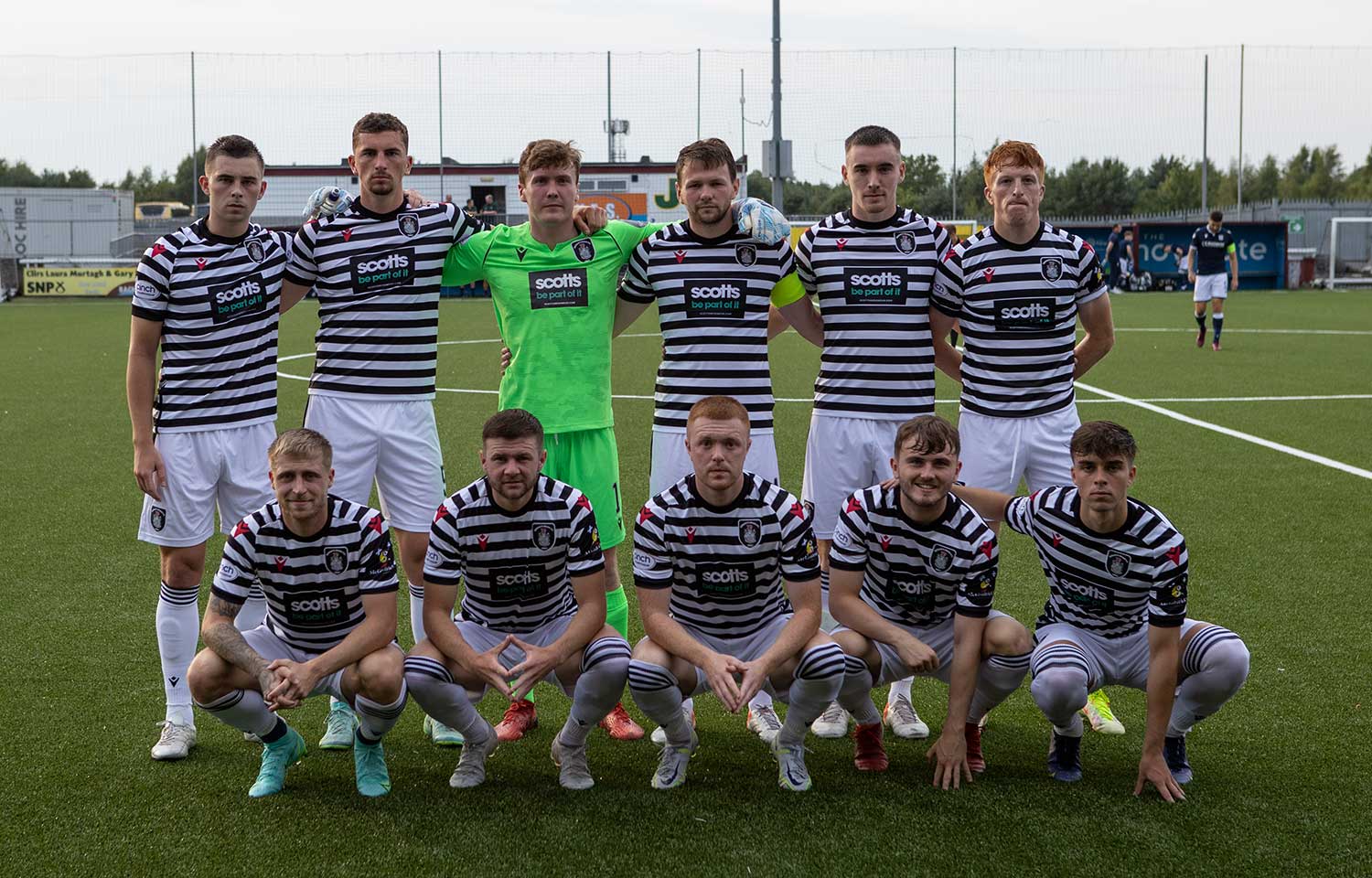