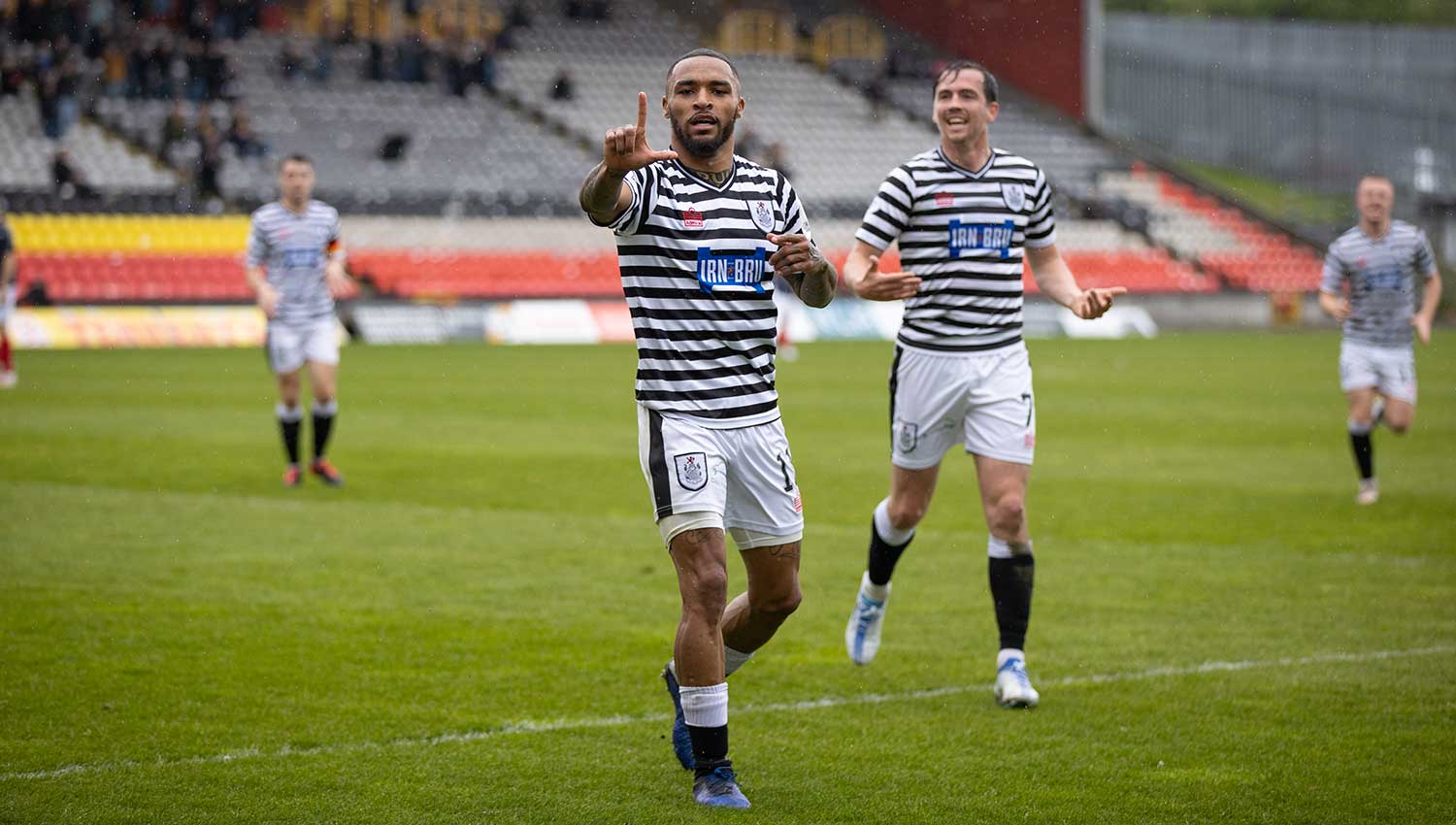 Queen’s were held to a 1-1 draw at home against Falkirk in their last league match of the regular season.

The Spiders made three changes from their last game against Montrose, Connor Smith, Luis Longstaff and Simon Murray dropped out for Louis Longridge, Jai Quitongo and the returning Liam Brown which is timely considering the play-off semi final next week against Dunfermline.

The first half chance of the game came on the 25th minute and fell to the Bairns and what a goal it would have been if it were a few inches lower. Charlie Telfer knocked the ball down and Anton Dowds let the ball drop before unleashing an absolute rocket of a half volley which narrowly flashed over the top.

The breakthrough for the Spiders came on the 29th minute courtesy of Jai Quitongo grabbing his first league goal of the season. It all came from a quick break away from a Falkirk corner, the ball was initially cleared when Quitongo headed the ball through to Luca Connell who was bearing down on goal, he changed back onto his favoured left foot before picking out Quitongo on the edge of the box and he made no mistake by slotting the ball into the bottom left-hand corner. A cultured finish to put the Spiders one up.

Right on the stroke of half time saw Queen’s keeper Calum Ferrie divert Leigh Griffiths’s goal bound effort. It was a free kick in typical Leigh Griffiths territory just right of centre 25 yards out and you’d expect him to go up and over the wall. Instead, he went to the keeper’s right side with Ferrie equal to it, showing terrific reflexes.

1-0 to the Spiders at the break and a thoroughly deserved lead. It was a tense start from both sides but the goal from Quitongo was a fair reflection on the first 45.

A mere 6 minutes later saw goal scorer Jai Quitongo withdrawn with what looked like a slight knock and is replaced by Connor McBride.

Both sides worked hard to gain the upper hand as the second half ebbed and flowed, however neither goal keeper was overly worked.

On the 83rd minute heartbreak for Queen’s as Falkirk equalise late on courtesy of Callum Morrison. Queen’s Park failed to deal with an initial cross into the box and Anton Dowds is the first to the second ball. He laid it off for the on-rushing Morrison who crashed an unsavable shot into the net.

Luca Connell hobbled off the park, leaving the Spiders will play the last 5 minutes plus stoppage time with 10 men.

A match which lacked real quality from both sides apart from two great finishes. A draw is a fair result, but Queen’s will be hoping for a better showing next week when the play offs get underway. Next up is the first leg of the play off semi-final here at Firhill on Wednesday against Championship side Dunfermline, kick off is 7:45pm.

The official attendance at Firhill to witness the last league game of the regular season is 922.