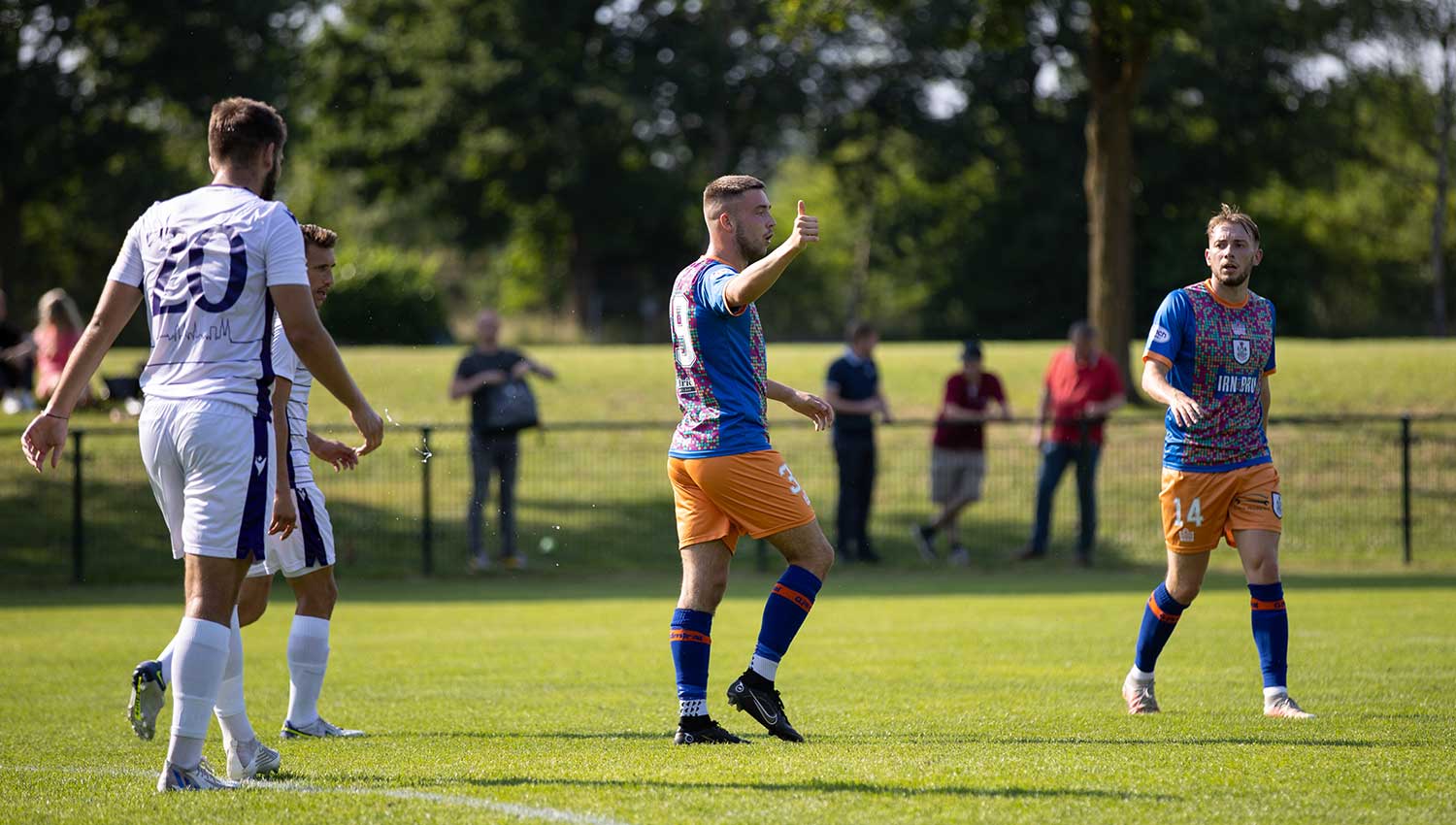 With a cloudless sky and the thermometer hitting 30º it was going to be testing environment for both sides. The format of the match was three periods of 40 minutes so that the coaches of both teams could give minutes to a larger pool of players.

Queen’s started the game brightly with Tommy Robson causing the Croatian side problems with his fast running down the right wing. In the second minute Tommy beat two defenders and delivered a cross that hit the top of the crossbar.

From the clearance NK Lokomotiva showed their pace with a fast break that resulted in a shot that narrowly missed its target.

Queen’s continued to test the Nk Lokomotiva defence with both Grant Savoury on the right and Dom Thomas on the left finding space down the wings.

Twelve minutes into the game Queen’s had their first chance, when a free kick wide right was delivered into the NK Lokomotiva box. The keeper failed to hold the cross. Lee Kilday followed up but his shot was cleared for a corner by a defender on the line.

From the resultant corner Charlie Fox, headed the ball back into the six yard box for Simon Murray to shoot, only for Simon to see his shot blocked by the well organised NK Lokomotiva defence.

NK Lokomotiva were now beginning to assert themselves in the game with some superb passing and moving.

Queen’s continued to push forward, and in the 20th minute Jack Thomson fired in a cracker of a shot after superb lead up play by Grant Savoury down the wing.

In the 30th minute NK Lokomotiva had their first shot on goal which Calum Ferrie calmly dealt with.

A minute later Calum Ferrie had to look sharp to block a NK Lokomotiva shot, after some fine buildup play by the Croatian side.

The first period ended with no goals, but a really good workout for Queen’s against a side that started their pre-season two week before the Glasgow side.

Queen’s, as in the first period, started the second period on the attack. They were awarded a free kick inside the first minute. The free kick was delivered into the NK Lokomotiva box and brought out a fine save by the keeper.

Nine minutes into the second period, Simon Murray played a through ball to Jake Davidson, who shot on goal, only to be denied by the advancing NK Lokomotiva keeper.

NK Lokomotiva soon began to take control of the game. Their ability to switch the ball and turn defence into attack, combined with a high pressing game, was causing Queen’s problems in defence.

Calum Ferrie, as in the first half, pulled off a series of great saves to deny the opposition.

NK Lokomotiva were getting close to scoring with a number of chances that they really should have scored from, but all their shots missed the target.

NK Lokomotiva continued to pile on the pressure and in the 68th minute opened the scoring with a goal from Kačavenda.

Five minutes later they added second when Florucz headed a corner into the net.

In the 78th minute NK Lokomotiva added a third. The ball was switched left to right and Soldo stepped onto the  pass to drive the ball into the net.

Queen’s got their only goal of the game, in the 80th minute, when Scott Williamson rose above the defence to head home, from eight yards out, after a cross from Tommy Robson wide left.

With both side making huge number of substitution the third period became much of a training game with lots of movement, but with neither side having many attempts on goal. The heat of the afternoon was certainly having an effect on the players.

A great test for the young Spiders side against a very strong, experienced and skilful Croatian side who’s play at times was mesmerising with its fluidity and pace.

Next up is a game agains FC Utrecht  on Saturday 2 July, 18:00 kick-off at FC Utrecht Training Ground ‘Zouderbalch’.