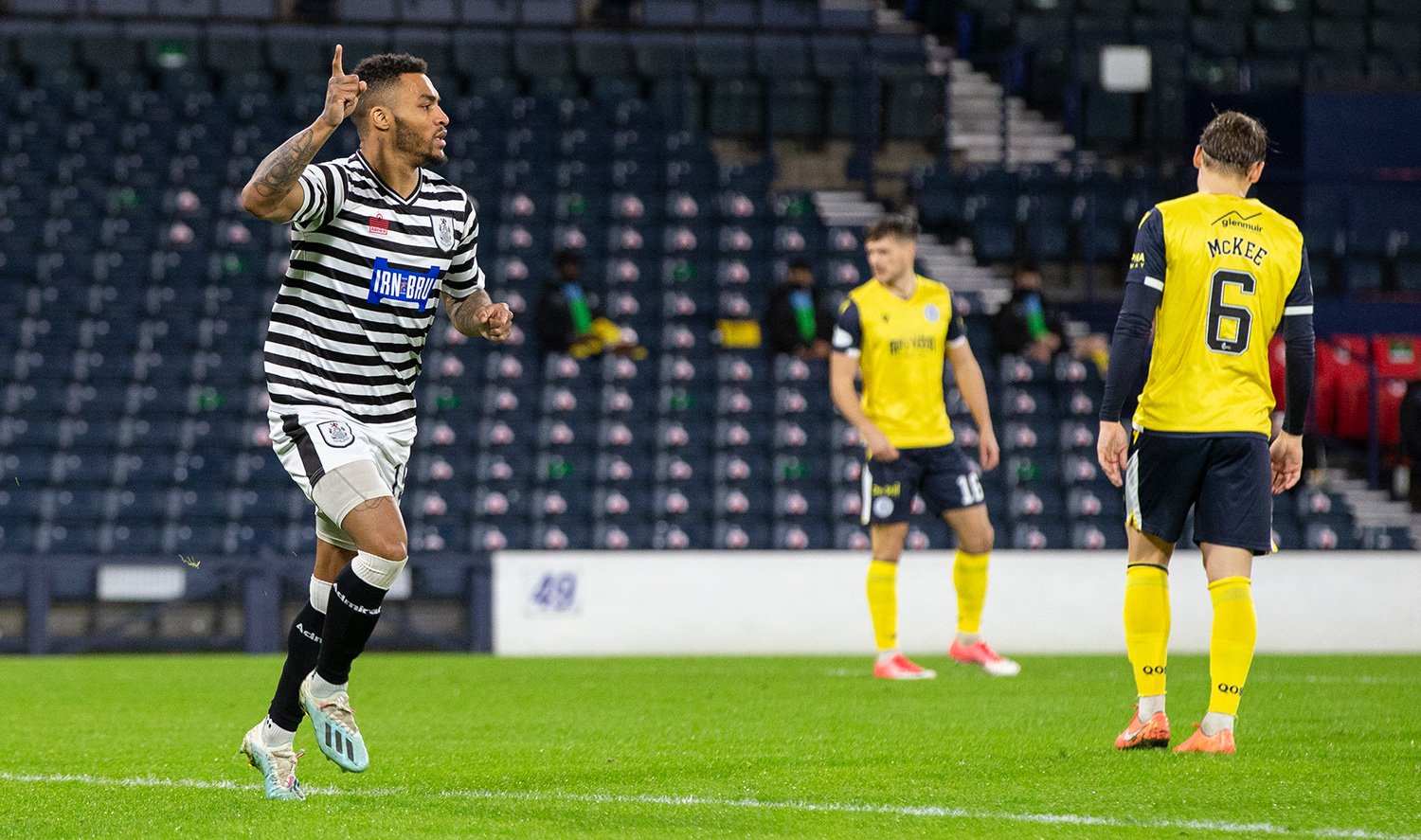 Queen’s Park 1 Queen of the South 3

Queen’s Park returned to League Cup action and welcomed Championship side Queen of the South to Hampden Park. Following on from last Saturday’s hard-fought victory at Borough Briggs it was a quick turnaround for the Spiders.

After opening the group stages with two defeats away to Partick Thistle and Greenock Morton in October, progression was already unattainable for Queen’s. With that in mind, and with more options now at his disposal, head coach Ray McKinnon made six changes to the starting line-up. He emphasised his keenness to build up all players match fitness levels ahead of returning to league duty.

League Two Player of the Month Willie Muir captained the side, with Stuart Morrison and Brody Paterson brought into the back four alongside former Doonhamers Michael Doyle and Lee Kilday. Canice Carroll was handed his first start for the club in central midfield and partnered the returning Grant Gillespie.

Further forward, McKinnon gave Jai Quitongo the opportunity to impress from the start following his four substitute appearances since joining the club. He played from the left, with Darren Lyon on the right and Craig Slater deployed behind Will Baynham upfront.

There was a mix of youth and experience on the bench. With Peter Grant, Bob McHugh, Michael McGlinchey, and club captain David Galt joined by youngsters Max Gillies, Calum Biggar and goalkeeper Jacques Heraghty.

The visitors were still in search of their first win this calendar year and made only two changes from the side that secured a respectable draw at Gayfield on Saturday. The Doonhamers gaffer Allan Johnston opted to rest experienced duo Willie Gibson and goal machine Stephen Dobbie with both players selected on the bench. Otherwise, it was a strong starting line-up with former Spider Euan East in attack.

Before kick-off, there was a minute’s silence ahead of Remembrance Day, then all players and officials also took a knee in support of fighting racism. Referee Alan Newlands then blew his whistle, and the visitors got the game underway.

With barely one minute played, the Spiders had an early lead. Lyon – who was with Queen of the South last season – surged down the right a whipped a deep cross into the box towards Baynham. The big man rose well and headed the ball back across goal, and it was Quitongo who reacted quickest to direct his header past Jack Leighfield in the Doonhamers goal. Quitongo then celebrated in style with an athletic cartwheel and somersault.

With thirteen minutes played, Queen’s energetic start continued. Gillespie broke forward from his deep midfield position and slipped a pass inside to Slater. Slater took one touch to set himself before he unleashed a powerful shot from twenty-five yards out, but Leighfield did well to tip his effort over the crossbar.

A few minutes later and a heavy first touch by Gillespie was pounced on by Queen of the South forward Connor Shields. The former Albion Rovers man stole the ball off Gillespie and ran at the Spiders defence, but Shields dragged his shot across the face of the goal.

Straight back up the other end and Celtic loanee advanced from left fullback. Paterson powered past Aiden Fitzpatrick and delivered a pinpoint cross to the head of Baynham. The burly striker looked certain to score, but Leighfield pulled off a sensational point-blank save to deny Baynham another Hampden goal.

From the resulting corner, Slater curled an out-swinging ball in the direction of Carroll. The rugged midfielder did well to manoeuvre his body and direct a header towards goal. The ball bounced off the bar and out towards Quitongo, but he was unable to convert the rebound.

With just over twenty minutes played, Queen of the South won their first corner. The technically gifted Joe McKee flighted an inch-perfect delivery into the six-yard area, and the static Spiders defence watched as East headed past Muir to equalise.

The momentum had shifted, and the Palmerston side now had their tails up. Skilful winger Fitzpatrick dispossessed Gillespie on the right flank and cut the ball to Niyah Joseph. However, the young midfielder’s effort ended up high over the bar.

Again, it was another defensive error that presented the Doonhamers with another chance on the half-hour mark. Kilday mis-controlled a long ball forward, and Shields look to seize the opportunity offered to him. He set himself and made a strong connection with his shot from the edge of the box, but his whack at goal fizzed narrowly over Muir’s crossbar.

Two minutes later and after a couple of warning signs, the South took the lead. Fitzpatrick clipped the ball into East around the penalty spot. He expertly brought the ball under his control and fed it onto Shields, who neatly laid the ball off to Joseph. On this occasion, the attack-minded midfielder showed great composure and curled the ball past Muir and into the net. A brilliantly worked move

The Spiders managed to stem the tide as the half-time interval approached. Apart from a tame long-range effort from Carroll, the home side struggled to get back into the game.

Into the second half, and it was the Spiders who were back on the front foot. Queen of the South fullback Nortei Nortey played a poor pass across the face of his defence, and the alert Baynham looked to take advantage of the situation. The imposing forward took one touch and struck for goal, but centre-back Gregor Buchanan blocked his shot, which deflected out for a corner-kick.

Slater was forced off ten minutes into the second half with an injury, and McGlinchey was introduced to action to sample the Hampden experience for the first time.

Shortly after the manager showed his hand again, Kilday and goal scorer Quitongo were replaced by defensive organiser Grant and creative winger Galt, as Queen’s went in search of an equaliser.

Although, it was the Queens of the other variety that looked more likely to score next. Shields charged forward on the right and chipped a lovely ball across for McKee, who met the ball flush with his left foot but somehow missed the target from close-range.

As time marched on, McKinnon again turned to his bench. Off went Gillespie and Lyon, as the head coach threw on striker McHugh and young midfielder Biggar.

With around ten minutes left to play, it was McHugh who looked determined to score his first goal in Queen’s Park colours. Grant’s ball forward found its way to the frontman’s feet on the edge of the area, but McHugh snatched his shot just wide of the near post.

Only a minute later, and the Spiders looked to counter forward through Baynham, but left-back James Maxwell intercepted his pass out wide. The youngster then carried the ball forward and continued unchallenged into the box before firing past Muir to put the Doonhamers 3-1 up. The men from Dumfries looked set to win their first game this year!

The goal knocked any impetus out of the Spiders and before long referee Newlands blew his whistle for full-time.

After a promising start, head coach Ray McKinnon was understandably disappointed in the manner that we conceded the goals. Despite the result, he felt lessons could be learnt and sought to focus on the positives of giving fringe players some crucial game time. Next up for the Spiders is our final League Cup group fixture as we welcome SPL side St Mirren to Hampden Park this Saturday.

Queen of the South