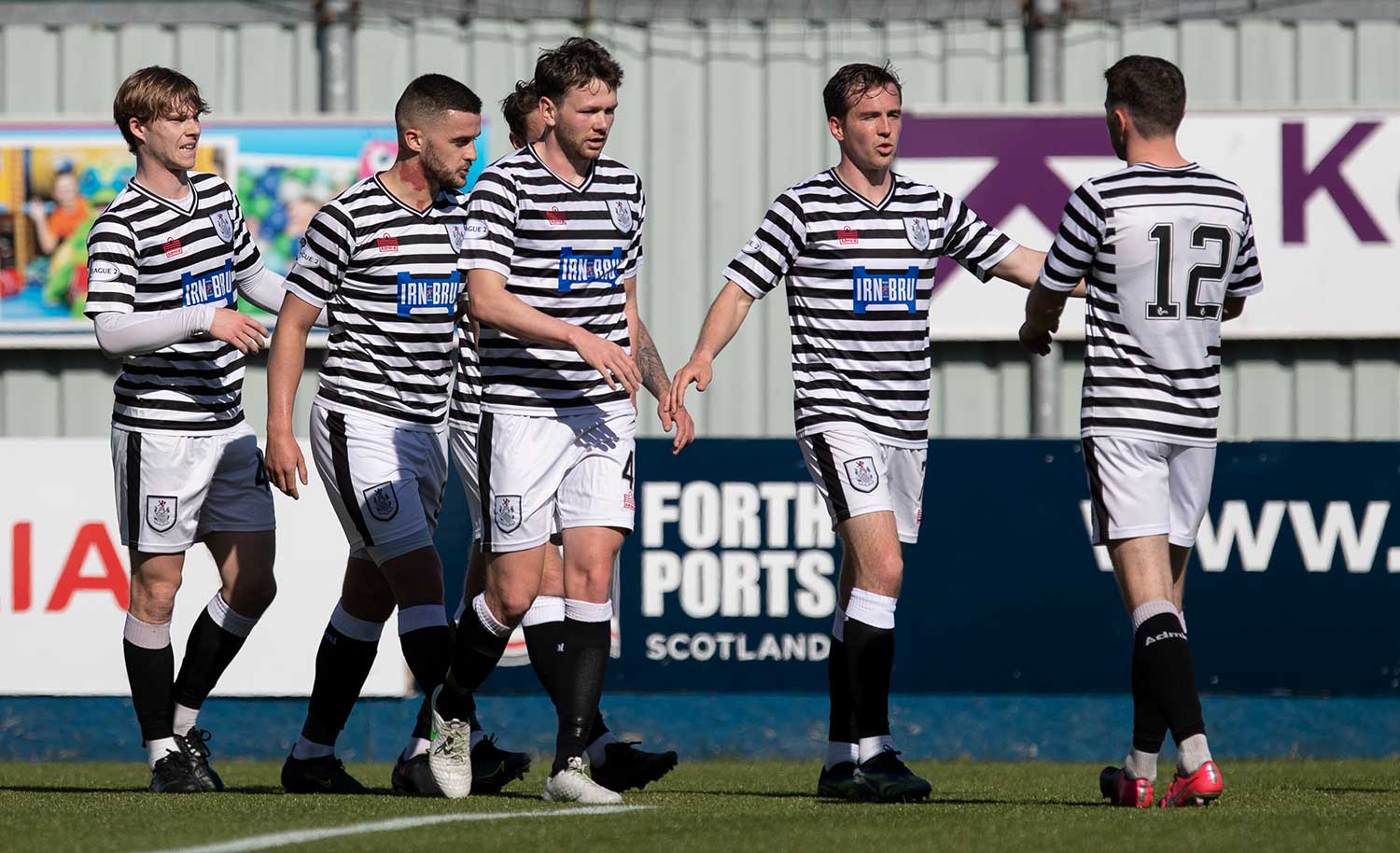 We all know that moving home is stressful at the best of times – but when you’re coming up for 154 years old the prospect is enough to send shivers up the old spine.

But that was exactly the position Queen’s found themselves in today as they prepared for their first game in their new base at Falkirk. Two weeks after saying farewell to our Hampden home with a resounding 3-0 victory over Stranraer, the Spiders prepared to face a strong Stirling Albion team.

While the setting may have been unfamiliar, there are more than a few well-kent faces in the Stirling camp. No fewer than five former Spiders – Kieran Moore, Kurtis Roberts, Lewis Magee, Dom Docherty and Darryll Meggatt are now plying their trade at Forthbank. Meggatt and Roberts started today, with Moore and Docherty on the bench.

As for the Spiders, Ray McKinnon made one change from the side which dealt comfortably with old rivals Albion Rovers in midweek – Ross MacLean coming in for Jai Quitongo.

It was a gorgeous wee day as Stirling kicked off – the sunshine bathing the park and the Kelpies looking on curiously.

The visitors started in spritely fashion, without causing any sort of threat to Willie Muir. Queen’s on the other hand almost scored with their first attack after eight minutes. Young Connell whipped in a vicious free kick which just eluded Grant.

A couple of minutes later Queen’s earned the first corner, but referee McFarlane spotted a push and that was the end of that.

McGeachie produced a strong run up the right as we approached the 20th minute, but Paterson stepped in to end the danger and set Queen’s off. Connell’s left peg was again the main weapon as the Spiders won another free kick on the right. This time Binnie came to claim.

Queen’s were slightly on top, but Albion showed their menace winning a corner after 23 minutes.  The effort was easily cleared.

The first card of the game arrived after 25 minutes when Hamilton clattered Connell and received the only possible punishment.

Mckin earned the visitors a foul in a dangerous position moments later. Leitch swung the ball in and Grant nodded it behind for a corner. As the cross came in the ref spotted yet another infringement and the stop-start game stopped again.

It was the Spiders turn for a corner after 32 minutes – and they made it pay.  Connell’s delivery was knocked on by Kilday and landed in the back of the net via a slight deflection off the unfortunate Megaatt.  The goal was like the game to date … a bit scrappy, but Queen’s weren’t arguing. The only debate was whether it was an OG or another for Kilday.

Lyon earned himself a booking after 36 minutes for a foul on Hamilton.

Five minutes from the break, Stirling won a corner, which sailed harmlessly out of play on the far side.

Right at the death, a neat move down the QP right made space for McHugh to get a shot away from distance. Binnie kept it out.

No changes on either side at the break.

Two minutes in, Salim went into the book when Allan was caught by the striker’s boot. A soft one would be the kind way to describe it.

Stirling earned themselves a corner after 51 minutes. Kilday rose well to head clear.

The busiest man on the park was referee McFarlane whose decision making certainly wasn’t helping the game flow. He booked MacLean for a late challenge, which again looked worse than it was.

Just before the hour, Stirling made their first change, Heaver being replaced by Kirkpatrick.

Salim came desperately close to making it two after 62 minutes when he showed great strength to get on the end of a Connell long ball. The striker’s finished beat Binnie, but also slipped by the post.

Stirling then had their best moment, but while Allan’s cross was begging to be finished, Leitch failed to oblige.

Queen’s made a double change after 67 minutes when Galt and Quitongo replaced MacLean and McHugh.

Jai went into the book within seconds when McGeachie was sent tumbling.

Salim then should really have made it two when a header back in from Longridge gave him a glorious chance. Unfortunately he dragged the shot wide.

Willie Muir came to Queen’s rescue after 70 minutes when he bravely claimed a low cross from Roberts with half of Stirling waiting to pounce.

A couple of minutes later, Mackin and Scott Roberts were replaced by Byrne and Moore.

A driving run from Kirkpatrick gave Moore a glimmer of a chance, but Queen’s blocked the effort as the visitors stepped up their search for an equaliser.

Salim was replaced by Baynham as Queen’s tried to regain the momentum. The striker did have the ball in the net with just his second touch, but the push on Meggatt to give him the opportunity was just a shade too obvious.

Queen’s had what looked like a stonewaller denied by McFarlane as Quitongo was halted in the box – twice – by Allan. Jai still managed to stay on his feet and get in a cross which found Galt in a glorious position, but David couldn’t convert.

Inside the final minute of the 90 Quitongo skinned Allan again and was fouled again. Before the foul was taken, Gillespie came on for Lyon. Binnie claimed the ball when the foul was played in.

With Stirling pushing everyone forward, Quitongo was enjoying loads of space and after skinning Allan again, he tried to find Baynham, but the striker couldn’t take the ball in.

The final note of the game went to Mr McFarlane, who booked Doyle for timewasting.

So it’s a winning start for the Spiders in their new home, which leaves them 10 points clear of the rest at the top of the table. And we’re back here on Tuesday to face Cowdenbeath.