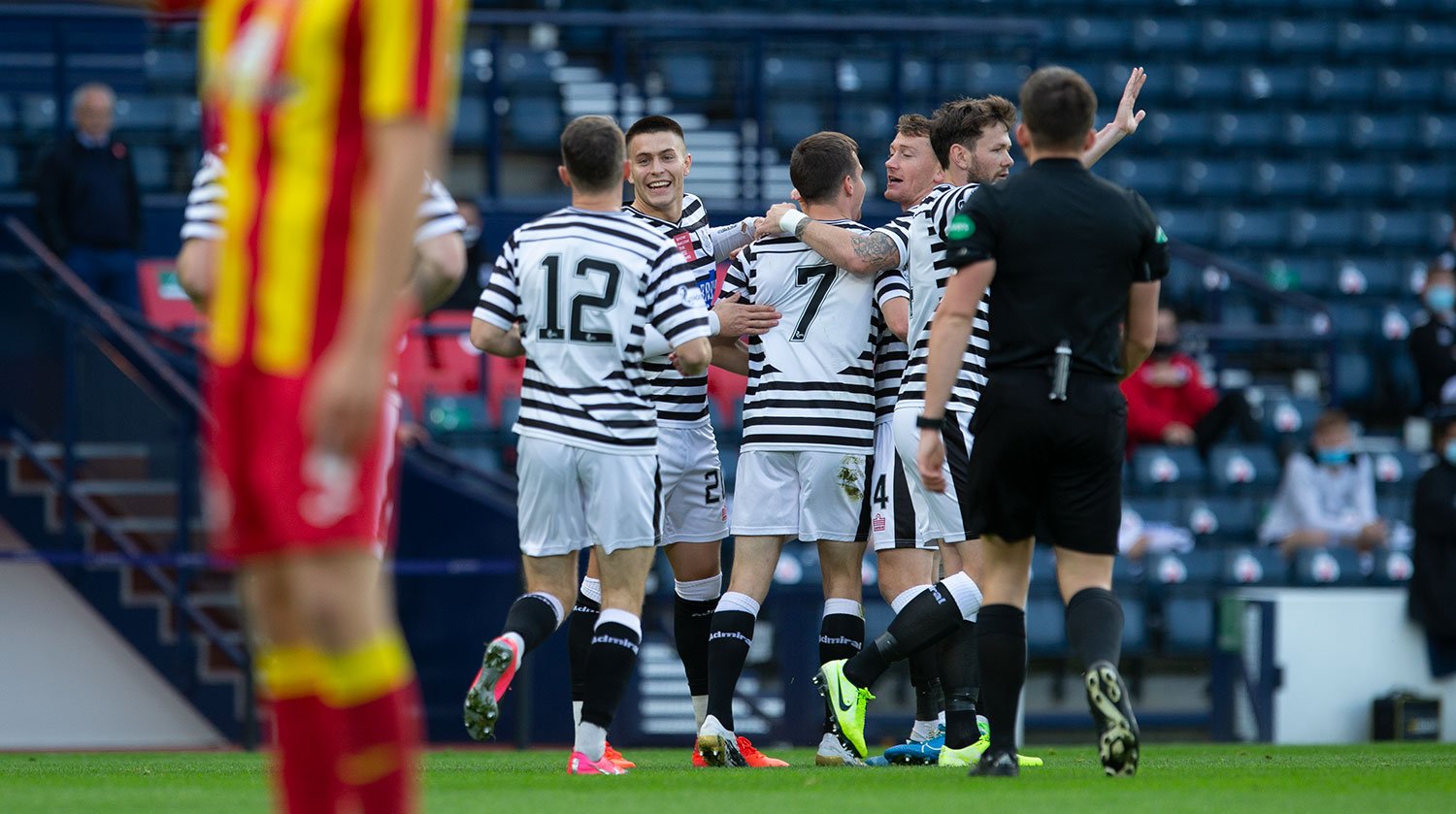 After three tricky away fixtures to begin the season, eventually, Queen’s Park were back home. Our long-awaited Hampden return saw us welcome Albion Rovers as visitors. It had been almost eight months since Queen’s Park last played at Hampden Park, a 2-0 victory against Annan Athletic back in February.

Queen’s were still in search of their first goal of the season. It was our previous Hampden outing that saw us score our last competitive goal: Salim Kouider-Aissa converting a first-half penalty that afternoon.

Manager Ray McKinnon welcomed both Craig Slater and the experienced Cammy Bell back into the squad, with both players selected on the bench. Simon Murray – who had recently returned to non-contact training – was the only player to miss out. The head coach made only one change to the starting line-up with David Galt – who was making his 175th appearance for the Spiders – coming in for Ross MacLean.

Willie Muir started between the sticks with a backline (from right to left) of Michael Doyle, Lee Kilday, Peter Grant and Tommy Robson. Former Doonhamer Darren Lyon partnered the tenacious Grant Gillespie in central midfield. Louis Longridge started on the right side of midfield with Galt – restored as captain – on the left. Again, it was two upfront, with Bob McHugh and Will Baynham forming a strike partnership.

Slater, Bell and MacLean were joined on the bench by Stuart Morrison, Brody Paterson, Calum Biggar, Jacques Heragthy and new signing Jai Quitongo. Quitongo was signed permanently during the week following his substitute appearance as a trialist last weekend at Forthbank.

Rovers manager Brian Reid had recruited a youthful squad. He has utilised the loan market of several occasions, bringing in teenagers on loan from Dunfermline Athletic, Ayr United and their local rivals Airdrieonians. However, Gregor Fotheringham – one of their more experienced players – was a familiar face starting in the Rovers midfield. The former Spider made over fifty appearances for the club during his time at Hampden.

It was a dramatic encounter when the sides last met in January at Hampden Park. The Rovers had taken a two-goal lead into the half-time interval thanks to goals from Declan Byrne and Ousman See. Although, Queen’s were quick out the blocks in the second half, with Galt and a Kouider-Aissa spot-kick restoring parity. The Spiders then pressed for a winner; however, the referee awarded a late penalty to the Coatbridge side. Yet, Byrne’s well-struck effort was superbly saved by Muir as Queen’s rescued a point.

Both sides emerged from the Hampden tunnel with their red cards in hand, as part of the annual fortnight of action to ‘Show Racism the Red Card’. Before kick-off, all players and officials also took a knee in support of fighting racism. Referee Matthew MacDermid then blew his whistle to begin the contest, and league football was finally back at Hampden.

With only a couple of minutes on the clock, the Rovers had the first goal attempt. Debutant Paul Allan skewed his long-range effort high and wide of Muir’s far post. There were only five minutes played when Queen’s first ventured forward with purpose. Galt collected the ball wide on the left and played it back to Robson. The fullback – in a deep position – arrowed a ball towards to back post in the direction of Baynham. The big man rose well against his opposing fullback and powered his header past the Rovers ‘keeper and into the net to give Queen’s the lead (and our first goal of the season)!

The goal seemed to give the Spiders an early spark of energy as they looked to attack towards Ryan Goodfellow in the Rovers goal. Baynham plucked a long cross-field ball out of the air and expertly laid it back to Galt twenty-five yards out from goal. The captain worked the ball onto his favoured right foot, but Goodfellow easily gathered his tame effort.

Moments later and Galt and Baynham were combining again, this time with the desired outcome. Galt went on a mazy run through a statue-esque Rovers defence and drilled a threatening ball across the face of the goal. Baynham was lurking at the back post, and the Brisbane born striker banged in his second goal of the game within the opening twelve minutes.

The relentless Spiders swarmed forward again, and it was the inspired Galt in pursuit of his 25th goal in Queen’s Park colours. A slick one-two with Lyon created space for the skilful Galt, and he unleashed a shot at goal, but Goodfellow parried his attempt out. Baynham pounced on the rebound, but he could not squeeze his effort into the net from a narrow-angle. The big man looked hungry for his hat-trick.

The Cliftonhill men were struggling to contain Queen’s attacking players, with Longridge regularly dispossessing the Rovers midfielders in dangerous areas. As half-time approached, it was Doyle who raced forward from fullback and stretched to get onto the end of a curled near post cross from Baynham. Although Doyle could only get his heel to the crossed ball and Goodfellow comfortably collected his attempt.

Before the interval, Queen’s had the final chance of the first half. Rovers centre-back Scott Glover could only head the ball to Galt in the penalty area, but his deflected effort fizzed straight into the arms of Goodfellow.

McKinnon was forced into a half-time substitution as Kilday was unable to recover from an arm injury picked up late in the first half. Morrison was his replacement, reigniting his defensive partnership with Grant which impressed towards the end of last season.

Three minutes into the second half and it was Albion Rovers who started the brighter of the two sides. Queen’s failed to clear from a corner and Fotheringham’s tempting cross was headed narrowly wide by Glover.

A few minutes later and it was Queen’s bursting forward at pace. Baynham’s flick-on was laid back to him by McHugh. Baynham then rolled the ball to the advancing Galt who delicately chipped the ball over the onrushing Goodfellow, but Finn Ecrepont managed to race back to clear the ball off the line.

With an hour on the clock, McKinnon sought to introduce Slater to the action. The creative midfielder – returning from injury – replaced Lyon in the middle of the park.

Only a minute later and Queen’s were bearing down on the Rovers goal again. Longridge on the right slipped the ball forward to McHugh. He had managed to escape the clutches of Glover and rifled a shot towards goal, but Goodfellow did well to tip the ball over the crossbar.

Shortly after Rovers had their best chance of the game, Sean Fagan’s pinpoint cross found the head of striker Matthew Aitken, but Muir stretched terrifically to touch his looping header over the bar.

As the match progressed, Albion Rovers were starting to cause problems for the Queen’s defence. Midfielder Callum Wilson was brought down on the edge of the area by Gillespie and Ecrepont’s freekick effort was curled wide of the post.

Head coach McKinnon then made a double substitution: MacLean was brought on to the right side of midfield replacing Galt as Longridge shifted to the left flank, alongside Celtic loanee Paterson replacing Robson at left fullback. Then with ten minutes remaining Quitongo replaced McHugh, as the game seemed to lose its momentum.

Into added time and Rovers countered forward. A perfectly weighted through ball behind Paterson presented substitute, Joseph Moore, with a golden opportunity. Still, he curled his effort wide of the target and Muir looked set to keep his fifth league shutout in a row. Soon after referee MacDermid blew his whistle for full-time and Queen’s had their first win of the season.

Head coach Ray McKinnon was understandably delighted with the first-half performance and another clean sheet. However, he was also mindful that the team should have capitalised more on other opportunities and warned about the need not to get complacent. Queen’s are back on the road the next week with a trip down the A77 to Stair Park to face Stranraer.