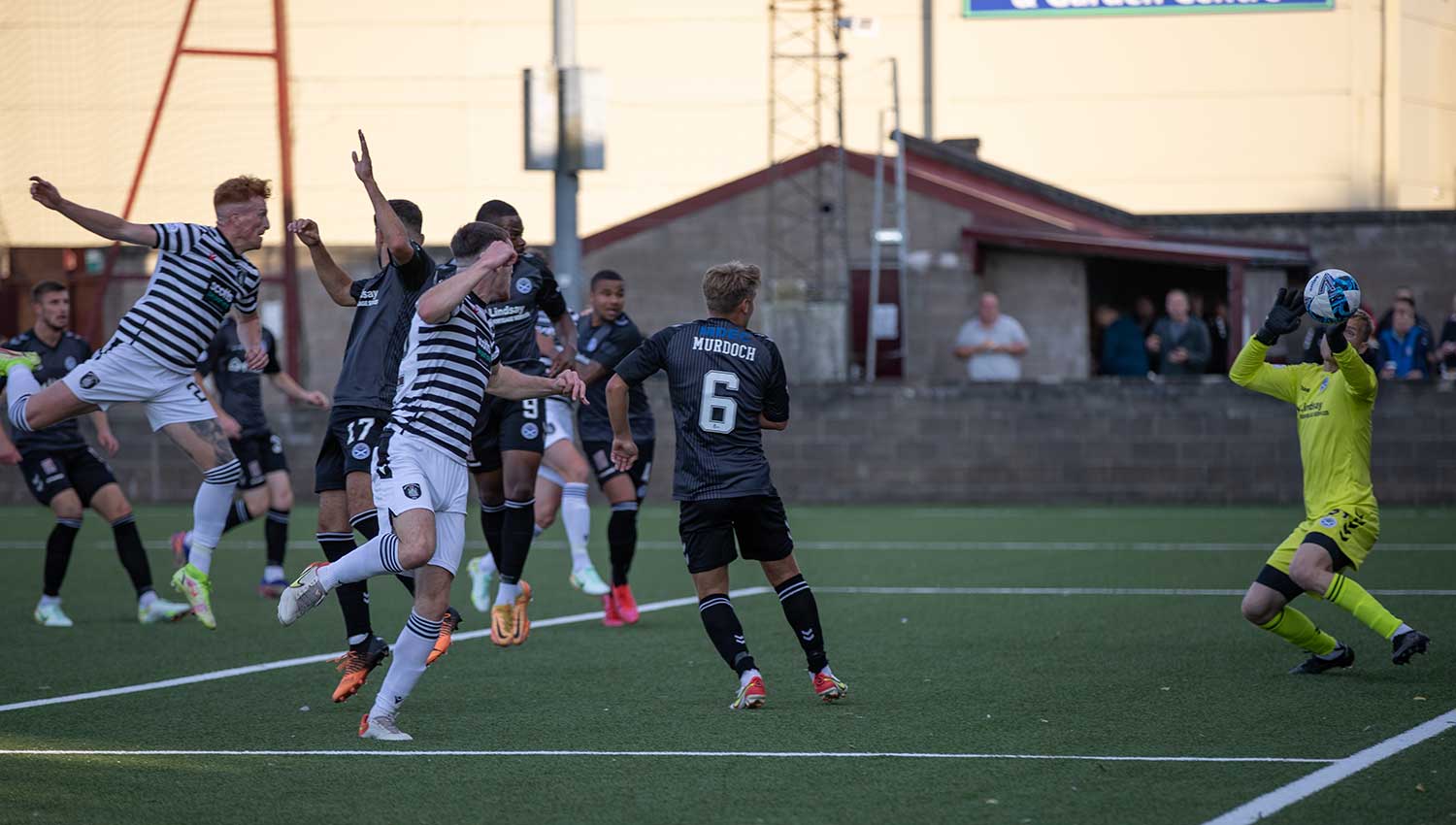 Queen’s Park looked on course for their first Championship success of the season when they hosted Ayr United at Ochilview however The Honest Men hit back to win 3-2 thanks to an injury time penalty.

The Spiders had new recruit, Nigerian internalist defender Stephen Eze, on the bench with Head Coach Owen Coyle making one change to his starting line-up from Saturday’s fine display at Inverness Caledonian Thistle with Alex Bannon coming in for Jack Thomson who dropped out of things.

With the sun splitting the Stenhousemuir skies the hosts kicked off however the ball was quickly in the hands of visiting goalkeeper Charlie Albinson.

Queen’s won a corner on three minutes when a wicked Dom Thomas cross forced visiting captain McGinty into slicing the ball over his own goal.

The corner was cleared with a Thomas free-kick from a dangerous position two minutes later also dealt with by The Honest Men’s defence.

Shortly afterwards Simon Murray’s persistence on the left saw the ball crossed into the six-yard box however Grant Savoury failed to convert following a clever chested pass from Thomas.

Ayr striker Dipo Akinyem wriggled clear on the left-hand side of the box on 13 minutes with Calum Ferrie grateful to scoop up his cross as it bounced across his goal.

The hosts raced to the other end and Savoury’s pass released Josh McPake in behind Paddy Reading however Albinson was not troubled as McPake fired high over.

The Black and White Hoops were on target after 19 minutes and it came in a simple fashion as Thomas floated in a corner from the right and MURRAY rose to nod home from six yards out.

Midway through the half Akinyem wriggled clear again and Tommy Robson did well to slide in and clear at the expense of a corner as the ball was fizzed across the six-yard line.

Liam Brown’s passing and McPake’s running kept Ayr pinned in their box on 32 minutes and when a pass was slipped to Alex Bannon, he released THOMAS on the left. The wide-man cut in and switched the ball onto his right foot before curling a shot out of the reach of Albinson and into the net via the far post.

It was 2-0 at the break thanks to fine goalkeeping from Queen’s and a miss from the visitors. Ferrie kept Ayr out four minutes later when he produced a leaping one-handed stop to prevent Fraser Bryden’s diving header from a Nick McAllister cross finding the net.

On 41 minutes Queen’s had another lucky escape after Bryden got the better of Fox at the edge of the box. The visiting striker moved in towards Ferrie’s goal before sending a shot high over.

Ayr made two substitutions at the break with Mark McKenzie and Diare O’Connor coming on for Frankie Musonda and Jayden Mitchell-Lawson and Lee Bullen’s side were back in the game within two minutes.

McKenzie flicked on a long ball from McAllister into the path of Akinyem who slammed the ball into the far corner.

Queen’s looked to take that knock in their stride with Murray forcing Albinson into a diving save within a minute from a whipped shot from 18 yards.

Ayr had the next opportunity with Ferrie doing well to block a left footed drive from Akinyem with the Queen’s number one excelling just before the hour mark when he pushed a McKenzie effort wide after the sub had been set free by a chip from Akinyem.

Eze was brought on after 63 minutes to replace skipper Kilday with Jason Naismith replacing Bannon at the same time with Patrick Jarrett coming on for Brown six minutes later.

Ferrie had to be alert to deal with a bouncing McKenzie header before Ayr restored parity on 78 minutes when Sean McGinty rose at the back post to send a header flashing into the net from a Ben Dempsey corner.

The night was to end in severe disappointment for Queen’s as Fox was penalised when an O’Connor cross spun up and hit his arm two minutes into added on time.

Akinyem stayed cool and despatched home the resultant penalty to spark a mini pitch invasion from the supporters behind his goal. 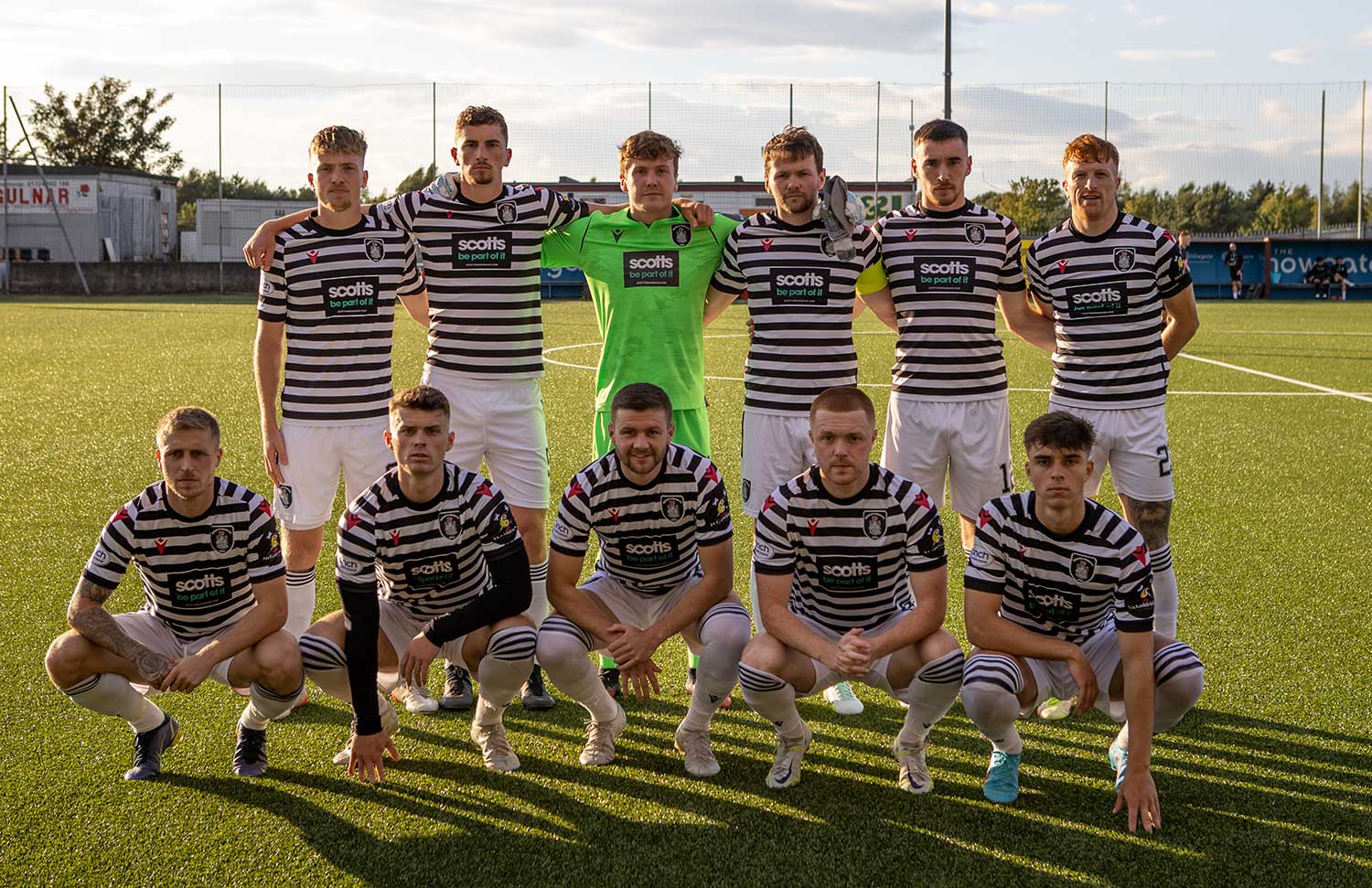