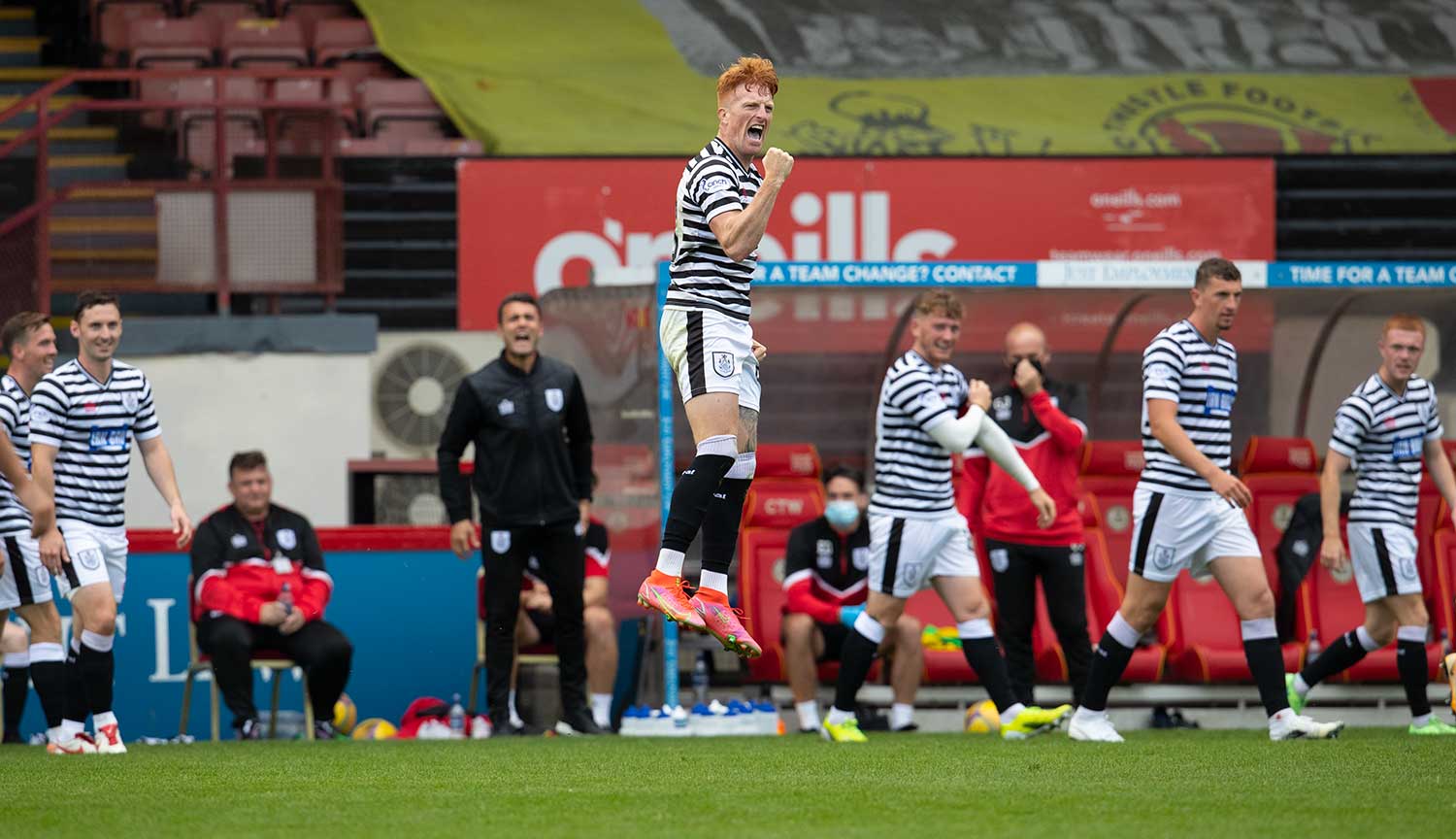 A quick-fire double after the break including a stunning free-kick from Simon Murray was enough to give the Spiders all three points against the 10-men of Cove Rangers on flag day at Firhill.

Laurie Ellis made one change to the side that drew on the opening day away at East Fife as Louis Longridge came in to replace Lewis Moore on the flank.

Like Queen’s, Paul Hartley’s side also drew 1-1 last Saturday as they faced Falkirk.

Before the match, there was a moment of celebration at Firhill as the league flag was raised alongside the League 2 trophy from last season’s success.

Queen’s were forced into an early substitute in the match as Jake Davidson was caught late and ultimately forced off to be replaced by Jack Thomson.

The hosts were the first to test either goalkeeper as the ball was worked out to the left, a first time effort followed from Longridge but it was easy enough for Kyle Gourlay in the Cove goal.

The first half was rather bitty from there, Murray did have a strong run through the defence but the strike didn’t really trouble Gourlay.

Up the other end, Liam Brown was caught on the ball allowing Mitch Megginson in for a great chance but his shot was superbly blocked by Stuart Morrison before his centre-back partner Charlie Fox dealt with the rebound.

There were a number of injuries throughout the first period which again disrupted the flow for both teams.

As things looked to be petering out towards the break, there was a major flashpoint as Fyvie leapt into a challenge on Fox with referee getting the red card out with little hesitation.

Hard to see the severity of the challenge but the midfielder looked to go in with two feet and the lack of complaints from the away bench probably told the story.

With that, the Spiders came out for the full of the second-half with that man advantage as they looked to pile on the pressure with McHugh on up top replacing Callum Biggar.

Within minutes, they make that advantage count.

Firstly, Murray whipped in a rocket of a free-kick across Gourlay and into the top left corner, you won’t see a better dead ball effort than that.

If the Cove ‘keeper was helpless for the opener, just a minute later, he was all at sea as a poor pass out of his area went straight to McHugh who took on the shot which Gourlay ought to have saved but spilled before the ball squirmed into the net for 2-0.

The Spiders had blown their opponents away and now the players were visibly enjoying themselves.

McHugh could have had a second as Queen’s raced away on the counter but Gourlay turned his low strike round the post this time.

The front two then combined brilliantly with 15 minutes to play, a flick from Murray put McHugh on his way before he returned the favour inside the area but Murray’s close range finish was well saved.

Murray had an even clearer opening to give Queen’s their third as Brown pinched the ball from Ryan Strachan at the back before cutting it back to the striker but he lost control of the shot and blasted well over.

Overall, the turning point came with that Fyvie red card and with the extra man, Queen’s took a firm grip of the game with those two quick goals and from then, there was no way back for Cove.

The spiders take a first win in the cinch League 1 into Tuesday’s SPFL Trust Trophy clash with Lowland League side Bonnyrigg Rose.