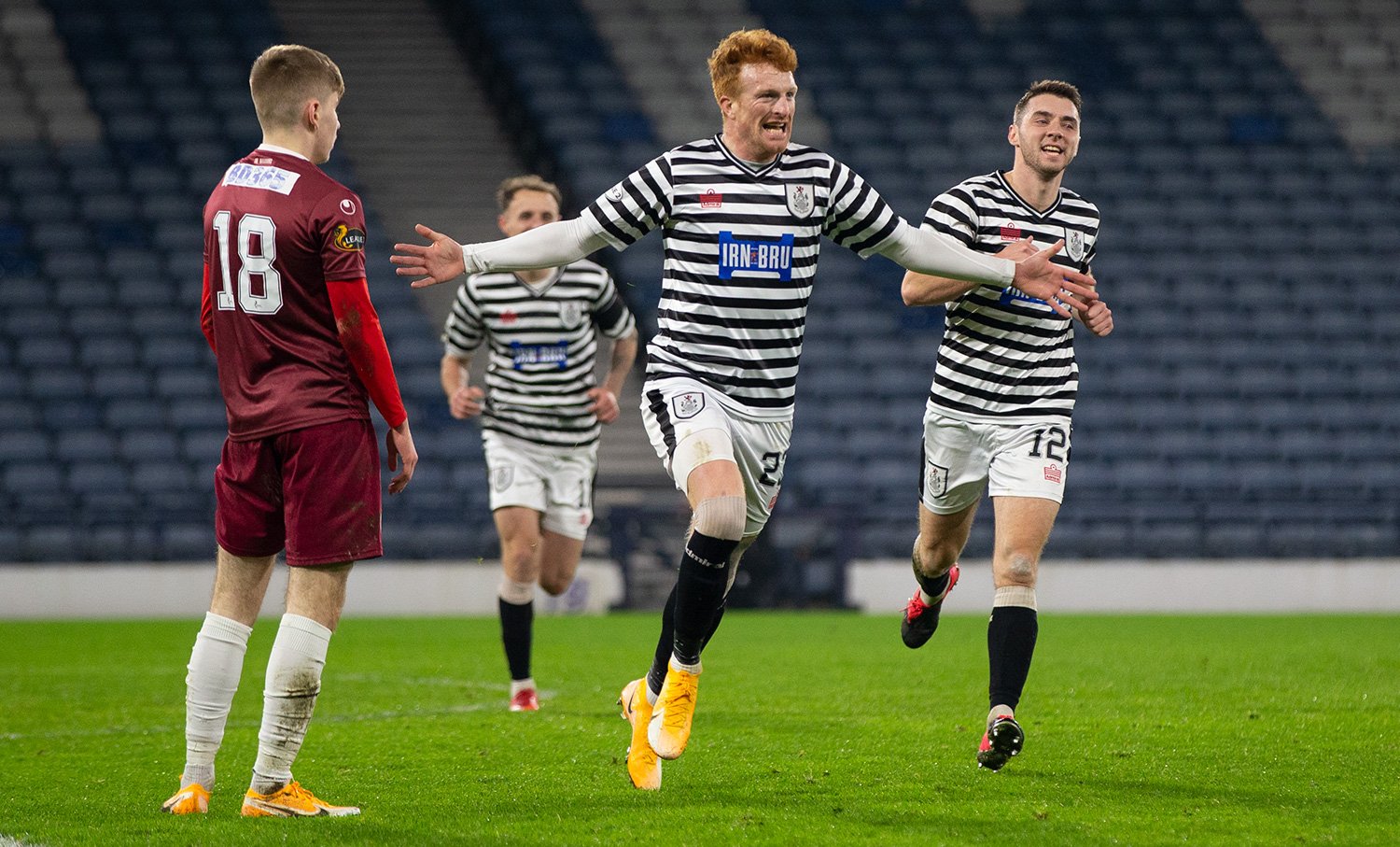 SIMON MURRAY climbed off the bench to score on his competitive debut for Queen’s Park as the home side came from a goal down to make it five league wins on the bounce.

The big summer signing – who also notched an assist in his first 15 minutes in the hoops – was visibly delighted with his strike after a long, long spell on the sidelines.

Lee Kilday and Bob McHugh grabbed the other goals for the table toppers as they extended their unbeaten run at the top of League Two to six games and remain four points clear of nearest rivals Elgin City.

Stenhousemuir proved to be a real threat throughout the contest but a late quick-fire double for Ray McKinnon’s men made sure all three points were remaining in Glasgow’s south side.

Jai Quitongo picked up where he left off last week and carved out the first chance of the game for McHugh to double his tally for the club but his close-range effort from around a yard out hit off Patrick Martin’s legs and out for a corner.

Chances were few and far between in the early exchanges but the visitors found themselves in front – with Willie Muir’s goal breached for the first time in the league this season – in the 11th minute.

A long goal-kick from Martin was flicked on by Tommy Muir into the path of Botti Biabi and the striker made no mistake as he slotted the ball beyond the Spiders No1.

Quitongo continued to be a threat throughout the first-half with his pace and direct running but his dangerous deliveries were just not falling to the feet of his team-mates as the home side chased a leveller.

Skipper David Galt was close to bringing McKinnon’s men level in the 20th minute after some excellent play by Will Baynham.

The striker collected a throw-in from Tommy Robson and turned his man brilliantly before putting the ball into the path of Galt but his drive from the left-side narrowly missed the target.

McKinnon and Co continued to have the bulk of the ball and they scored a deserved leveller with seven minutes of the half remaining.

Galt played a short free-kick to Darren Lyon and after receiving the ball back he delivered a tasty ball into the Stenny six-yard box and Lee Kilday was on hand to fire home his first goal for the club.

Four minutes later Kilday had a half chance to grab his second of the match but his header from a Galt corner landed on the roof of the net.

The visitors had the first half chance of the second period but Ryan Blair’s effort from 30-yards was high and wide of Muir’s goal.

The away side then had loud appeals for a penalty against Michael Doyle waved away by referee David Lowe just before the hour mark following Callum Tapping’s deep back post cross to team-mate Greig Spence.

Moments later a very well worked move from the Spiders eventually found Galt and his low cross fell to the feet of Quitongo but he got his effort all wrong and fired high and wide. A real opportunity for the home side.

Quitongo was once again at the heart of Queen’s Park attack and after some lovely tricks and flicks, he won a dangerous free-kick right on the edge of the Stenny box but McHugh’s curled effort was around a foot over Martin’s bar.

Stuart Morrison was next to have a big chance for the home side after a Galt corner fell nicely for the defender but he miscued his effort as the Spiders looked for the crucial second goal.

Sub Ross McLean then had a golden opportunity to turn the game around but he dragged his low effort wide of the post after some excellent build-up play from McHugh.

Murray was introduced for his debut with 15 minutes to play and the striker was inches away from scoring with his first touch but his flicked header went wide of Martin’s goal.

Strike partner McHugh was next to try his luck with a half chance as the home side searched for the match-winning moment.

And the big striker grabbed it with both hands with just three minutes remaining.

A lovely exchange between McHugh and sub Murray allowed the forward to create space and fire a low effort beyond Martin to make it back-to-back league goals at Hampden.

Murray then put the icing on the cake for the hosts as he netted from close-range in what proved to be a tough battle against a well organised Warriors side.
Victory sees the Spiders remain unbeaten in the league with Cowdenbeath next up for the league leaders. 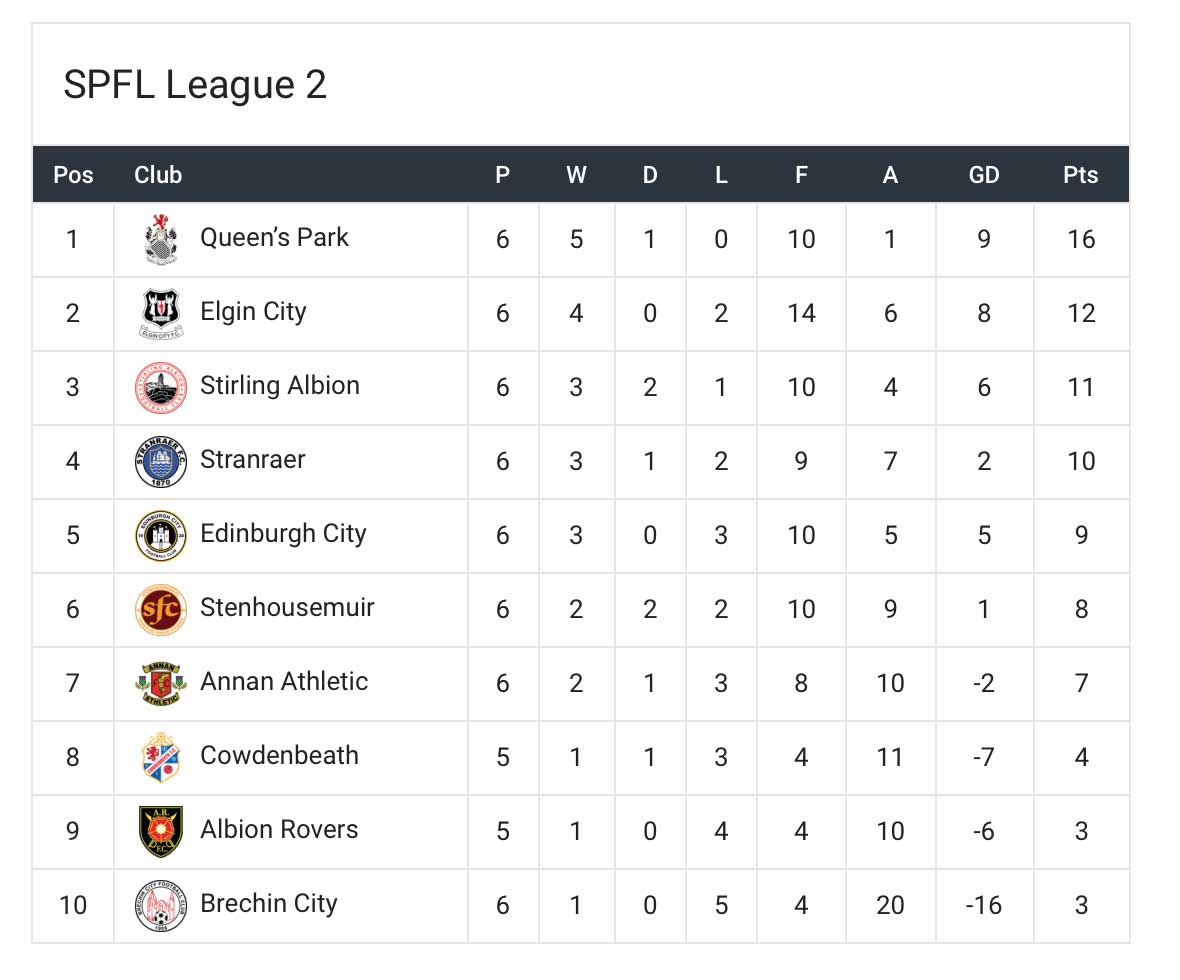