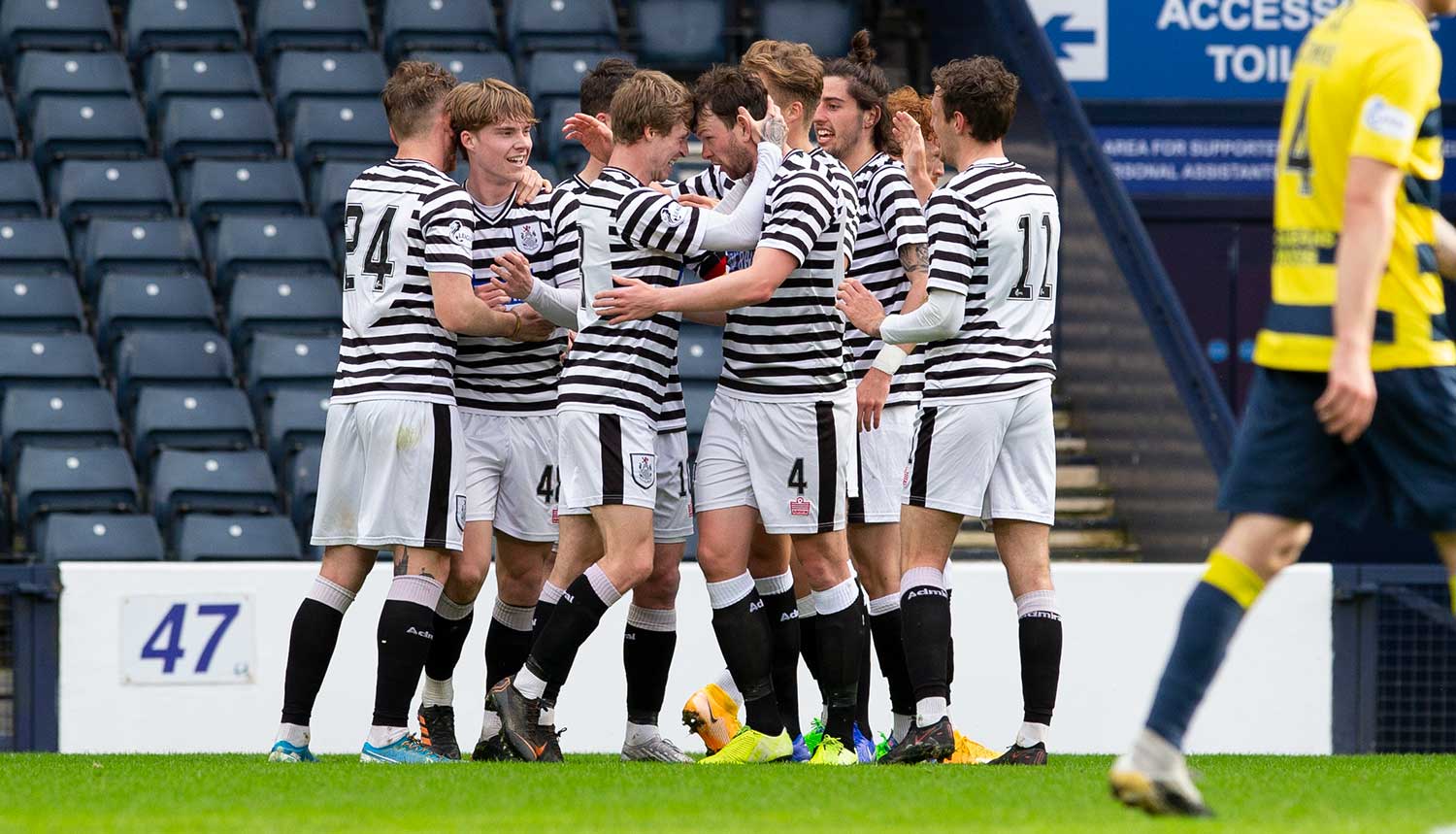 Ray McKinnon’s Queen’s Park side consolidated their position at the top of League 2 with a comprehensive 3-0 victory over Stranraer at Hampden today.

It was the Spiders’ first Hampden outing since they bowed out of the Scottish Cup against Queen of the South back at the start of January, and their first league action since they brought all three points home from Annan on December 19.

Queen’s started along fairly familiar lines, although there was a debut for one of the Celtic loanees – highly-rated midfielder Luca Connell. The week’s other loan signing from the East End, goalkeeper Ryan Mullen, was on a strong bench alongside the likes of Jai Quitongo and the returning Salim Kouider-Aissa.

The impact of the Covid enforced lay-off was the big talking point pre-match, and the signs of rustiness for both sides were clear to see in the early stages.

Queen’s had the first half-chance after five minutes, but Galt’s free-kick from the left was easy for Fleming to gather.

The home defence had its first task of the afternoon when Grant had to look lively to hook clear a dangerous cross.

The first real moment came with nine minutes on the clock. Murray won a challenge with Fleming at the edge of the box and as the ball dropped, the QP striker hooked it goalwards, but his effort sailed over the bar.

Fifteen minutes in, Queen’s won the first corner after good work from Murray. Robson’s delivery was easily booted to safety.

There were promising signs developing down the Queen’s left, with Robson, Connell and Galt looking as if they could fashion an opening.

Simon Murray had the best chance to open the scoring after 18 minutes when neat interplay on the edge of the box saw the striker exchange a 1-2 with MacLean before Fleming did well to block the shot with his legs.

Two minutes later Murray turned provider with a glorious cross and Doyle looped a header over Fleming and in at the far post to put Queen’s 1-0 ahead.

Referee Williams hadn’t been involved in the opening quarter, and showed he was trying to let the game flow by playing a good advantage after McHugh was fouled … before bringing play back for the free kick when no advantage materialised.

The long legs of Kilday came in handy to cut out a dangerous flick through from Paton in a rare Stranraer attack.

Former Spider Adam Cummins fouled Carroll in a dangerous position on the right after 29 minutes – and paid the ultimate price. Connell’s delightful inswinging delivery was headed home by Lee Kilday and Ray McKinnon’s men had a 2-0 cushion.

They nearly threw away that gap within seconds as Muir got in a tangle with Paton and it took a crunching challenge from Carroll to avert the danger.

Stranraer enjoyed a spell of possession, without making Muir do anything out of the ordinary.

Seven minutes from the break, McHugh won a foul in a similar position to the one which led to the second goal. Connell’s delivery this time was nicked away from danger.

It was the last noteworthy action of the first half which ended with the score:

Neither side made any changes at the break, but Stranraer did try to press more from the off.

Doyle went in the book after 50 minutes for a high challenge and Paton carved a path through the Queen’s defence before his final shot was blocked.

Galt then went into the book for “diving” under a challenge.

Carroll needed a lengthy spell of treatment after taking a knock as the visitors continued to work hard to get back into the game. The midfielder couldn’t continue and was replaced by Darren Lyon.

With tempers rising, Stranraer’s Millar went in the book for a foul on Galt.

Just after the hour mark, Queen’s won a corner and Robson’s delivery had to be scrambled clear.

Four minutes later, Queen’s were 3-0 ahead. Murray played Galt in and the Skipper’s quick feet left Millar all at sea. He brought Galt down just inside the box and McHugh smacked home the penalty with ease.

It was his last action as he was replaced by Kouider-Aissa. Stranraer also rang the changes, bringing on Joao Victoria and James Hilton to replace Darryl Duffy and Ruari Paton.

The game was all a bit disjointed, and the number of changes didn’t help.

Stranraer brought on Taylor and Elliott to replace Orr and McManus after 72 minutes and then Queen’s made a triple change when Quitongo, Gillespie and Longridge replaced the excellent Connell, Galt and McLean.

When the football resumed, Stranraer won a corner on the right, but Muir gathered the final header with ease.

The visitors made their final change with 12 minutes to go; Yates replacing Stirling.

Salim had a shot wide before Vitoria failed to make the most of an opportunity to cross.

As we entered the final 10 minutes, Millar’s bad afternoon got worse as he picked up a second yellow (and the inevitable red) for a block on Quitongo.

Quitongo won a corner for Queen’s which was cleared, and as the visitors broke, Murray went into the book for stopping Gallagher illegally.

The home side were running down the clock with remarkable efficiency and were still full of running as Murray demonstrated by chasing back deep into his own half to thwart Vitoria in the 90th minute.

Neither keeper was seriously tested in the final minutes and Queen’s saw out the game for the victory which maintained their five-point lead at the top of the table.

Next up for Ray McKinnon’s side is a trip to Glebe Park to face bottom side Brechin City.