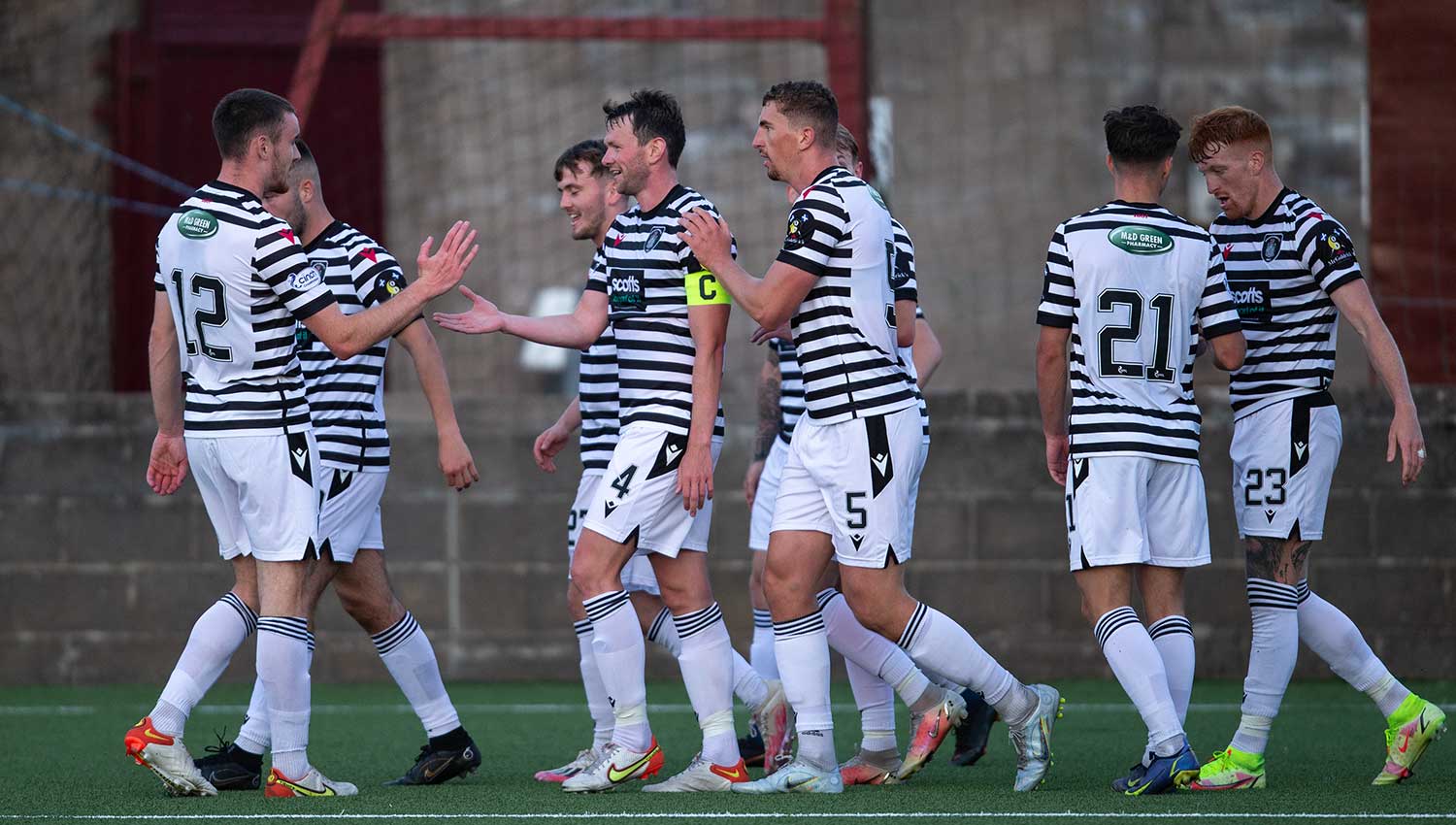 Queen’s Park defeated Forfar Athletic 4-1 in their second outing in this season’s Premier Sports Cup in their initial game at their temporary home of Stenhousemuir’s Ochilview with skipper Lee Kilday opening and closing the scoring and Scott Williamson grabbing his first ever senior goal.

Head Coach Owen Coyle made one change to the team that defeated Stranraer 5-2 at the weekend with Liam Brown starting in place of Patrick Jarrett who dropped to the bench.

The Loons, who playing their first game in the competition, included Craig Slater in their ranks and the one-time Spider almost made a huge impact in the first minute.

The ball was worked in from the left flank to Slater 20 yards out and his low drive looked net bound until Calum Ferrie produced a fine stop.

Queen’s Park looked to impose themselves on the game and striker Simon Murray rose and looped a header over Marc McCallum only to see the ball strike the bar.

On nine minutes Murray created a chance for Louis Longridge with a flicked pass however his shot flashed wide.

Forfar’s Darren Whyte was injured and replaced by Yusuf Hussain on 27 minutes with Queen’s looking to pile on more pain with Jack Thomson trying his luck with a shot from 30 yards that flashed wide.

Shortly afterwards Murray sent a pass from the left into the path of Louis Longridge on the right and he forced McCallum into a low save after forcing his way into the area.

Queen’s opened the scoring six minutes from half time when Longridge crossed low ball into the Forfar box and after it zipped past Murray Captain KILDAY was perfectly paced to side foot home from six yards.

The lead lasted until two minutes into the restart when Forfar’s half-time substitute Stefan McCluskey made an instant impact by turning the ball in from a yard out after a Slater free-kick was forced goalward by Ben Armour.

The hosts took a few minutes to recover their attacking verve however on 58 minutes Murray forced McCallum into a fine one-handed save from a header that looked set to dip under the bar with Saturday’s hat-trick hero seeing a fierce volley beaten away shortly afterwards.

In 69 minutes, a special moment arrived for recently introduced substitute WILLIAMSON who raced onto a Murray head flick leaving Andy Munro in his path before taking the ball around McCallum and blasting into an empty net.

Ferrie saved from McCluskey following a breakaway on 81 minutes and that allowed Queen’s to increase their advantage further with a minute with Lewis MOORE thumping home a rocket shot from 14 yards after a corner landed at his feet.

Murray made the visiting defence pay for falling asleep at a Patrick Jarrett free-kick in the last minute by sliding Jarrett’s pass across the Forfar goal where KILDAY turned it home to complete a fine night’s work.

The win puts Queen’s top of Group H with a big game to come against Dundee at Ochilview next Tuesday.