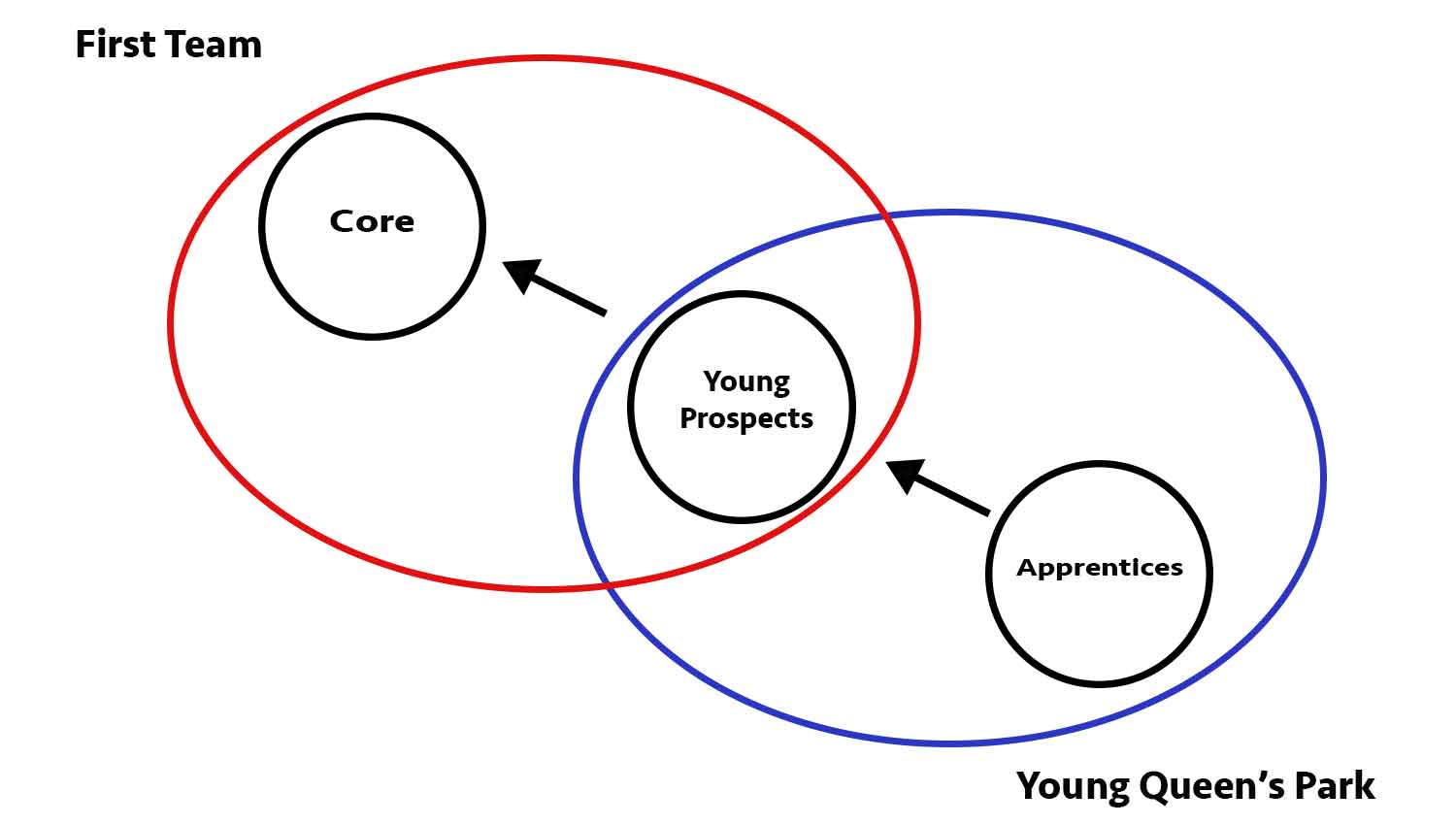 Queen’s Park will start with a new initiative, in order to facilitate and stimulate the further flow of academy players. Starting from this upcoming 2022/2023 season, they will be playing with a development team, which they will be called Young Queen’s Park

Director of Football Marijn Beuker answers some questions around this new team.

Why change?
One thing I noticed when I arrived at Queen’s Park was that the current Under 18 squad is a very talented group. They have a number of players who have the potential to become a value in the first team setup, but most are not ready yet to make the step to first team football in the Championship.

If we compare the Scottish U18 setup to the European setup, our Under 18 team are what Europe calls Under 17s, although half of the group are now turning eighteen. But what that means is that there is now a huge gap when a youngster of 17.5 attempts to make the step up to the first team. That’s too big.

On average a player who makes a successful debut and stays in the first team is 21. So, our young players need two to three years to get ready to be successful first team players. They need time to develop their football intelligence and to further mature.

Over the last years I have done a lot of research on what distinguishes good teams from winning teams. From experience, we know that a relatively small core group of players will make most game minutes, in teams that win.

So, at the composition of the first team, we are looking first to this Core group of players. The other first team players who will supplement the core group is the Young Prospects group. This group consists of players who we believe are young potentials, but also are good challengers for the core players. These players train every day on the highest level in our first team environment.

These players are considered the players that could develop into a core player in the near future. We are a club that always looks first to the high potentials we have at the club, before we look outside to players who we need to recruit.

In order to develop players, I consider training one of the most important factors. So our emphasis in the club is to create a high level training environment, both in quantity and quality. But these players occasionally need to play matches as well. But you cannot play games with a small number of players. And there is where the third group of players come in.

The third group is the Apprentice group. These are players who have demonstrated potential in the academy and need time to develop that potential. Next season, we will have around ten apprentice players that will, together with the young prospect group, form a new team; Young Queen’s Park.

Is this an idea you bring from The Netherlands?
First of all, we have created this because we want to create both opportunity for young players as well as giving players more time to further develop.

In my time at AZ Alkmaar, we had created a similar approach. Players like Owen Wijndal, Pantelis Hatzidiakos, Guus Til, Teun Koopmeiners, Calvin Stengs and Myron Boadu were all brought up in a ‘Young’ setup. They trained regularly within the first team so they could adapt to the higher level. But also played together in a competitive setup where they could create a stable connection and understanding of each other. This team was champion in the Dutch Reserve League and 3 years later formed the core of the first team that ended first in the table.

So what’s the goal of Young Queen’s Park?
In short, further develop and grow. All of these players need to become better, stronger, smarter and quicker. Also, they need to make the step from learning to win to must win.

When I came to Scotland, I was given the task to introduce a disruptive, innovative way of playing. An attractive, intense playstyle with modern players who are creative, intelligent, and quick in both feet and brain. With Young Queen’s Park, the full emphasise is to develop this kind of football and talent. And that requires time.

Is the focus on individual or team development?
It’s actually both. The programme the boys had previously is far from what I would consider to be an ideal programme. The amount of time they trained was low and that had a reflection on the functional technical movement, as well as their game intelligence. You can see the quick feet and the cognitive part of the decision making, from all the information we gather, that they are behind where European football is. Football is a team sport, but the programmes we make are all individualised. And it’s looking at the maturation process, looking at the biological ages, it’s looking at the specific qualities somebody already has or the areas he needs to work a little bit extra in.

Everything we do is individualised. An example of this individualised approach could be within the team training. When a specific player has to work a bit more in releasing himself in one of the key zones. Then in the team training, when the team objective is in creating chances, we implicitly put this player in a specific situation where he is ‘invited’ to work on this improvement. So now this exercise ‘forces’ the player to demonstrate the desired behaviour. The team becomes the supporter of the individual development.

Another example is in the strength and conditioning programme where we put some extra emphasis on explosivity for one player and for another player the emphasis will be on quick feet control.

Although players will have individualised objectives within training programmes, at the same time they need to understand the team and what it takes to play together. Every training session they are playing together, they are building an understanding of how each other plays. The sessions are built in such a way that we invite them to develop what we want, a form of implicit learning.

The key aspect here is we have time in the programme to teach the boys some new ways of playing, because you need one or two years for that to take effect. Development takes time. We are always looking for gradual improvement rather than fast improvement, because gradual improvement has higher retention.

We are challenging the boys to knock on the door and make the decisions difficult for the head coach, because the head coach will always play the ones who are best. And we have already proved with Cameron Bruce we are not afraid to give those opportunities to players.

The Glasgow Cup game against Clyde, when we won 5-0, was with the development group. That is already a first indicator of what we see of them in training.

Where they will play?
Hopefully the SPFL Reserve League will re-start this season. Together with the Glasgow Cup and other bounce games, the Young Queen’s Park will have plenty of opportunity to play games.

The objective is to train all Young Queen’s Park players in the same environment as the first team. In fact, a couple days a week the apprentice group will train together with the first team. The core players will demonstrate to them the level and tempo that’s required at the Championship level. And the coaching staff will develop the maximum from them.