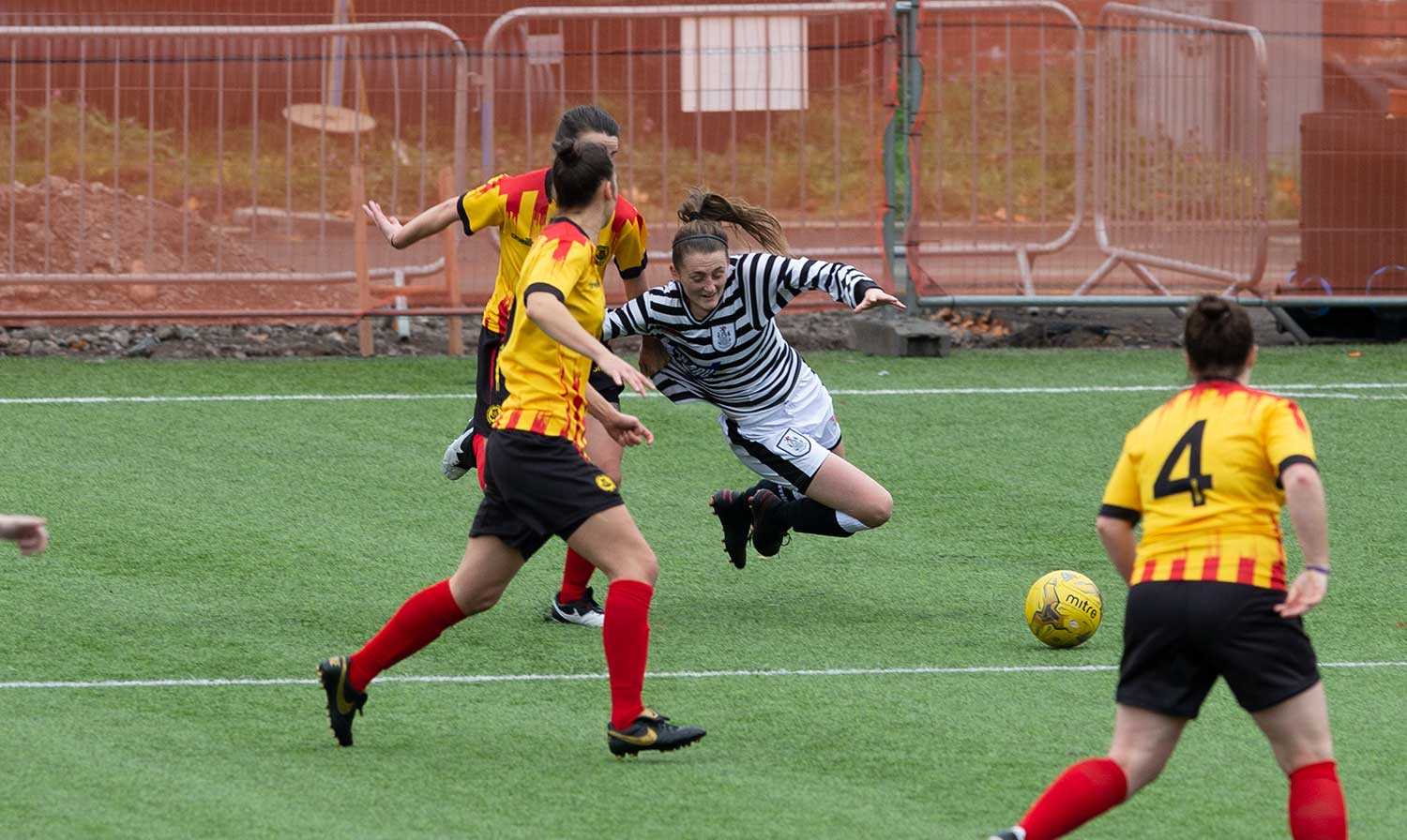 With Jayne Cameron starting on the bench, long-serving defender Lauren Ray was given the captain’s armband for the day. “We are quite a new team, there aren’t many players left from [the 2019 season], so we’re all still getting to know each other,” Ray said in her post-match interview. “But we all get on well and we’re building confidence in each other. I think we’re going to be the ‘dark horses’ in this league coming up”.

Both teams showed their support for Show Racism the Red Card (SRTRC) ahead of kick-off.

Partick Thistle edged possession in the first-half, with the Spiders defending well and producing some good passing play on the counter-attack. The hosts had to wait until the 37th minute for a clear chance, when Mhairi Fyfe tested Thistle goalkeeper Jade Baillie with an excellent strike which brought out a great save. Caddell was also kept busy by the visitors, with Eleanor Smith, Jade Gallon and Colette Fleming all coming close to scoring. “We knew that they [Partick Thistle] were going to be a physical side,” Head Coach Mark Kirk said after the game, “and I feel like we matched that in the first-half, we performed really well and we created some chances here and there. There was nothing between the two sides [in the first-half]”.

An eighteen minute period in the second-half saw Partick Thistle capitalise on a good start with three goals effectively ending the game. Wasting no time, the visitors took the lead two minutes after the restart, when Smith fired home following a Demi-Lee Falconer free-kick. Just seven minutes later, Cheryl Rigden made it 2–0 for the visitors after good work on the left from Clare Docherty. Less than ten minutes later, Falconer capped off a fine performance by scoring the final goal of the game following an Emma Craig corner. The introduction of substitutes made an impact but, despite a late rally from the Spiders, Partick Thistle ran out 3–0 winners. “It took us more time to get back into the game, and they capitalised on that, with three goals in the space of eighteen minutes,” Kirk said. “Sometimes we got a bit too frantic, especially when they scored,” Ray added, “we lost our composure quite a bit, and we need to work on that”. Still, there were many highlights and many positives from yesterday’s performance to take forward as the team prepare for the next match.

Queen’s Park are back in action on Sunday, 25th October, when they face Glasgow Women at home in the SWPL 2.