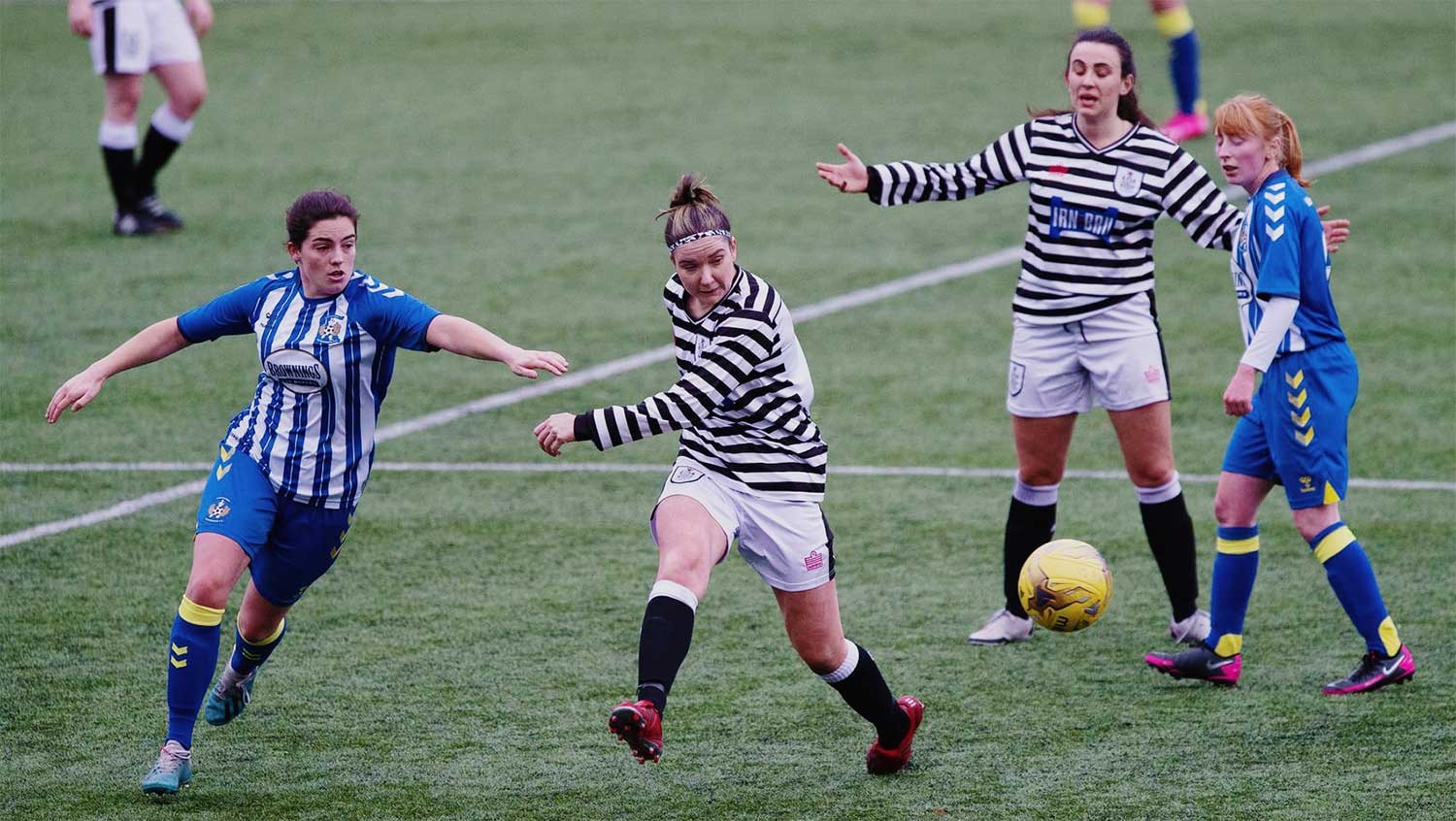 Queen’s Park secured their third win in as many games with a 2–0 home victory against Kilmarnock in the sixth round of the Scottish Building Society SWPL 2, thanks to two second-half goals from Sophie McGoldrick and Louisa Boyes. This win means that the Spiders are now in second place in the SWPL 2, behind leaders Aberdeen.

Head Coach Mark Kirk made one change from the side that defeated Dundee United last weekend, with Samantha McManus replacing Mhairi Crooks in the starting eleven. In the absence of Jayne Cameron, the defensive pair of Helen McLeod and Holli Coleman led the Spiders to their second clean sheet of the season, much to the delight of the coaching staff.

The first ten minutes of the game saw both teams feeling each other out and creating some decent half-chances. Wingers Mhairi Fyfe and Demi Potts struggled to find space as Kilmarnock sat deep in their own half, while striker Samantha McManus did well to hold-up play and support the midfield in the opening minutes of the first half. A chance fell to Docherty a few minutes later, when she found herself in space on the edge of the box and tried to curl her shot in the top left corner of the net, but unfortunately her effort went past the post.

Queen’s Park then created two chances in as many minutes shortly after the half-hour mark. First, Boyes tried her luck from the edge of the box, but her shot missed the target. Less than a minute later, Fyfe had another chance, but she couldn’t generate enough power on her strike to trouble Hunter. Boyes, who has a knack for going forward to assist in attack, was almost rewarded for her hard work in the 40th minute after she managed to connect well with a first-time volley, but her shot was saved by Hunter.

Mark Kirk made four changes in the second half, with Sophie McGoldrick, Frances Hopgood, Mhairi Crooks and Rachel Caddell replacing Demi Potts, Mhairi Fyfe, Samantha McManus and Katie Andrews. Goalkeeper Katie Andrews picked up a knock after colliding with a Kilmarnock player, and was substituted to avoid further risks.

The deadlock was finally broken in the 66th minute, when substitute Sophie McGoldrick, who had looked lively since coming on, rounded the ‘keeper to slot the ball into the empty net after receiving a long ball from McManus. This was McGoldrick’s third goal of the season, and her third in the last four games.

In the 81st minute, McGoldrick darted past a defender and found herself in the box, but from a tight angle, she was unable to squeeze her shot in. A minute later, the tireless Boyes found herself one-on-one with Hunter and finished well to make it 2–0 and seal the win. The last chance of the match fell to Crooks, who did well to turn past her marker, but her pass was cut out by a defender. “It was a different type of game today, but the team was up for it,” Samantha McManus said after the game, “We never gave up and managed to get the three points”.

Queen’s Park are back in action on Sunday, 22nd November against Stirling University in the SWPL 2.