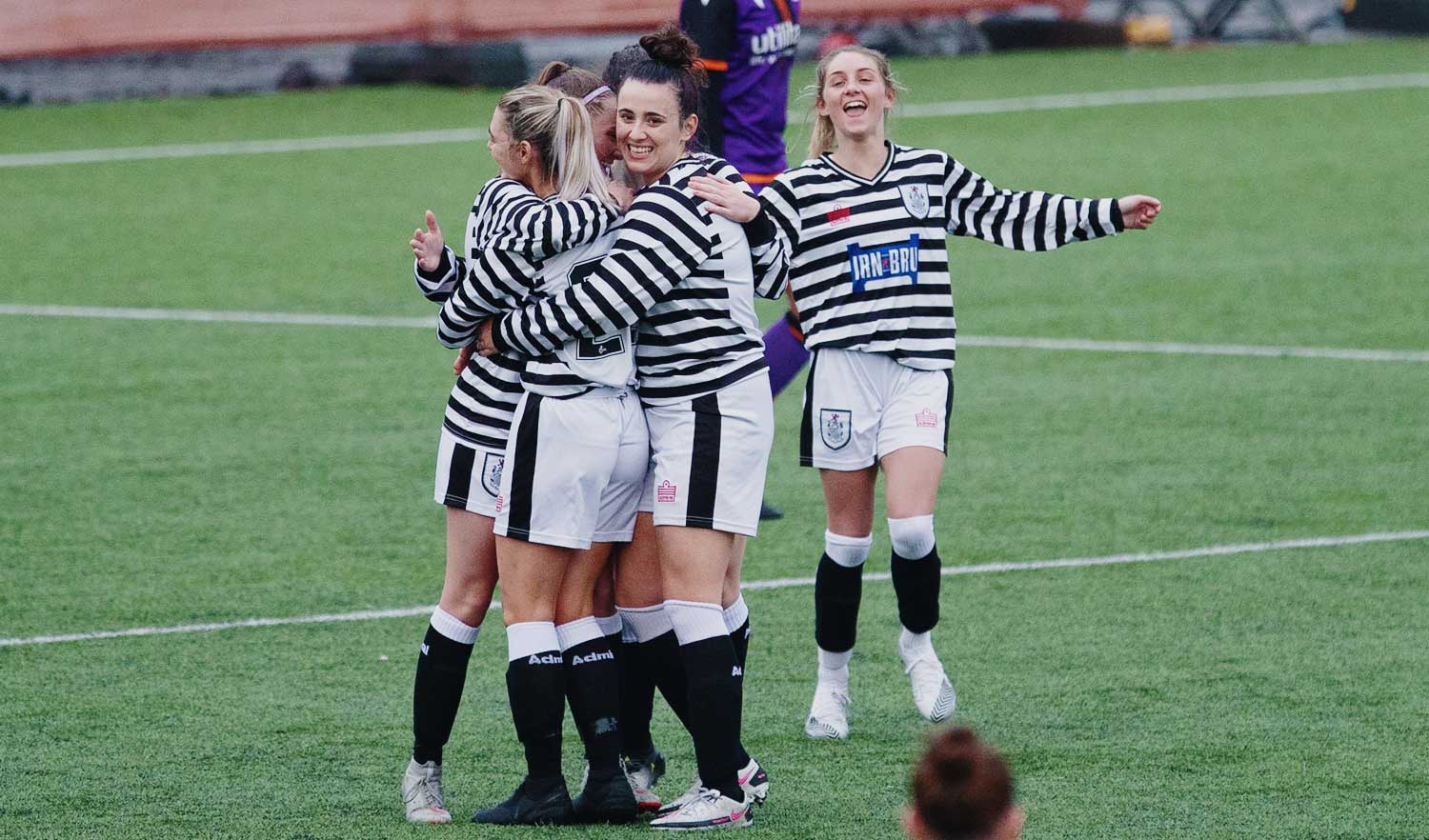 Queen’s Park registered their third win of the season which took them to third place in the league table as they defeated a tough Dundee United side in the fifth round fixture of the Scottish Building Society SWPL 2. The Spiders fought back after falling a goal behind in the second consecutive game to come away with all three points and a second win in as many games.

Head Coach Mark Kirk made three changes to the starting line-up as the team played its third game in a span of seven days. Changes saw Holli Coleman and Helen McLeod at the heart of the defence, while Demi Potts earned her place in starting eleven after a few promising cameos from the bench. The versatile Emily Shearer filled in at right-back, while the ever-consistent Samantha Davies started on the left side of the back four.

On the 10th-minute mark, Queen’s Park had their first chance as Mhairi Crooks was played through with a brilliant defence-splitting pass by Chloe Docherty, only to see her attempt saved twice by Nachman. Most of the threat came through the left side, where Dundee United kept pinging in crosses, one of which almost resulted in a goal for the visitors in the 15th minute. Boyes, Docherty and Potts combined to create a chance for Potts, and again the Spiders failed to take the lead as the chance went begging. Docherty was at her absolute best in the midfield, and she was at the heart of everything going forward in the first half.

In the 29th minute, Mhairi Fyfe looked to add on to her goal tally, but she saw her effort clear off the goal-line after doing so well to round off Nachman. Four minutes later, the Spiders conceded an unlucky goal after debutant Katie Andrews pulled off a spectacular save to keep a free-kick out, but she could do very little when Robyn Smith sent in the rebound.

Queen’s Park showed no signs of panic after falling behind and continued to dominate, and two decent chances to equalise came just before the end of the first half. First, Crooks’ effort was deflected off for a corner after she was found in space by Lauren Kerr, then Boyes was set up by Potts for a one-on-one with Nachman, but her effort failed to find the target. The last meaningful action of the first half came in the 43rd minute, as Fyfe was put through by Docherty and she tried to bend her shot, but it landed straight into the hands of the Dundee United goalkeeper.

An immediate response was needed in the second half and Louisa Boyes, assisted by Crooks, made no mistake placing her shot in the top corner in the 48th minute. The midfield duo of Docherty and Kerr complimented each other well throughout the game; Kerr sat back and controlled the tempo of the game, allowing Docherty the freedom to dart forward and help in attack.

Samantha Davies received the first booking of the game for a high-foot challenge in the 57th minute. A change of personnel saw Crooks coming off for the experienced Samantha McManus and the lively Demi Potts come off for Sophie McGoldrick as Queen’s Park looked to finally take the lead. Just two minutes after coming on, McGoldrick’s dangerous left-footed cross was cleared over the bar by a Dundee United defender. Queen’s Park took the lead with ten minutes left to play thanks to Docherty’s wonderful strike, a worthy “Goal of the season” contender from the edge of the box, set up by McManus. When asked about the goal, Docherty said, “It was a lucky strike, I just connected well and hoped it went in.” However, there was much more than luck involved, and the goal demonstrated her incredible shooting technique. Kirk made one final substitution, with Hannah Fulton coming on for Kerr.

There was more excitement last five minutes when it looked like Fyfe would kill the game off with a third goal; however, she was deemed to be in an offside position. Finally, Queen’s Park did get their third goal: striker Samantha McManus opened her account after she capitalised on a chance presented to her. This was the last action before the final whistle, and the Spiders will be looking to build on this performance when they host Kilmarnock next week at home.