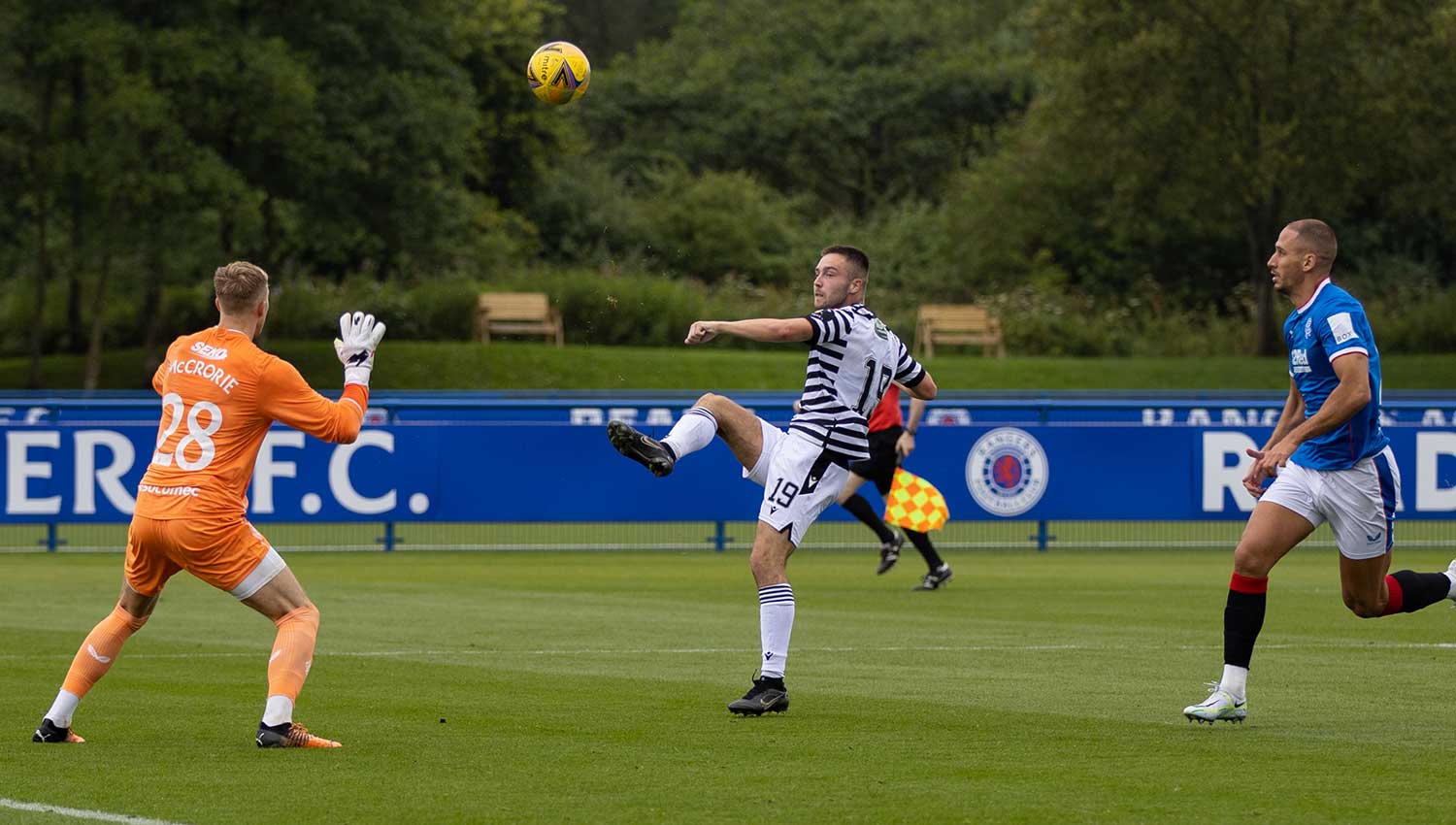 Young Queen's Park put in an excellent performance against a very strong Rangers side mainly composed of first team players, six of whom played in the Europa League Final two months ago, today at the Rangers Training Centre. Experience told in the end with Rangers running out 3-2 winners after going 2-0 behind to a Scott Williamson double.

It was a young Queen’s side that took to the immaculate playing surface of the Rangers Training Centre, with only Jason Naismith, Lewis Moore and Scott Williamson experiencing first team football so far this season.

Rangers started strongly, maintaining possession and control of the ball during the early phase of the game.  They had a couple of shots on goal which were easily dealt with by the Queen’s defence.

Queen’s begin to fight their way back into the game.  In the 12th minute Lewis Moore forced a corner after a pacy run down the left.

In the 18th minute Scott Williamson stepped onto a through ball, beat the advancing Rangers keeper McCrorie only to see his shot come back off the bar.

McCrorie had to be on top form twice in the next few minutes to deny Queen’s attacks.

In the 27th minute Queen’s pressing paid off when Scott Williamson ran onto another through ball and calmly placed the ball to the keepers left into the corner of the net.

Nine minutes later Queen’s had a good chance to double their lead when Liam McQuaid played a ball to Jason Naismith who in turn moved the ball to Lewis Moore.  Lewis turned and shot but his effort missed its target.

In the final minute of the half Jacques Heraghty pulled off a fine save diving low to his right to push the shot away from goal.

Queen’s had the best possible start to the second half when Scott Williamson doubled his total and Queen’s one minute into the half.

Rangers picked up the pace and pulled one back a minute later when the ball was forced over the line from inside Queen’s six yard box.

Both sides continued to push for goals with both Gregor Nicol and Lewis Moore coming close.

At the other end Jacques Heraghty twice denied the home side getting the equaliser.

In the 74th minute Rangers were awarded a penalty when one of their forwards was brought down.  The very experienced Steven David shot low to his left only to see Jacques Heraghty push the ball away.

In the 78rd minute Rangers drew level when Lovelace slotted the ball in at the next post from six yards out.

Queen’s then replaced the trialist with Alex Fairlie.

In the 84th minute Rangers scored what turned out to be the winner. Mateusz Zukowski drove down the right flank and pick out Lovelace who send a fast-paced ball across goal into the far corner of the net.

Queen’s then made their final substitution of the match replacing Gregor Nicol with Lucas McCormick.