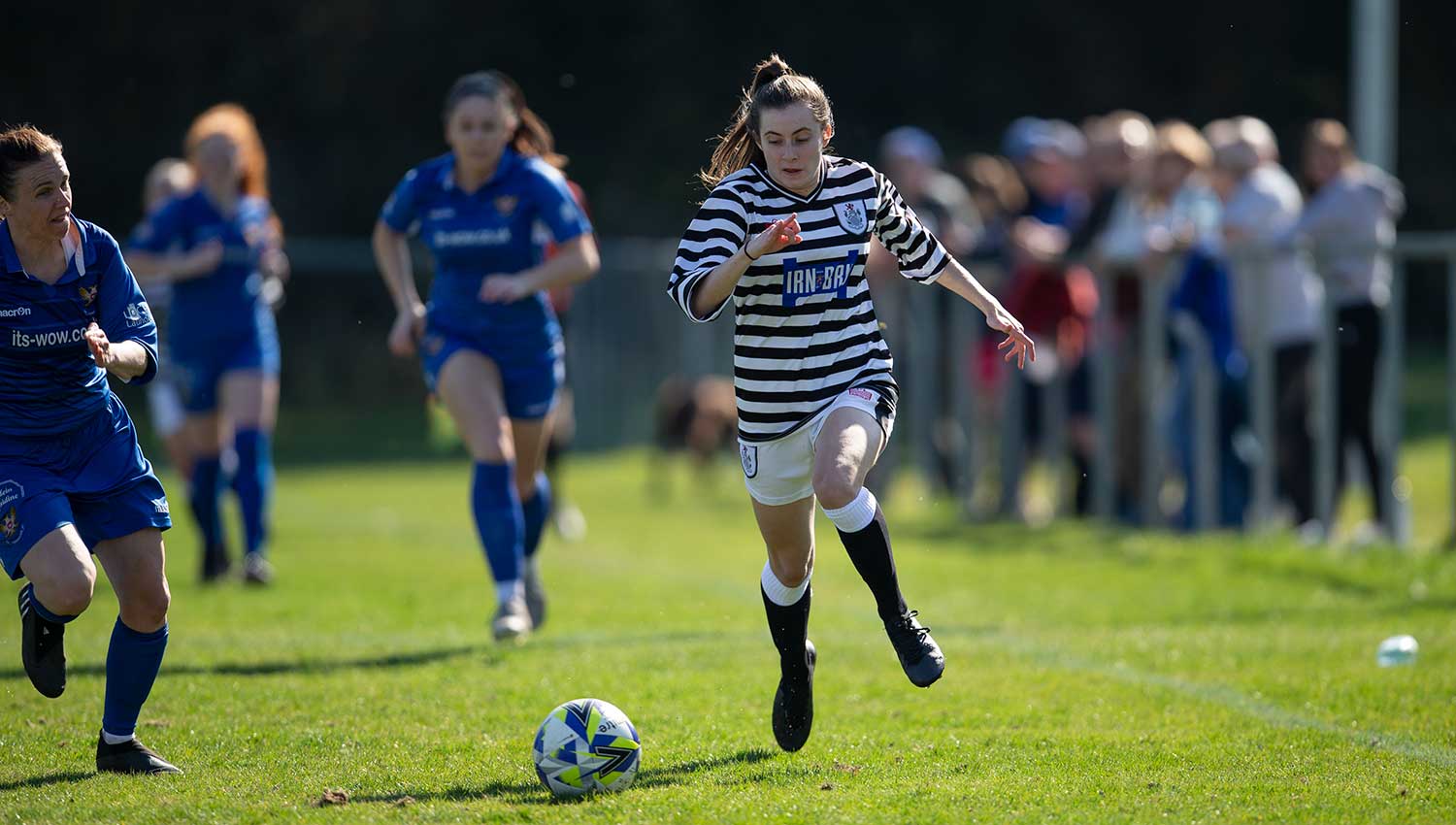 Despite fighting back to draw level, two last minute goals deny Queen's any points at Perth in Sunday.

Coach Barry Rodgers made one change to the starting 11 from the previous game against Boroughmuir Thistle, Lauren Kay replaced by Holly McIndoe.

Queen’s started the game on the front foot.  On-form Rachel Connor was finding space down the left and was using her speed to get beyond the Perth defence.

Three minutes into the game, Rachel latched onto a through ball, cut inside and let loose a shot which narrowly missed the far post.

Two minutes later Nina Fitzsimmons intercepted a St Johnstone attack and played the ball wide to Rachael Connor.  Rachel took the ball to the bye-line before cutting the ball into the middle for Abby Callaghan who, from 16 yards out failed to hit the target.

Despite Queen’s dominating most of the opening period, St Johnstone opened the scoring in the 6th minute. Queen’s failed to defend a long ball from a corner, delivered to the back post, and St Johnstone’s Hannah Clark bundled the ball over the line.

Despite this setback Queen’s still continued to take the game to the Perth side.  They had a number of possible chances but failed to capitalise.  St Johnstone were well organised in defence and, in particular, fast in the break and getting the ball behind the Spiders defence.

In the 15th minute it was from on of the Perth side’s fast breaks that they doubled their lead. A through ball was not dealt with, by the Queen’s defence, allowing Ellie Cowie time to lob the advancing Sarah Rhind.

Just before half-time Queen’s got a goal back. A corner from the left was delivered right under the St Johnstone bar and Abby Callaghan pounced on the loose ball to fire the ball into the net.

A minute into the half Sarah Rhind had to be alert to push a St Johnstone shot away from goal.

The second half was a bit scrappy with neither team dominant. The dry bobbly pitch combined with strong sunshine was having an effect on play.

In the 79th minute a brilliant solo effort by Rachel Connor drew Queen’s level.  Rachel received the ball wide left.  She cut in, beat two defenders, before unleashing an unstoppable shot from 30 yards out.  A great goal.

St Johnstone respond by scoring one almost from the re-start. A free kick played into the Queen’s six yard box is not cleared and Alexandra Robson knocks the ball home.

Just before the final whistle the Perth side added a fourth. Again, a long ball eluded the Queen’s defence and the St Johnstone forward was in the clear before being upended by Sarah Rhind. Alix Moodie scored from the resultant penalty.