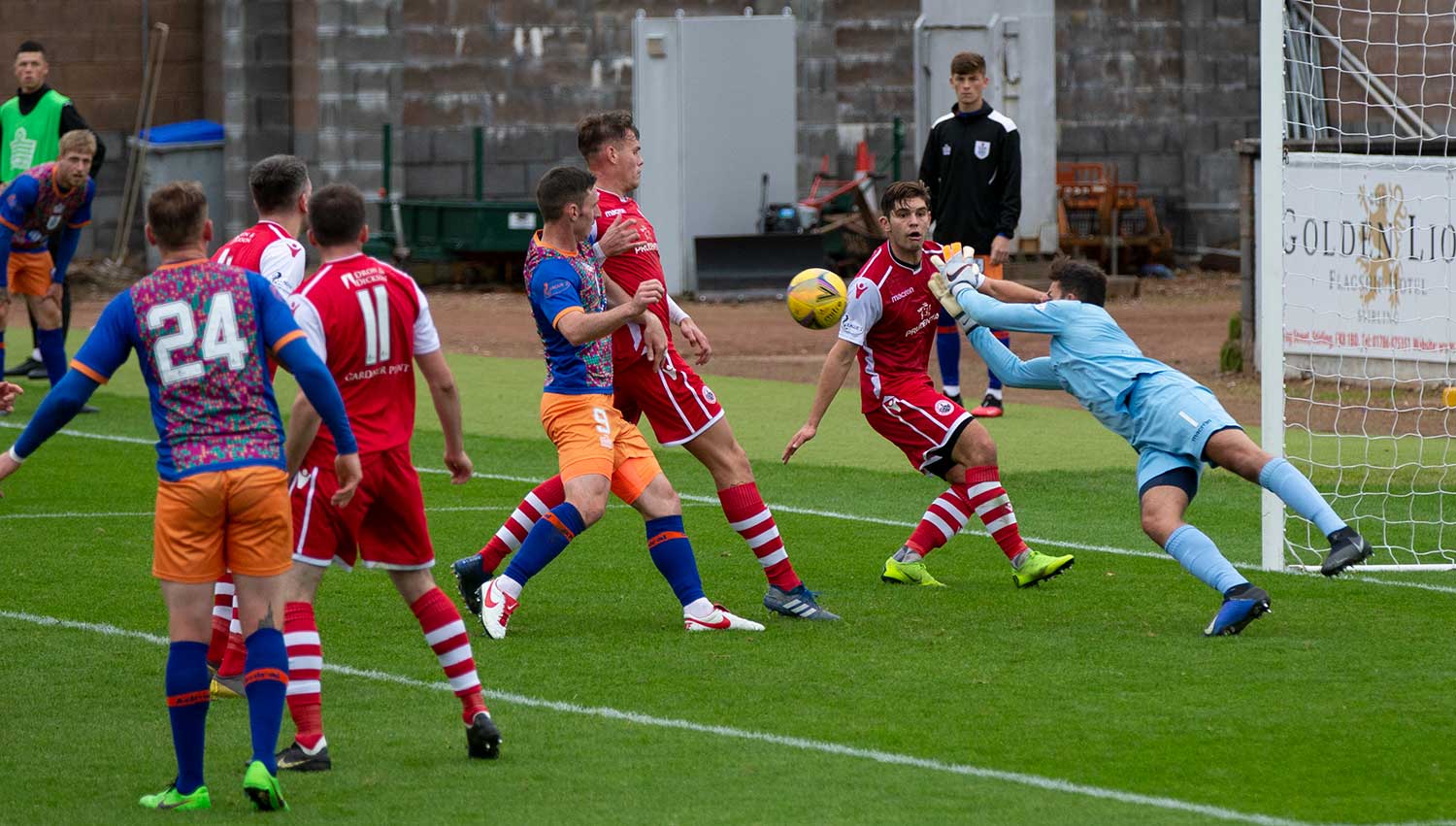 Finally, Queen’s Park commenced league duty away to a Stirling Albion side we beat on the opening day of last season. The Spiders were on the road for the third time in eight days and travelled to Forthbank Stadium in search of their first goal of the season.

Ray McKinnon went into the game with the same pool of players available as he did for last Tuesday’s 1-0 defeat at Cappielow. Craig Slater, who despite recently returning to training, missed out through suspension alongside the injured Simon Murray and Cammy Bell. The head coach made only one change to the starting line-up with Ross MacLean coming in for David Galt.

Willie Muir made his 150th league start for the club in goals with Lee Kilday and captain Peter Grant ahead of him at the heart of the defence. Michael Doyle, who made his senior debut with the Binos, and Englishman Tommy Robson would look to provide offensive support from the fullback positions.

The experienced Grant Gillespie partnered Darren Lyon in central midfield with MacLean on the right, and the versatile Louis Longridge deployed on the left. McKinnon again started with two upfront: Will Baynham and Bob McHugh given the nod to lead the line. Galt was joined on the bench by Stuart Morrison, Brody Paterson, Calum Biggar, Max Gillies, Jacques Heragthy and a striker Trialist.

With both his first and second choice goalkeepers ruled out, this presented Stirling manager Kevin Rutkiewicz with a pre-match headache. Last-minute emergency loan recruit Harry Stone started between the sticks for the Binos. It was a Stirling squad that contained a few familiar faces with Kieran Moore starting alongside Kurtis Roberts (who had joined the Forthbank side after a season at Airdrieonians). Rutkiewicz also named Dominic Docherty and Lewis Magee as substitutes.

It was a calm overcast October’s afternoon, conditions which were in stark contrast to when the sides met last February. Despite being battered in Storm Ciara’s gale-force winds, the sodden Spiders triumphed 3-1 thanks to a dramatic late fightback. Super-sub Moore fired a brace either side of an ambitious long-range strike from Grant which squirmed its way past the unfortunate Binos ‘keeper. At long last, the meaningful action has returned, and more memorable moments are sure to transpire as the league campaign unfolds.

Both teams entered the field from opposite stands, and the Spiders reverted to their much renowned Most Historic Kit. Following all players and officials taking a knee, referee Graham Grainger blew his whistle for the beginning of the long-awaited League Two season.

With only three minutes played, it was the Binos who had the first chance of the game. Industrious work by Roberts setup target-man Dylan Mackin, but his shot from a distance was deflected wide of the near post.

There were only five minutes on the clock, and the Binos were threatening again. The ball broke to Roberts’ wand of a right foot on the edge of the area. However, his well-hit strike flew just over Muir’s crossbar. The Spiders fans will be all too aware of his capabilities from that distance!

The home side continued to press for the opening goal and were presented with a golden opportunity when Kilday fouled Andy Ryan just outside the penalty area. David Wilson stepped up and struck a powerful effort towards goal, but Muir somehow managed to get the faintest of vital touches as the ball smashed against the crossbar.

Almost half an hour played, and Queen’s had their first shot on target. Baynham outmuscled Binos defender Paul McLean and turned into space around thirty yards from goal.  Unfortunately, his dragged effort barely troubled Stone in the Stirling goal.

As half-time approached Jack Leitch, elder brother of former Spiders loanee Robbie, sought to capitalise on a defensive slip by the recently booked Kilday. He advanced dangerously into the penalty area, but the midfielder’s effort agonisingly flew across the face of the goal.

Despite having plenty of the ball, the Spiders were unable to create any clear-cut opportunities against a compact and well organised Binos defence.

Five minutes into the second half and it was Queen’s who started the brighter of the two sides. Wilson bravely blocked Gillespie’s rifled effort, and the ball broke to Longridge on the edge of the area. He ignored Robson’s overlapping run and cut inside himself; however, debutant Stone collected his weak shot with ease.

An hour played, and Queen’s were gradually starting to build up some momentum. The relatively untested Stone dropped Longridge’s floated corner. The ball then fell to Grant with his back to goal, but he could only manage to scramble his effort into the side netting whilst under pressure from a crowd of desperate Stirling defenders.

Head coach McKinnon then made his first change of the game: Galt was brought on to the left side of midfield replacing MacLean as Longridge shifted to the right flank. Queen’s went in search for the first goal of the game. However, it was the troublesome Ryan who went close next for Stirling. Roberts played the ball forward, and Ryan outpaced Kilday, but he pulled his effort wide across Muir’s goal.

The introduction of Galt seemed to give the Spiders an additional spark. He played a ball out to Doyle who strode forward and shot over from a distance. It was not the best of attempts, but it signalled Queen’s increasing intent to press on.

With almost ten minutes remaining Queen’s broke forward down the left. Robson chipped a tempting cross into the box and Baynham leapt well unchallenged, but Stone saved his header back across goal.

The home side appeared to be tiring as Queen’s had pinned them back in their defensive third. Manager Rutkiewicz sensibly added fresh legs with wide-man Scott Roberts and forward Declan Byrne replacing Mackin and the tireless Moore.

It was only moments later, and Lyon had Queen’s best chance of the afternoon. Longridge’s ball to the back post was met by the head of Galt, who directed the ball across the six-yard box. Lyon ghosted in unmarked and looked destined to score, yet his mistimed header went harmlessly over the bar.

The Trialist then replaced a quiet McHugh, who had been well marshalled by the Stirling defence.

Galt and Longridge then combined again to set up another great opportunity with five minutes remaining. On this occasion, it was Galt’s deep cross that was headed back into a dangerous area by Longridge. This time it was Baynham with the chance, but a superb block by McLean prevented an almost certain goal for the Aussie.

As the game wore on the Stirling defenders were finding Baynham’s presence and athleticism increasingly challenging to cope with. A minute later and it was the big man’s knockdown that setup the Trialist on the edge of the penalty box. Eager to impress, he shifted the ball out from under his feet and shaped to shoot, but his effort missed the target as the chances of a goal in the game became increasingly unlikely.

Into added time and Ryan countered forward with menace. Grant opted to take down the advancing Stirling striker crudely, and the referee correctly showed him a yellow card. Leitch’s resultant freekick did not trouble Muir and finished well over the bar before referee Grainger blew his whistle for full-time.

Despite being disappointed and frustrated by the result, head coach Ray McKinnon commended Stirling for their defensive resilience. In looking forward to next week’s return to Hampden, the gaffer expressed the need to add more creativity to our play and restore a winning mentality to the squad. He also confirmed that Slater would be available for selection for next Saturday’s home fixture against Albion Rovers.